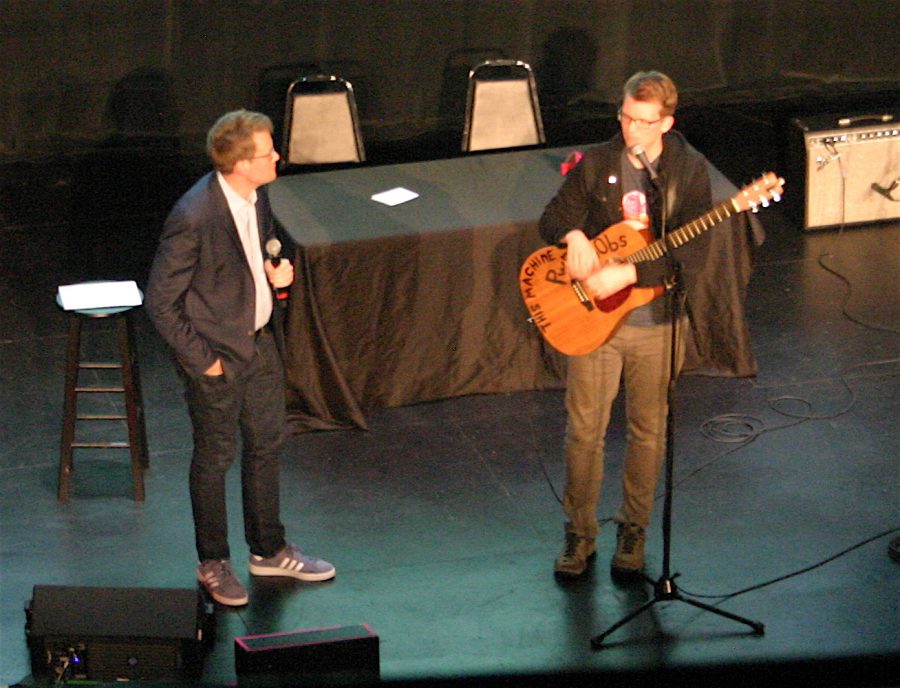 John Green (left) and brother Hank Green on stage at Boston’s Wilbur Theatre on Sept. 26, 2018, as part of the promotional tour for Hank’s debut book, “An Absolutely Remarkable Thing.”

On Wednesday, Sept. 26, Hank Green and his brother John hit the Wilbur Theatre in Boston for the second show of their 12-stop book tour for Hank’s first book, “An Absolutely Remarkable Thing.” They had kicked the tour off in New York City the previous day and had arrived in Boston only a few short hours before their 7 p.m. showtime.

When asked what they had done with these few hours, John had replied that he had caught up with family friends, the Earls, whose late daughter, Esther, became the inspiration for John’s bestselling novel, “The Fault in Our Stars.” (Her mother, Lori Earl, was a guest speaker at the Relay For Life in Watertown a few years ago.) John then added that while he had been doing this, Hank had been sitting in a dark room on his phone the whole time, which got a laugh from the audience.

Hank then proceeded to read an excerpt from the book, telling the audience to follow along in their copies, so that it was almost like reading time in the biggest fifth-grade class ever.”

The Wilbur Theatre, which resides right in the middle of the Theatre District in Downtown Boston, is absolutely stunning. With a huge seating section on the floor as well as two balconies, small sconces in the walls, and standing room, it seats about 1,200 people. And by the looks of things, that capacity was filled on this particular September Wednesday.

The stage was set with a table and two chairs, as well as a guitar on a stand at the front of the stage and a stool next to it. In the left corner was a lectern with a microphone attached. On the wall behind the stage was a white screen with a photo of Hank’s new book projected onto it.

The event was kicked off by a representative from Brookline Booksmith, who had been responsible for passing out copies of “An Absolutely Remarkable Thing” to people as they entered the theatre. Each copy was hand-signed by Hank, which he had done before the show and seemed a superhuman feat considering the sheer amount of people in the theatre and the fact that each and every one of them had received a book.

Then a short introduction video played on the screen that talked a little about the history of the internet and then introduced Hank to the stage. The audience roared as he walked onstage toting a copy of “An Absolutely Remarkable Thing.” After the audience calmed down enough for him to be heard through the mic on the lectern, Hank greeted the audience and briefly explained the plot of his book.

“An Absolutely Remarkable Thing” is a story about a girl named April May, a 23-year-old art student living in New York City. When she discovers an enormous robot statue on her way home from work, she names it Carl and makes a video of herself interviewing it with the help of her friend Andy, who posts the video to his YouTube channel. Overnight, the video goes viral and suddenly April finds herself at the center of a huge mystery: There are 64 Carls all around the globe and they were all installed in the exact same five-minute window of time. Who put the Carls there? What are they made of? Why and how are they connected to the Queen song, “Don’t Stop Me Now”?

Now suddenly famous, April must figure out these mysteries as well as the mysteries of herself. “An Absolutely Remarkable Thing” is the first installment of a two-part book deal.

Hank then proceeded to read an excerpt from the book, telling the audience to follow along in their copies, so that it was almost like reading time in the biggest fifth-grade class ever.

After talking about the excerpt for a few minutes, Hank went on to answer a few pre-picked questions from the audience.

Question: “How did you choose the songs in the book?”

Answer: “It’s a different story for each song.” He then explained that the main song featured in the book, “Don’t Stop Me Now” by Queen, was named the best top-40 song ever based on a study he had read, and he completely agreed.

Question: “Were you influenced by ‘The Day The Earth Stood Still’?” (This is a 1951 movie featuring robots and aliens.)

Answer: “Kind of, but no. ” Hank explained this cryptic answer by saying that though he had never actually seen the movie, he had heard of it and so he may have subconsciously taken inspiration from it. He explained, “We are all deeply influenced by each other.”

Question: “Why the name Carl?”

Answer: Hank felt like the name really worked for a specific scene in the book, but on a more metaphorical level, the etymology of Carl basically said it means “man” or a strong or working-class man, which he felt was an interesting juxtaposition with a robot.

Question: “How was managing the pressure of writing a book for such a big audience?”

Answer: It was actually very good because he already had a fan base so he knew that his book would be read and probably received well.

After the question period was over, Hank mysteriously said, “I’m going to leave the stage now” before disappearing behind the curtain. Some static from the microphone ensued and after a minute, Hank re-emerged, but in a giant bee costume.

The bee introduced himself as “Dr. Alfred Bumbly” the “son of a hard-working bumblebee and a midsize SUV” from Quincy, Mass. He then proceeded to give a lecture about the history of robots, using a slideshow that was projected onto the screen behind him. He explained that though robots really got started in the1960s, the term was first used in 1920, post WWI, “Robot” being derived from a Czech word for the people who would work on the land of a rich person for no pay. He also quipped, “The robot is a canvas onto which we project our hopes, dreams, and fears.”

Dr. Bumbly also imparted a few words of wisdom on the audience: “Our beliefs shape our reality, so we have to be careful what we believe and value because we will pass it on.”

Then Dr. Bumbly left the stage and Hank reappeared, stepping to the front of the stage and picking up his guitar. He first sang a song he had written while in the writing process for “An Absolutely Remarkable Thing.” The song was about the pressure a writer faces and how he, along with millions of other fans, had put that same pressure onto J.K. Rowling when the Harry Potter books were still being written.

Next he sang a song about life and death, which had an impossible number of words, was sung at an impossibly fast speed, and had a chorus that started, “We’re all gonna die.” Lastly, he covered Carly Rae Jepsen’s 2012 hit, “Call Me Maybe.”

When this final song was over, Hank finally invited his brother, bestselling author John Green onstage. The two sat down together at the table and, after saying hello, encouraged the audience to register to vote.

Then the brothers went on to answer some audience questions that were directed at both of them. The questions spanned all topics, from how to deal with stress (“Take a bath”) to parenting advice (“It’s like riding a bicycle, except you never learn how to do it”) to how to get past crippling writer’s block (“by [just] writing and giving yourself permission to suck”). Lastly, “Where and when would be the worst place to release a quail?” Which was answered with “a dance recital” and “your [bath]tub”.

Next, an audience member was invited to the stage and was asked to read Trivial Pursuit questions that each brother had written for the other. They blindfolded themselves, held hands, and gripped blow-up baseball bats. Every time one of them got a question wrong, which was most of the time, the other got to hit him over the head with the inflatable bat.

After this hilarious ordeal, the guitar returned as the brothers sang together along with the audience in a rendition of “All Star” by Smash Mouth. Then John said goodbye and left his brother on stage to conclude the evening.

Hank walked back over to the podium and proceeded to give a talk on the internet and his personal relationship with it. How it has both good and bad aspects and his personal journey in finding a way to balance out these aspects to form an overall picture of it as a whole. He explained that basically, “We have a tool that we don’t know how to use,” also saying that, “the internet is a place and the people who spend time there are its citizens.” He concluded his speech with this simple statement: “The internet is good. It is also bad.”

Amid the audience’s cheers for his speech, John walked back on stage. Together center stage, the brothers very graciously thanked the audience for coming and then with a final wave, they exited, each leaving through a different side of the stage.