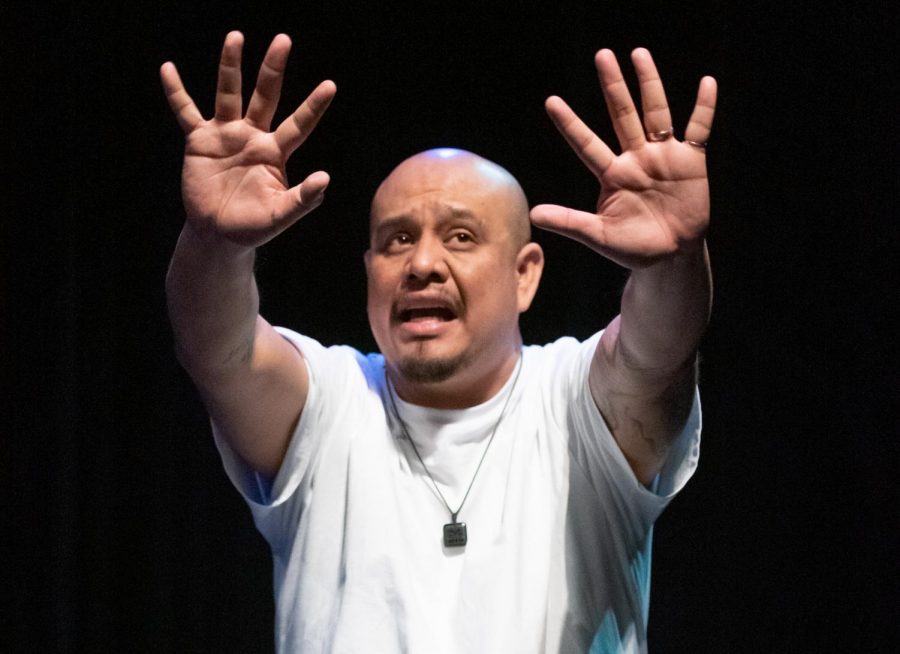 “WET: A DACAmented Journey,” now playing at Emerson Paramount Center through Nov. 25, is the life story of Alex Alpharaoh as a Guatemalan undocumented immigrant.

Coming into the country at only 6 months old, Alpharaoh explains the struggles of his childhood because of his lack of documentation. His mother came to America with him to join his father. Not being a citizen led him to be bullied constantly during his childhood. Instead of the typical begging, children sometimes do for the toys their peers have, Alpharaoh would desperately beg his parents to obtain legal papers.

Overall, Alpharaoh provides a moving summary of his life as an undocumented immigrant, and gave us a better perspective on the political climate at the moment.”

As Alpharaoh grew, he found many small and large inconveniences that accompanied the life of an undocumented immigrant; work was hard to find, travel was risky, and everyday life was always liable to be flipped on its head. Alpharaoh details being arrested for faking a social security number, his experiences with Obama’s DACA program, and the terror of travel outside of the country.

With the additive cultural details, as well and familial values one comes to better understand the background of someone like him. In these experiences, Alpharaoh displays perseverance and humanity, advocating for the many undocumented immigrants like himself in a time of division around the prospect of undocumented immigration.

Alpharaoh was an amazing actor. Putting on a one-person show, he must convey the entire plot by himself. He played both himself and his family distinguishably, giving the audience the ability to figure out who was talking. Each character had unique traits and they were able to come across that way through just one person. Alpharaoh also holds an amazing ability to influence the mood of the room, through his words and expression, he could make us feel what he felt in those exact moments. It is a show built for empathy, giving us a taste of humanity to better understand the issue at hand.

Much praise should be given for his ability for storytelling, clearly thought-out and organized. It was also notable that he represented his personal experience by integrating Guatemalan culture and his relationship with it. Perhaps one of the most phenomenal points made was that though he lived his whole life in America, and knew nothing about Guatemala, yet that was where he would supposedly be deported to. He only truly felt like an immigrant upon visiting Guatemala, his birthplace.

Overall, Alpharaoh provides a moving summary of his life as an undocumented immigrant, and gave us a better perspective on the political climate at the moment. We have a better understanding of the issue through his concise, but powerful description of such. There were several other valuable details, but the value of seeing it is to experience them for yourself.

There were a few criticisms to be made, as no show is flawless. We couldn’t always see the translations from Spanish because of the way the seating was arranged, so we would suggest sitting toward the middle to avoid that problem, or high up. There were occasional sound problems, but very minor.

The largest criticism would perhaps be the lack of explanation of the importance of this perspective. Currently under the Trump Administration, there is a lot of talk about whether or not undocumented immigrants should be deported or separated from their family. It is a central political issue right now, and Alpharaoh’s journey truly is most valuable in light of those current events. It may have been assumed the audience knew of the current political climate, but we think mentioning the political importance is worth something to the many that may not be aware of it. The show was amazing regardless, but certainly it’s worth reading up about immigration in politics currently before seeing it.

Although the message and concept of this show is something everyone should experience, there is a good amount of swearing, and mature or controversial topics. There are no adult situations or much violent present, however it’s still probably good to keep the age range above 10 or 12 years of age.

The type of audience members that would best enjoy this performance would be someone who enjoys current political issues, or history. Since Alpharaoh does mention his political stance repeatedly, as it is a major part of the story, if you are someone who does not agree with his personal ideas on the controversial topics surrounding immigration and undocumented people that Alpharaoh sides with, it might be best not to put yourself in that position. However on the other hand, if you are open to either having your mind changed, or to learn more about Alpharaoh’s personal struggles with these issues, this is the perfect entertainment for you.

In our eyes, this experience fulfilled what we had expected walking into the theatre, as well as opened our eyes more than we thought possible, walking out of it. The play featured dark topics, while at the same time lightening the mood with comedic representations of other characters using funny voices or exaggerated personalities. The story kept us present in the experience, always keeping us on the edge of our seats there was never a lull in the story or long confusing explanations. Alpharaoh really made every moment feel like he was sharing real personal memories by adding small details, for example some character spoke in Spanish, so there were TVs displaying the translations.

Alpharaoh took the audience through events that we, too, as American citizens had experienced, like the election of President Trump, however Alpharaoh used these opportunities to then explain what they meant to him and how they specifically affected his life, representing the other side of many of the president’s policies.

We had never realized how much one truly cannot do if they are undocumented and all the hardships and struggles they face, from prison to deportation, finding a job is hard as is having a social security number. If we’re being truly honest, though, we were a bit on the fence when the play started and Alpharaoh immediately started chanting and rapping. We felt it was not much of a clear start, or an explanation of what was to come, but after the play started going for a bit, everything was soon explained.

Alpharaoh’s story was emotional, well explained, and by the end of it we felt like we truly understood this very personal part of his life, also helping us relate what we learn about the events in today’s news. All in all, out of 10 we would give it an 8.5 for doing everything expected as well as a bit more, bringing the audience truly to another place.

(For more information or tickets for “WET: A DACAmented Journey”, go to the Emerson Paramount Center website.)