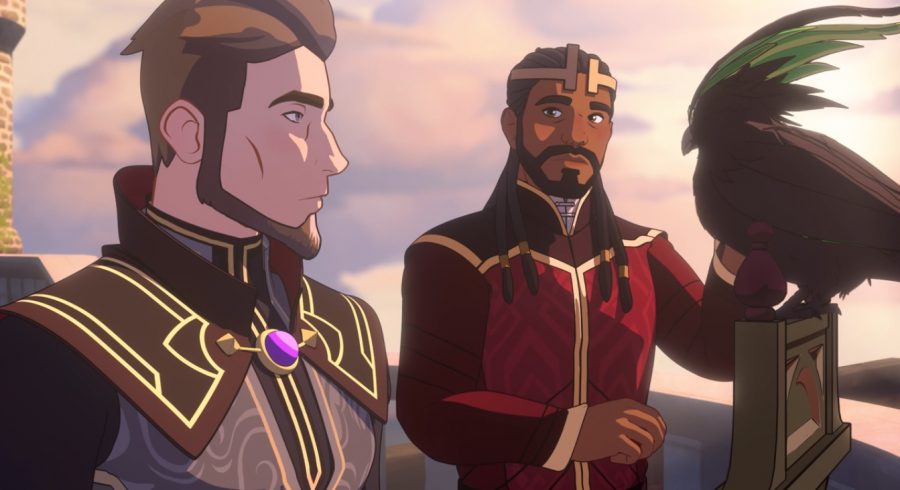 The character of Viren (left) is expanded upon in the second season of "The Dragon Prince".

“Avatar: The Last Airbender” fans rejoice! “The Dragon Prince” is the cartoon’s spiritual successor and it continues to amaze.

“The Dragon Prince” cartoon was created by Aaron Ehasz (a writer on the “Avatar” cartoon) and Justin Richmond (director of “Uncharted 3” video game). They have crafted an intriguing new fantasy world called Xadia, and filled it with intricate character such as Callum, Ezran, and Rayla. These three embarked on a quest to bring peace to their lands by returning the stolen dragon’s king eggs to its parent.

The second season, which premiered on Netflix on Feb. 15, continues where the first season left off on and greatly expands the lore, while also giving some great character development to Callum and Viren. One great improvement over the last season is the animation quality. It feels like they made the animation more fluid/fast paced and, as a result, the show is more enjoyable to watch.

The lore is expanded through flashbacks. As a result, we learn more about certain character backstories. One particular character that stands out is Viren, the current antagonist of the series. His character until now has been conniving and villainous. But, even with that still being the same in Season 2, the backstory adds to his character and shows the more of his human side. He is not villain for the sake of being bad, he doing what he thinks is right regardless whether it’s morally correct or not. If you were to compare Viren to Lord Ozai, a character from the “Avatar” series, one of them is an intimidating villain and the other is a very human character. Viren feels like an actual person, while Lord Ozai feels like a monster. It’s really refreshing to see “The Dragon Prince” portray a more human villain.

One small critique that could be considered a nitpick — but it’s really the only big flaw we have for this season — is the finale. While the episode itself is really good, it just doesn’t feel like a finale. This show is the spiritual successor to “Avatar” and yet still hasn’t captured the season finale vibe “Avatar” had. An “Avatar” finale felt like a epic culmination of the season’s plot lines. “The Dragon Prince” finale doesn’t really feel like this. None of events in the finale had much impact or weight. There wasn’t really a big climax/epic event to end the season on.

Shows don’t need to always have this, but, like the first season of “The Dragon Prince”, we were hoping for something more, some great, big, epic season finale to leave us craving for more. What we got was a finale that was fine, but not epic.

Regardless of the finale though, we really enjoyed this season of “The Dragon Prince” and we’d give it a 9 out of 10.

You can watch “The Dragon Prince” cartoon on Netflix. Currently it has two seasons with nine episodes each. Give it a try and you just might like it.

Vishan Karunaratne is a member of the Raider Times staff.

Johann Mendez is a member of the Raider Times staff.