Audiences will flip for “Corteo” 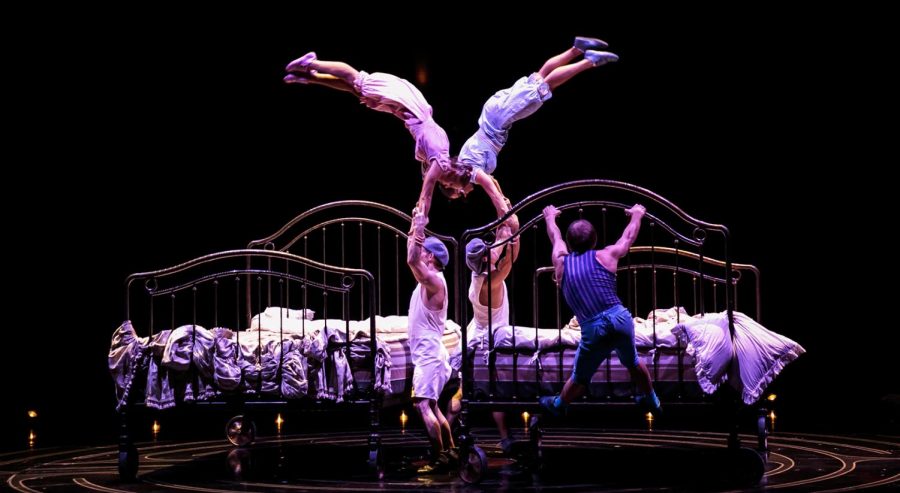 Cirque du Soleil’s latest show, “Corteo”, will be at Agganis Arena in Boston through June 30, 2019.

When you hear the word “circus” you may think of lions leaping through fiery hoops, elephants balancing on pedestals, acrobats flipping through the air, and a ring master with a top hat and red tailcoat.

However, Cirque du Soleil is not your average circus.

The Cirque du Soleil production of “Corteo” at Agganis Arena in Boston through June 30, tells the story of a clown as he celebrates his life with other clowns, jugglers, and acrobats before he reaches the new stage of his existence after life. “Corteo” explores how one’s life is to be celebrated, not mourned. As the show unfolds, the celebration of the clown’s life is filled with flying angels, music, and acrobats performing death-defying stunts.

A highlight of “Corteo” was the acrobats. Moving with fluidity and poise, flipping or jumping about on stage, they captured the audience’s attention. Additionally, one general aspect about the show that stood out was the music and how it connected the storyline, built suspense, and directed the movement of the actors on stage. For instance, in one scene, acrobats jumped on a seesaw, catapulting each other into the air. The bongos kept rhythm and time as the acrobats jumped on the off beat in order to achieve greater height for flipping.

Another example of how the music impacted the performance was when an acrobat climbed up a freestanding ladder. Drums and cymbals were used to build suspense as he climbed higher and higher up the ladder, balancing it with tiny movements. When he reached the top, the audience shouted with glee and the drummer did an upbeat drum solo.

Overall, I highly recommend going to see “Corteo” — or any Cirque du Soleil show — because of the amazing talented performers, the fantastic orchestrated soundtrack and live music, and the overall excitement while watching the performance.

(“Corteo” is at Agganis Arena through June 30, 2019. For more information or to buy tickets, go to the Cirque du Soleil website.)