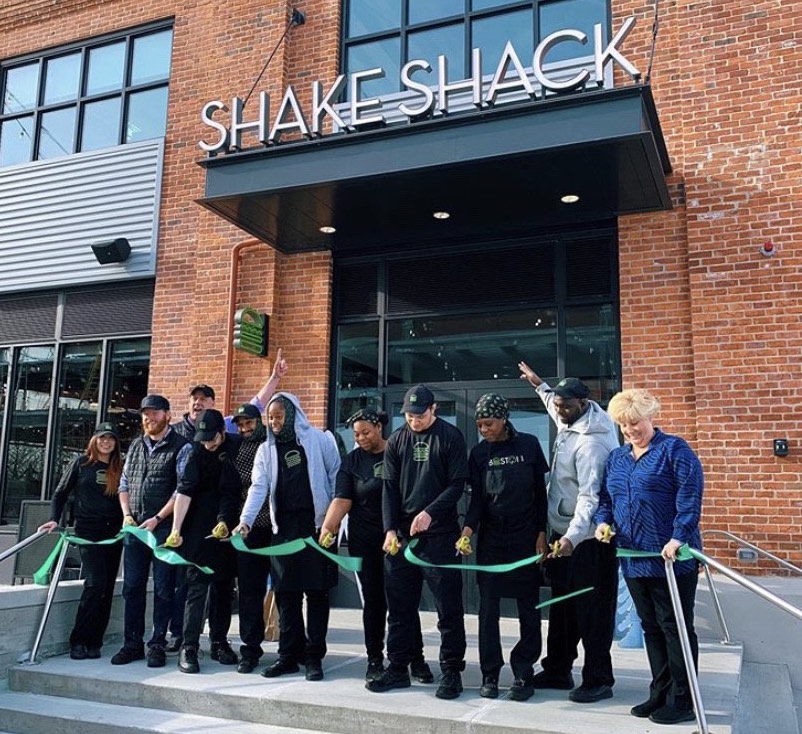 The ribbon-cutting ceremony marked the official opening of the new Shake Shack restaurant at Arsenal Yards in Watertown on Dec. 21, 2019.

Shake Shack had its long-awaited grand opening in Watertown on Saturday, Dec. 21, 2019. Although the restaurant had been open for a few weeks, this was the first day people were able to sit inside and eat, due to food license complications at the Arsenal Yards site.

The energy in the air was palpable, everyone couldn’t wait for this restaurant to open and see if the hype was justified.

After the ribbon-cutting ceremony, people flooded to the doors. The line was out the door after a few minutes! Even at 11 a.m., people couldn’t wait to get their hands on a famous Shake Shack burger.

As the holiday season is here, Shake Shack went for a festive theme. Santa was greeting people as they came in, and there were goodie bags as well. In the bag was a Shake Shack ornament, a present tag, a slap-on bracelet, and a bubble blower. There was a tent with games for kids, but due to the cold weather it didn’t seem to attract many people.

Inside, the restaurant has a modern look similar to other Shake Shacks. There are green and wood walls, with a concrete (very clean) floor. People brought their kids, aunts, uncles, and anyone who wanted a nice meal. Everyone was having a good time.

When I went in I ordered a burger and fries. And, just as expected, the food was as good as ever. The salty Shack Sauce perfectly countered the juicy meat, and the crispy fries were a good snack on the side.

This Shake Shack opening is one of the first openings in the new Arsenal Yards development. Arsenal Yards is a project that started almost two years ago, replacing the old Arsenal Mall with a bigger and better one. The production of the mall has accelerated but this is the first significant opening.

Overall, it was a successful day for Shake Shack. A great crowd came the people got great food and a great time. This restaurant is sure to be successful and will hopefully remain in Watertown for many years to come.

Tino Themelis is a member of the Raider Times staff.