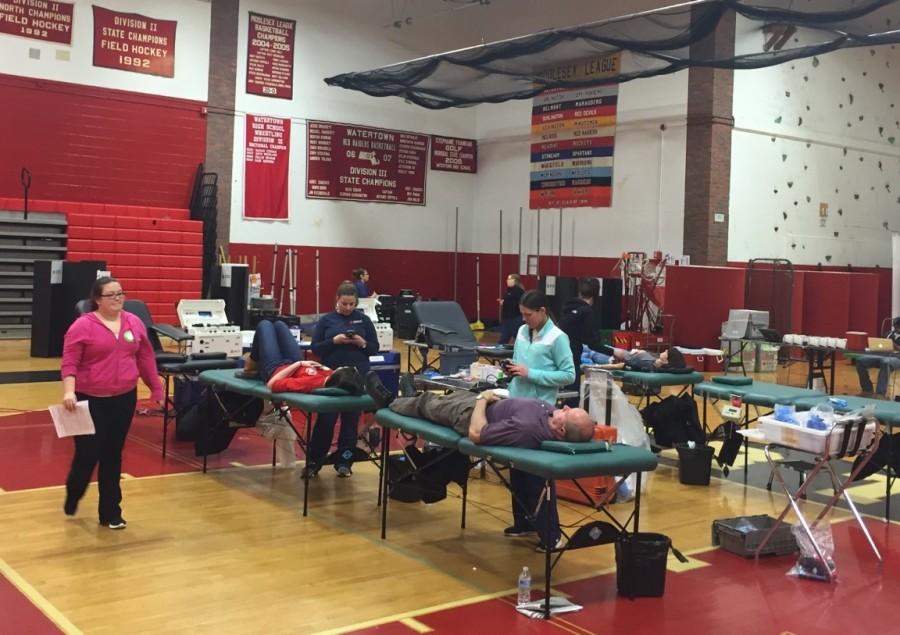 George Hoffman, in purple shirt, was one of the 46 people who donated during the Red Cross blood drive inside the Watertown High gym on Thursday, March 17, 2016.

Watertown High School held a successful blood drive with the help of the Red Cross on Thursday, March 17. There were 46 adults and students that attempted to donate, and the Red Cross was able to collect 32 pints of blood from WHS!

John Rimas, who helped coordinate the event held in the gym, said there’s usually one every year, but this is the second time WHS has had a drive in the 2015-2016 school year.

Many students were excited to donate their blood, including first-timers and repeat donors. For those under the age of 18, the drive required written parental consent, but that didn’t stop underclassmen from stepping up to donate. Additionally, many seniors already 18 years old tried the process and found the experience very rewarding.

Seniors Joanna Lopez and Hillary Ponce were among those giving blood for the first time. Both decided to do it because they thought it was a worthy cause. While waiting to be called to donate, the girls made sure to drink lots of water provided by the Red Cross personnel.

“The more fluids before and after, the better,” said a worker who assigned donors numbers at the signup desk in front of the gym.

Once students signed up, they received a number and a sticker with the words “I make a difference.“ While many had scheduled times when they wanted to donate, there was a clog due to an increase in unanticipated donors. The actual process to donate blood, however, ran like clockwork thanks to the hard work of the Red Cross personnel.

Once numbers were called, people were escorted to a secluded desk where they were registered and underwent a variety of assessments. The first was a quick physical assessment where temperature, blood pressure, hemoglobin, and pulse were inspected. That was then followed by a questionnaire-type test about recent vaccinations, travel history, and personal health.

At that point, if the potential donor passed all the tests, the next step was to check whether their veins were suitable to draw from. For sophomore Julie Der Torossian unfortunately, that was the one place where she fell short.

“They couldn’t find a vein that was big enough since the needle they use is bigger than the average needle used when drawing blood at a doctor’s office,” she said.

Though Julie did have a visible vein, the worker from the Red Cross could not use it to take blood or it would’ve left a very big and painful bruise.

Those who made it past that stage will soon get a card in the mail that states their blood type and other information. More importantly, those who passed finally got to give their blood!

They lay down on a padded table and a worker uses a blood pressure cuff to make a vein arm pop out. After sterilizing the area around the vein, a needle that connects to the blood-sucking machine is inserted, and the donor is given a ball to squeeze every 5-10 seconds to help the blood flow faster.

Once enough blood to fill the bag was drawn, the needle was removed, and students got to relax and enjoy snacks and drinks. Donors have to rest afterward so that their body has some time to adjust to the change in fluid volume.

While getting a needle stuck into your arm sounds like an uncomfortable process, students at the WHS blood drive had nothing to worry about. Caitlynn, a medical assistant for the Red Cross has helped hundreds of people donate blood, and made the process easy and painless for all.