A writer’s story, set in Watertown 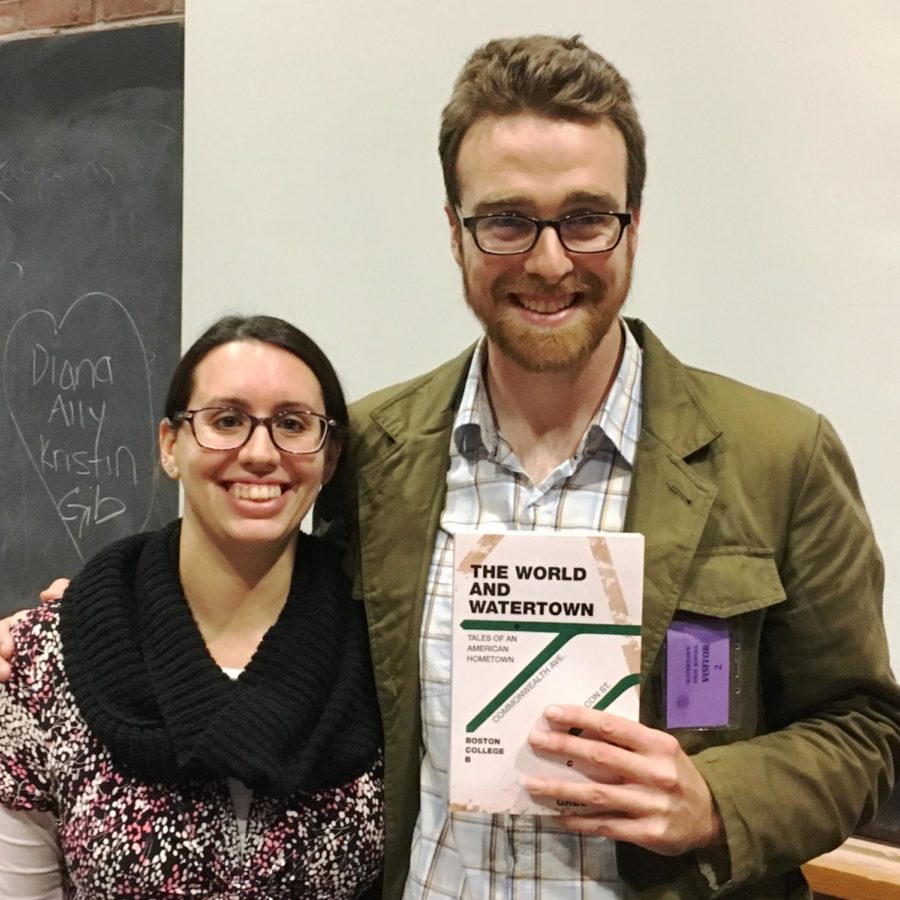 Writing a book is never an easy job. Some people may not believe this, but would you believe it from a published author who grew up right here, in Watertown?

Greg Beach, author of “The World and Watertown” came to speak to Watertown High School students about his book, the writing process, what inspired him, and what it was like to write a book all about Watertown.

As a kid, Beach always had stories running around his head. It was his Watertown Middle School and Watertown High School humanities teachers who inspired him to pursue a career in writing. He loved humanities, because it was a mix of English and history. He even mentioned Mr. Gustafson and Mr. Rimas in his book.

Beach graduated from Watertown High in 2007. He went to Tufts University, with a major in political science. After college, he worked for FoodCorps with Michelle Obama, to try and create healthy food programs, and started working on his book, which was published in June 2017.

He has since moved on from Watertown and is now living in Atlanta and is working as an educator. He has previously taught in Cambridge and Boston.

To him, nothing can replace his home town of Watertown.

“I loved growing up here,” he says.

The moment Beach realized he wanted to start writing his book was after the Marathon bombing of 2013. The War on Terror was brought to Watertown, but he realized our town is much more than just that event, and that he wanted to share this message with the world.

He was inspired to write about Watertown’s relevance in history and in today’s world.

While Beach was writing his book, he learned about Watertown’s fascinating history. The book is a collection of stories from Watertown natives, and shares the culture of Watertown.

You may ask, “What did it take to create this book?” Beach put on hours upon hours of work, researching Watertown’s history and reading other books similar to how he wanted his to be. He also spent time interviewing locals and, during this process, he discovered many powerful stories of people doing small things that eventually turn into big things.

“Being able to tell a story is the best way to get your issue across,” says Beach.

He discovered information that he had never heard of before, that he believes everyone inside and outside of Watertown should know. While writing, he was constantly figuring out how he wanted to portray himself through his words.

While talking with WHS students, Beach bestowed some important advice to anyone looking to write a book. He says that if it is a nonfiction book, make sure to check your sources. The best thing to do in writing is “show, don’t tell.” He also believes a good editor is key, saying that you want an editor who can understand your feelings and idea. (His editor was a friend that he grew up with, so he checked that box off fairly easily.)

He says that two very important things for him are clarity and brevity. He was asked what the best part about writing this book was. He said, “To be here with you all 10 years after I graduated.”

He also noted that this book will forever be a part of the Watertown Public Library.

“It will outlive me and that’s rewarding, too,” he says.

His advice to upcoming writers? “Read a lot and write a lot. Find a good editor. Embrace your mistakes.”

What are some of his beliefs that stuck? “Being able to tell a story is the best way to get your issue across,” and “You putting those words down matters.”

He is currently working on political thriller based in Atlanta. Although he has moved on to Atlanta, we will for sure be seeing Greg Beach in Watertown soon.

What draws him back? There’s a good chance it’s the friendly faces throughout the town, and of course, the pizza.