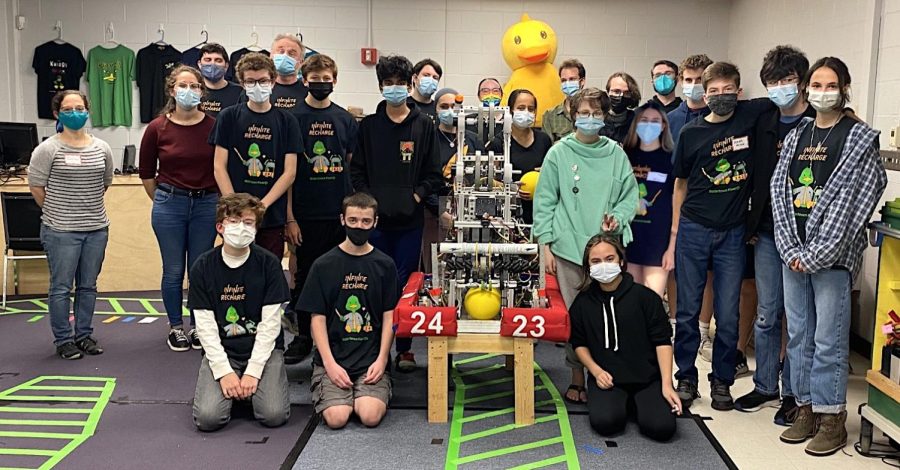 Every Tuesday at 7 p.m., the Watertown High Robotics club meets in the robotics lab to innovate and learn.

As you walked around the Activities Fair back during your first few days of the school year, you may have noticed something odd: A large, comical duck costume propped up behind one of the club tables.

This club was none other than the KwarQs, otherwise known as FIRST Robotics Team 2423, a competitive Robotics Club operating out of our very own Watertown High School that engages in learning opportunities, projects, and competitions against international teams.

For some students, they may not be inclined to join the Robotics Club due to a lack of knowledge or savviness with technology or engineering.

“There’s always a lot of things to do, it’s not all engineering,” stated Amory Galili, a Robotics coach of seven years. “So whatever you like, there’s probably something for you, so come join the Robotics team!”

Dubbed the “KwarQs” and taking a duck as a mascot due to the fact that when a Bostonian says that word “quarks,” it sounds like they’re saying “quacks,” the team gathers every Tuesday at 7 p.m. to innovate and learn. Their activities are defined by the season: In the fall, they learn about mechanics and programming; Motors, sensors, programming LEDs, and the like. During the winter, a challenge to build a competition robot is unveiled and the robots are put together, with the competition season in the spring.

“I enjoy doing the [autumnal] exercises and doing them with friends because they are fun but also make you learn as well,” commented Anna Hermans, a freshman.

The KwarQs team has been participating in FIRST (For Inspiration and Recognition of Science and Technology) competitions for years, and has been winning awards since it started competing in 2008, during which it won the FRC Rookie of the Year award, and were later invited to the FIRST National Championships in Atlanta.

As always, the criteria and constraints for the competitions in 2022 will be unveiled in January, and the build season, which the team will spend designing and building their competition robot, will begin. In the meantime, the club is spending their time learning the basics of engineering and coding, and doing activities related to things such as LED programming, motors, and spring-loaded systems.

The club is overseen by an experienced group of coaches and mentors. Coach Travis Norris, a coach alongside Coach Amory, is a FIRST alumni who went to the FIRST world championships. After going to Worcester Polytechnic Institute, he became a software engineer.

“I was on a Robotics team in high school, and it was really fun for me and was a program that I really liked,” he reminisced. “I wanted to get involved after becoming an engineer, I wanted to give back to the same organization that taught me a lot . . . We’re always looking for new students, if anyone wants to join, feel free to come by on Tuesdays at 7 p.m. I think it’s a really fun time.”

For more information about the club and how to join, go to www.team2423.org or email [email protected]