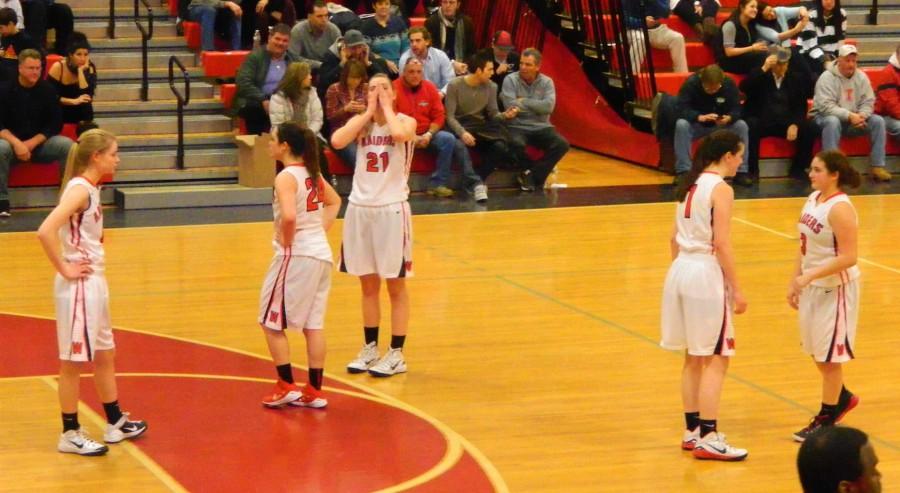 Gallery|10 Photos
After a night of struggles, the Watertown girls’ basketball team could finally take a moment for itself at the end of its Division 2 North game against visiting Tewksbury on Thursday, Feb. 26, 2015. The undefeated Raiders won, 49-45, to advance to the sectional semifinals against Belmont on Tuesday, March 3, at Mystic Valley High in Malden.

It’s been smooth sailing into the playoffs this year for the Watertown High girls’ basketball team, winning all but one game this season by double digits, and taking an 18-0 record and the No. 1 seed into the MIAA Division 2 North sectionals into the state tournament.

But things got a little tense in the Raiders’ opening-round game Thursday against Tewksbury, however, and it took some big plays from junior Michaela Antonellis and sophomore Shannon Murphy down the stretch to lock up a 49-45 home win.

For the WHS girls, the eighth-seeded Redmen (12-9) seemed to catch the Raiders off guard off the bat, running a full-court zone press from the opening tip, forcing the Raiders into a lot of early turnovers.

“We were prepared for their presses, but we kind of shied away from the spots we needed to be at,” said Watertown head coach Pat Ferdinand I think when we were trying to secure the ball and transition quickly, we rushed and made poor decisions in transition.”

The Raiders found themselves in unfamiliar territory early on, entering the second quarter knotted at 11, and trailing at halftime, 21-19, for the first time all season.

“I thought we did a really poor job with decision-making,” said Ferdinand. “They did a great job giving us multiple looks defensively. We were making rushed decisions and not being patient enough, and that cost us early on.”

Despite the setbacks, the Raiders finally restored order in the fourth quarter, quickly opening an eight-point gap and breaking the game open for the first time.

A big portion of the credit for the turnaround could be directed toward the stellar second-half play of Antonellis. Whether it was driving to the hoop and converting key and-ones or getting back on defense for emphatic blocks, Antonellis (12 points, 5 assists, 3 blocks) was instrumental in swinging the momentum back Watertown’s way.

“Early on our shot selection wasn’t great,” said Ferdinand, “but as the game progressed into the second half, I think we did a better job with getting the ball, finding matchups, being patient, and making decisions and reads.”

Murphy, a big factor in the Raiders’ success this season, also came to life in the second half. After running into foul trouble in the first quarter — only scoring 2  points and sitting most of the first half — Murphy helped lead the charge for the Raiders down low, finishing with 15 points and six rebounds on the night.

Murphy also had a hand in what was likely the biggest play of the game. With the Raiders up just 3 points, Murphy grabbed a huge offensive rebound of a Rachel Morris miss, got fouled on the way back up, and sank two free throws to seal the game with 19 seconds remaining.

A Tewksbury 3-pointer and two more Watertown made free throws, one each from Antonellis and Murphy, left the score at 49-45 at the final buzzer.

The close win sets up a big Division 2 North semifinal grudge match against the Marauders of Belmont (14-6, No. 5 seed). the game will be played Tuesday, March 3, at 7 p.m., at Mystic Valley Regional Charter School in Malden.

“We gutted it out,” Ferdinand said of the win. “[Tewksbury] played hard, and they did an excellent job, they played us well. We feel blessed to be able to play another game.”

The WHS boys (11-9) are done playing this season however. Senior Mike Hagopian’s 16 points weren’t enough to push the Raiders into the quarterfinals on Wednesday night against Bedford (7-14).

Sophomore Thomas Greaney led the Buccaneers with a game-high 26 points to go along with five blocks.  He dominated the boards all game, which led to many second-chance points, and setting up other players for open shots.

Buccaneers freshman Isaiah Cashwell-Doe, senior Peter Whallon, and junior Zach Walters all put in a great effort with hitting threes on one end then playing stellar defense on the other.

Watertown senior Nate Munson-Palomba put up his best scoring effort of the season with a solid 16 points, while captain Brendan Hoban in his return from a thumb injury put up 11 points and added four steals to the totals.

Watertown, hampered all night with big men Angel Carrion and Derek DiPietrantonio in foul trouble, fought until the end but couldn’t pull it out, as Bedford, the 11th seed in the Division 3 North sectional, moved on to face face No. 3 Arlington Catholic (15-5) on Saturday.

Lauren Petrillo is a member of the 2015-16 Raider Times staff.