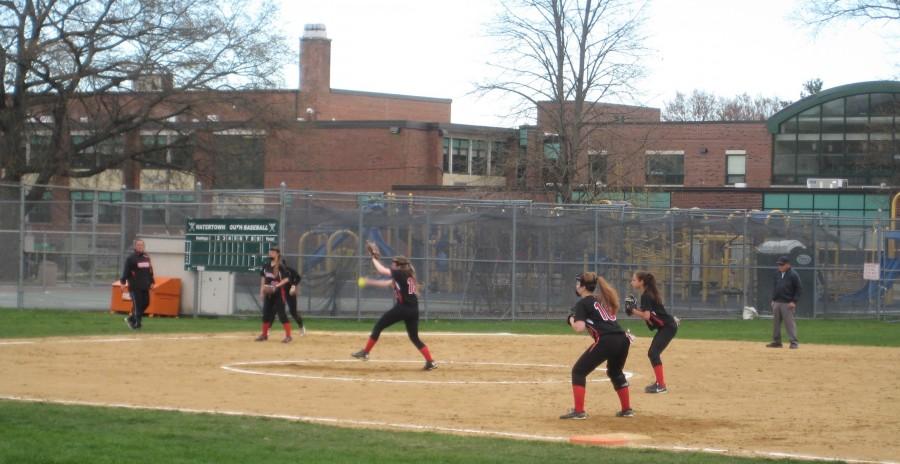 It is early May and the Watertown High School softball season is in full swing — literally!

With eight freshmen on the team and 12 returning players, it is by far the most promising season yet. When last year’s seniors graduated and second baseman Eva Alessandroni suffered a torn ligament in her thumb, many spots needed to be filled and the freshmen were quick to step up to the plate. Pitcher Destiny Santalucia, catcher Cali McMahon, first baseman Jacquie Furbish, second baseman Stella Papadopoulos, and third baseman Stephanie Laskaris are all new additions to the team.

Because of the crazy winter and sea of snow on the field, the first month of practices were held indoors, but that didn’t slow them down. Coaches Jim Swift, Kim Boyd, and Ellen Breen were thrilled to get outside and start working.

Practices are intense with sprints and push-ups as punishments for dropped balls and bad throws, but this only motivated the team to get better. At the end of each practice, Coach Swift introduced a challenge for the team, whether it be getting six outs with no errors, or catching a bunch of fly balls, or making a number of perfect throws.

The first game was held on April 7 against WHS’s rivals, Belmont. Although Watertown didn’t win, there is a rematch scheduled this month, and with the improvements made, it should be a close and exciting game.

Despite that the WHS softball team hasn’t yet won a game, it gets closer each time and a win is in the near future. Captains Francesca Egea (senior) and MacKenzie Hand (junior) motivate the team to keep trying while the coaches correct the mistakes and show the players that they are talented enough to have a winning season.

May will be a great month for the WHS softball team. It will be the last month of softball in Watertown for seniors Egea, Dana Hammerle, Kayla Lawlor, and Erin Hickey — although Egea plans on going on to continue her softball career at Curry College next year.

With the season halfway over, there is still time to make this the best season the team has had. Come to Hosmer Field for a home game and support the Watertown High softball team!