RAIDERS GO ABOVE AND BEYOND! 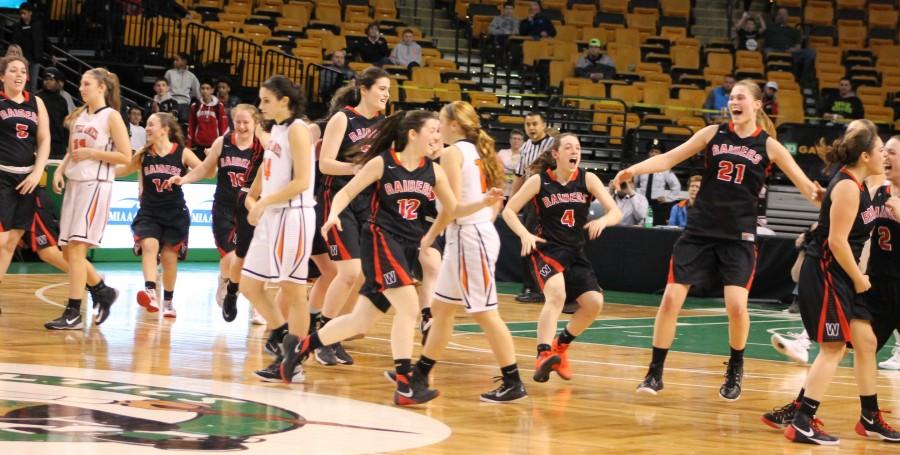 Four straight trips to the North finals. Back-to-back trips to TD Garden. Finally, an EMass title to call their own.

With just 32 minutes of basketball remaining, this could very well be their year.

One year removed from a loss in the same state semifinal, the Watertown High girls’ basketball team returned to the parquet floor Tuesday on a mission. The Raiders rode a 16-1 fourth quarter to roll over Oliver Ames, 48-34, and take home the Division 2 EMass championship.

With the win, the Raiders punched their tickets to the state championship game in Springfield on Saturday.

“It’s absolutely amazing,” said senior Michaela Antonellis. “We’ve all been playing together since Biddy Basketball and it’s all coming together, and there aren’t words to describe this feeling right now. Especially with the last three years going to [the North finals], losing, losing, then winning and losing here last year. Now, winning here, it’s unbelievable.”

Junior center Shannon Murphy turned in one of the biggest performances of her high school career on the biggest stage, scoring 20 points, grabbing 9 rebounds, and blocking 8 shots.

“It’s unbelievable,” said Murphy. “We’ve worked so hard for this. We put in hours of practice, scouting, the coaches have done an unbelievable job getting us prepared, and we pulled it together. Just the fact that our all of our hard work is paying off, it’s an unbelievable feeling.”

Oliver Ames (21-4) led going into the final quarter, 33-32. But the Raiders played their finest eight minutes of the season when it mattered most, locking down the defensive end while executing offensively, outscoring the Tigers, 16-1, in the final frame.

“That was the key to the game,” said Watertown coach Pat Ferdinand. “We played both sides of the floor very well.” 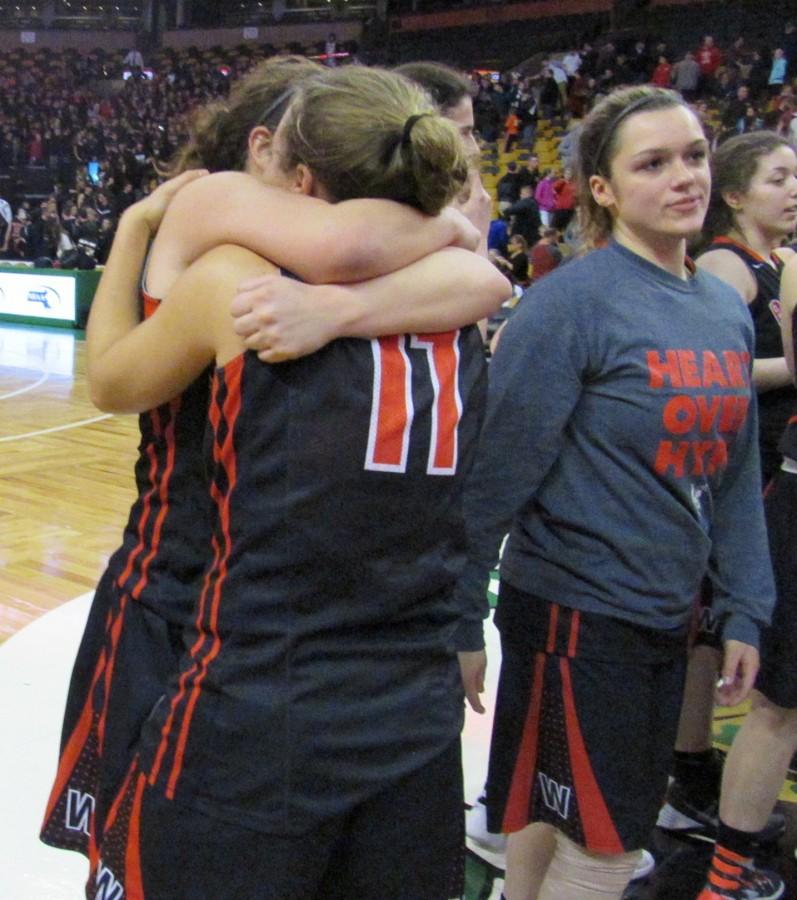 The Raiders got off to another rocky start, trailing at the end of the first quarter, 8-7.

Watertown was dealt a major blow when senior guard Nicole Lanzo went down with a knee injury just minutes into the game.

Junior guard Hanna McMahon, who had come off the bench all season, was forced to take on a much bigger role than usual, finding herself on the floor for almost the entire game.

“I thought Hanna McMahon did a great job when Nicole got hurt,” said Ferdinand. “I think we’ve been kind of preparing her all year for this moment, and she was able to step up and take it.”

After a tough first quarter, the Raiders got the offense rolling in the second quarter, and went on a 14-6 run to take a 21-14 lead into halftime.

Murphy’s stat line at the half was already impressive, as the Watertown junior had 10 points, 6 rebounds, and 4 blocks at intermission.

The Raiders weren’t taking anything for granted. A year ago, they went into halftime up 5 against Duxbury before that encounter went south quickly.

But in similar circumstances, inside the same four walls, Ferdinand had no thoughts of the Duxbury Dragons.

“None,” said Ferdinand. “I didn’t even think about it. I just knew that the biggest thing was that we needed to rebound, and, regardless, we knew they were going to make a run.

“But we had to stay level, and there were some possessions that we kind of wasted, but for the most part were able to get back at the end of [the third quarter] and make it close, by efficiently executing.” 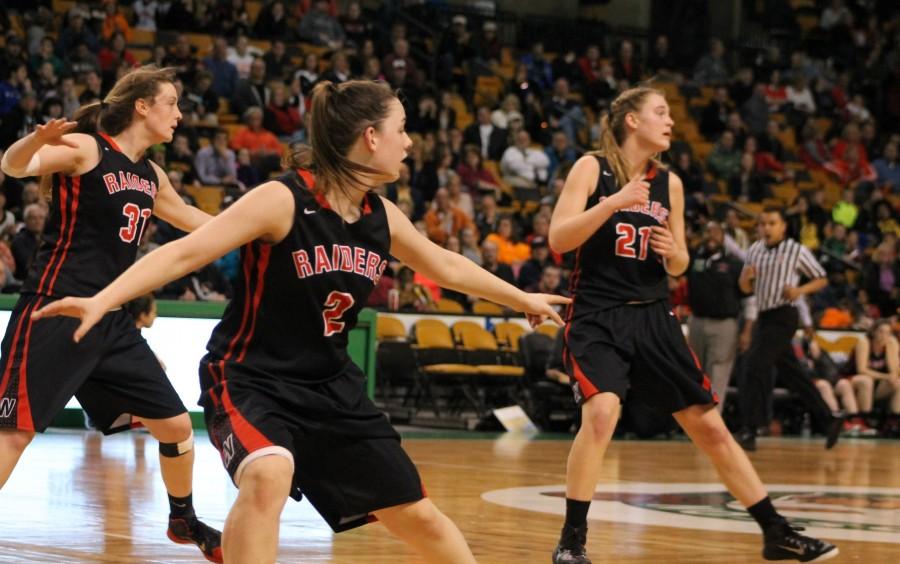 The Tigers came out swinging. Led by some strong post play by sophomore center Kayla Raymond, Oliver Ames erased the 7-point deficit. With 1:47 to go in the third, junior Francesca Calabraro drilled a 3-pointer to give Oliver Ames the lead, 31-30.

After a Murphy layup in the third, the Raiders found themselves down, 33-32, going into the fourth.

And with the game on the line, and the season in the balance, the Raiders were absolutely dominant.

“We just know that this is our year to win a state championship,” said Korte, who finished with 11 points and six rebounds. “And we know we have what it takes and we were just ready.” 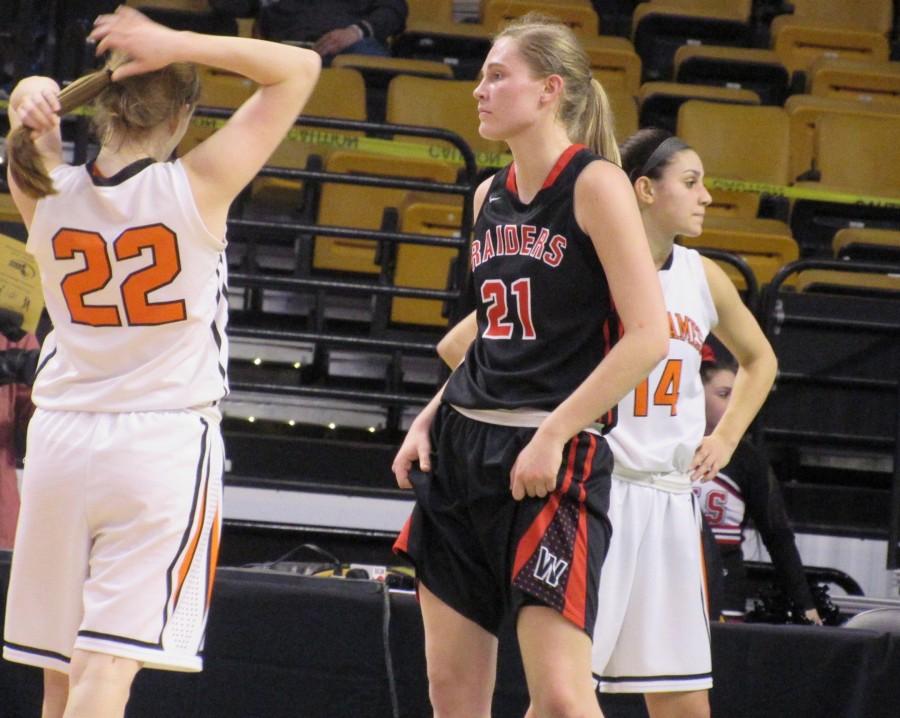 With five minutes to go, Murphy had an all-around sequence for the ages.

After Korte missed a three, Murphy skied for the rebound and laid it back in to put the Raiders up, 39-33. Murphy got back on defense, and swatted away one shot, and, after the inbounds pass, rejected a second to swing the momentum firmly Watertown’s way.

“It was just competitiveness,” Murphy said. “I wanted it so bad. Coming here last year, getting kicked out of the tournament by Duxbury, it was heartbreaking. We wanted it so bad tonight, and the fact that we got the opportunity to come back here, we just wanted it more than that than anything.

“It just hit me that we’re almost there and we just have this little stretch left, so I decided, I’ll just pick it up.”

The game was sealed at the free throw line. Antonellis went 4 for 4 from the charity stripe in the final minutes, putting her team up, 45-33, to just about wrap things up.

“I felt good. I felt calm,” Antonellis said. “I felt like they needed to be done to seal the game, so I just took a breath, fixed my form, and just hit them.” 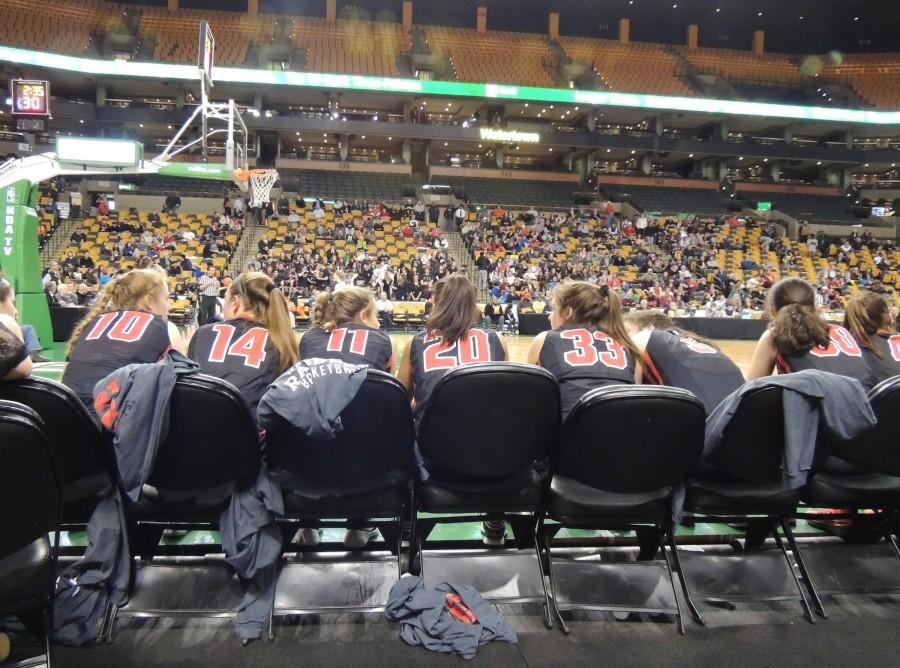 And on the very same floor that tears flowed and hearts were broken a year ago, it was Watertown’s turn to celebrate a 48-34 win and a trip to the birthplace of basketball for the Division 2 state championship game this Saturday.

“I feel great,” Korte said. “I felt like I was going to throw up the whole game, but I don’t even think it was nerves. I just thought we would win all game, and we just rallied. We came out in the second half and were just so ready to dominate.”

“I’m so excited,” Antonellis said. “We have to keep working hard. We can’t stop here. We want the title so bad. It’s going to be exciting.” 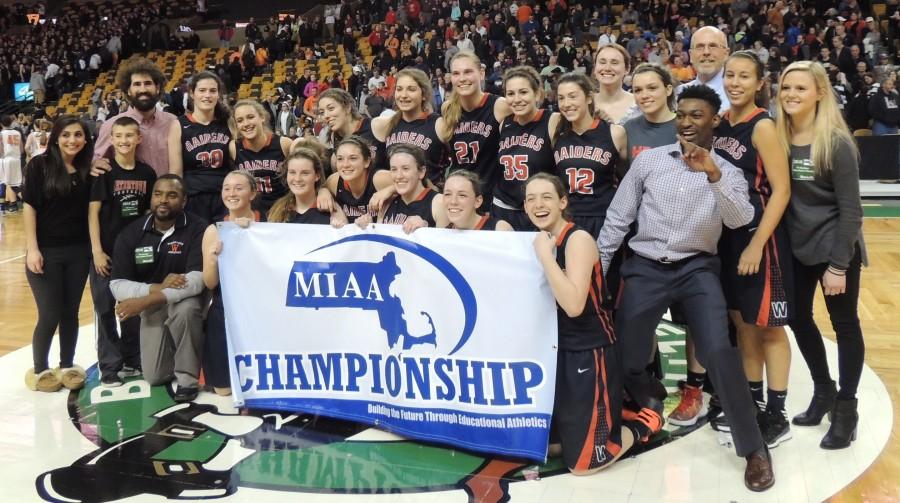