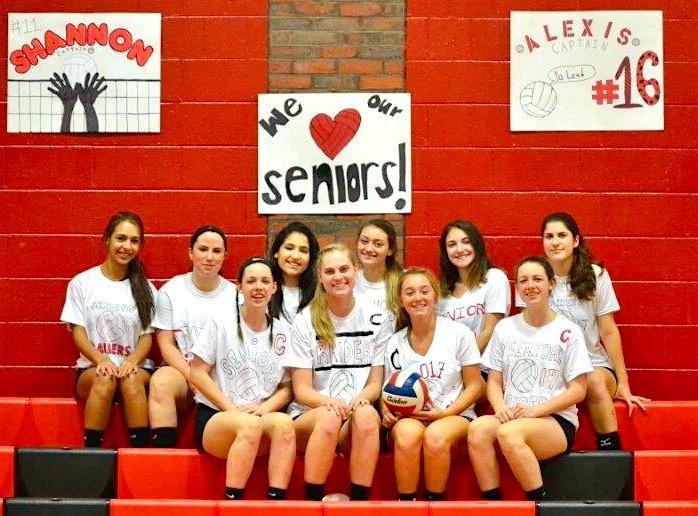 The seniors on the historic 2016 Watertown High School volleyball team, which went 10-9 and earned a spot in the MIAA Division 2 North tournament for the first time.

The Watertown High School volleyball team is the perfect example of the classic underdog. The varsity team is built on upperclassmen, mainly seniors, who have been playing together for a few years. They worked hard to build themselves up to where they stand today.

And in the process, they’ve made history.

The Raiders went 10-9 and, for the first time in the school’s history, made it into the MIAA state tournament.  Watertown is the No. 13 seed in Division 2 North. On Thursday, Nov. 3, the Raiders will  travel to fourth-seeded West Roxbury (17-2) for their first-round tournament match.

Toward the end of the season, they had to really fight for their spot in the tournament. Their Senior Night match against Wilmington, with a tournament spot on the line, was a close one. Wilmington was a tough opponent, getting ahead and winning the first two games. However, Watertown was able to win the next two to tie the match, then came back in the tiebreaking game after being down 12-6 to win.

The win on Senior Night kept tournament hopes alive, but winning the last home match was special on its own. As the last match of the season approached, it was clear that it game would either send the team home or send it to the tournament.

The match itself, against Wakefield, was exciting. The first game was a comfortable win for Watertown, but the Raiders lost momentum going into the second game. Wakefield was able to get the best of WHS, utilizing its tall front-row hitters. With the season on the line, the Watertown team banded together and worked hard to win the next two games. They kept up their energy and never quit.

Their determination and will to win have gotten them far. This team, coached by Mo Hamel and her sister, Mollie, have worked on their skills, which have definitely improved over the years. And those skills are really effective when paired with their perseverance.

“The general level of volleyball skills has increased, but our ability to stay scrappy and not quit is what keeps us alive,” said Mo Hamel. “ Aside from Shannon Murphy, we have an average height of about 5-6, and the girls work extra hard to make up for that!”

This year’s team has a recipe for success. The team has excellent coaching, solid players, and an unbeatable attitude. It is a mix that can bring them many places.

The Raiders have already made history just by making it into the tournament, and they plan to continue to compete at the highest level possible.

Christine Zhu is a veteran member of the Raider Times staff.