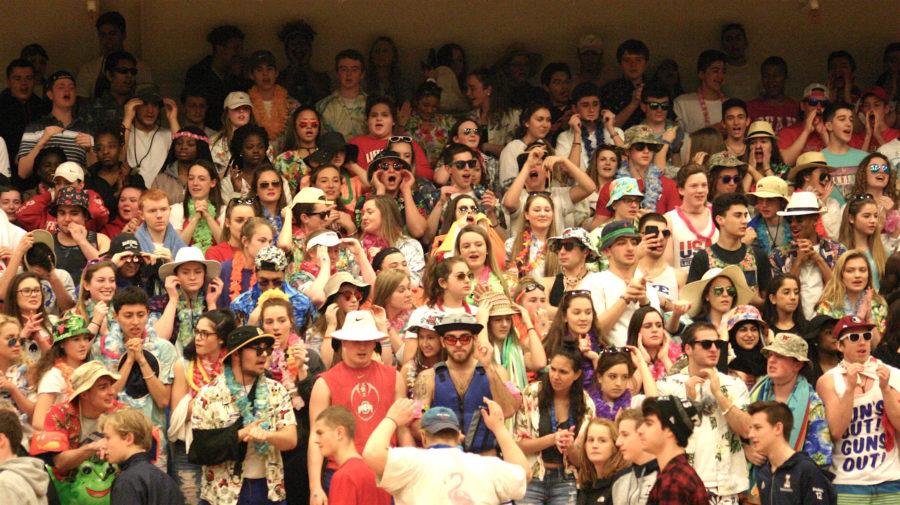 The Watertown boys’ basketball team won its eighth consecutive game Wednesday, March 8, with a hard-fought 58-46 win over Lynnfield at Wilmington High. Watertown fans were all dressed in beach clothes to show their team spirit and the crowd was going wild as the Raiders earned their spot in the Division 3 North final Saturday, March 11, 2017.

Watertown (20-2) will be competing against Bedford (17-6) at Burlington High School at 7 p.m. The winner will pay in the state semifinals Monday at TD Garden at 4  p.m.

“Overall our competitiveness and basketball IQ will reflect on how our team will play on Saturday,” said Jayden Hairston, a Raiders power forward.

Jayden said he expects a lot of physical play and good shooters from Bedford.

Fellow senior Jake Soares was excited for game — and the fan section.

“We expect a great outcome,” he said. “It will be fun to see one of our boys shoot the ball around Bedford. We need the players to be on their toes and ready to go. Huge game!

“[The game] will be USA-themed to show our American pride and our team spirits to help Raider Nation be hyped.”

WHS senior class president Zach Rimsa said, “It’s gonna be tough. These two teams match up well coaching wise and players wise. I expect good defensive play and for [Watertown] to stick to the basics of basketball by shutting down Bedford’s key players.”

Coach Steve Harrington has put all his time to prepare this team for the greatest moments like these. Harrington’s successes over the past years with Watertown show his dedication to the program. He said he is confident his team will put up a fight against Bedford.

“I expect every single player to come out [Saturday] with enough rest and mentally prepared for anything,” the coach said. “Knowing their strengths and weaknesses, we should come out to play tomorrow confidently.”

So come out and support these two great schools compete for the North sectional title. This is a game you wouldn’t want to miss.

Jackson Da Silva is a member of the Raider Times staff.