Together, they are world-beaters 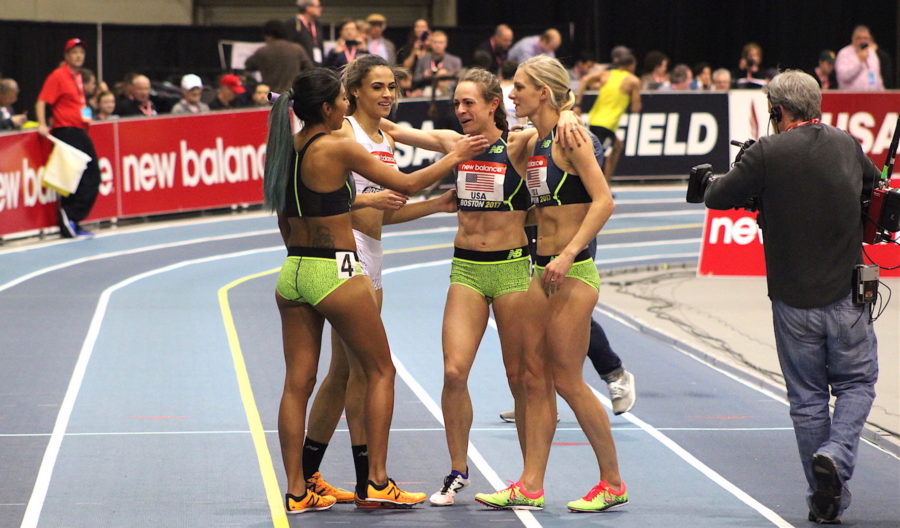 As Team USA’s Emma Coburn, Sydney McLaughlin, Brenda Martinez, and Jenny Simpson toed the line at Reggie Lewis Track and Field Center, they knew what was at stake.

The stars were aligned for each woman during the New Balance Indoor Grand Prix on Jan. 28, 2017. As a result, their distance medley relay team — consisting of Coburn in the 1,200 meters, Martinez in the 800, McLaughlin in the 400, and Simpson in the mile — set the world record with a time of 10 minutes 40.31 seconds.

Each woman standing alone carries a list of impressive collegiate and professional records and accomplishments, along with each woman traveling to Rio in August for the 2016 Olympics. Coburn won bronze in Rio in the 3,000-meter steeplechase with a time of 9:07.63, making history as the USA’s first female steeplechase medalist.

Coburn, a four-time US champion, found her confidence from Rio to push harder than ever for the world record, running a strong leg with a time of 3:18 to hand it off to McLaughlin.

“I’m the strongest I think I’ve ever been, in terms of strength and tempo and longs runs,” she said. “I just wanted to give [McLaughlin] the baton in the lead and knew that she’s one of the best runners in the world and she would get it done.”

Getting the job done is certainly what McLaughlin did. At just 17 years old, McLaughlin was the youngest US Olympian in more than 30 years, competing in the 400-meter hurdles this past summer.

As high school senior, running for a world record is ultimately another race in her indoor season. Between running among the best professionals in the world, to her own state meet later in the season, McLaughlin used this to her advantage. Running at the NBIGP was Simpson’s, Martinez’s, and Coburn’s first and only indoor race of the winter season, but was one of many races that McLaughlin had run in so far in 2017.

“I think it’s all apart of the process,” she said. “I get good races against the pros and this really helps me, especially in high school meets where I learn to push myself.”

With long seasons as a high school athlete, McLaughlin uses races with professionals to help focus on what is next. Just recently, McLaughlin set the national high school record in the 300 meters. After high school, she will be attending University of Kentucky in the fall of 2017.

The momentum from McLaughlin’s run accumulated for Martinez, who was able to pull away from the other teams, running a powerful 2:01.34. Running the 1,500 in Rio and being the first American woman to medal at the world championships in the 800 meters, the middle-distance star was determined to break the world record.

Although Martinez was disappointed in her race at Rio, her vow to bounce back and rise up certainly showed at NBIGP. Her efforts put Team USA in good position for the record as she handed the baton to Simpson with a 75-meter lead. Her strong finish was a show of her power among the middle distances, something that Simpson noted.

“That was one of the other things that was really fun about the relay,” Simpson said. “Brenda runs the 800 and that’s her specialty, and Syd runs the 400 and that’s her specialty, and me in the 1,600, and Emma’s  great among those distances. And so really everyone’s a specialist at what they did tonight, and I guess that’s what you have to have to set a world record.”

Simpson, a three-time Olympian and the first American woman to medal in the 1,500 at the Olympics, emphasized the importance of this race compared with the many others she has run in her lifetime. After breaking the tape and bringing her and her teammates to a world-record victory, the talented anchor leg explained.

“This [the race] stands differently on its own because it was done with a team,” she said. “I was thinking today about our effort to go after world record … In my career, I have received some shiny medals to keep on a nightstand at home and some collegiate records, but I think it’s so fitting and beautiful that the only way I could go after a world record was with a team, and that’s really special. And I hope that it’s this shining demonstration and collaboration among women on a team.

“I’m fiercely competitive, and so are the other women on Team New Balance, and yet we still have a genuine bond and friendship, and I think that’s really special and unique.”

Taking a few victory laps while the crowd roared in excitement, the four incredible athletes were unexplainably grateful after capturing the DMR world record. Undoubtedly, this race was one to remember for the four female runners.