Applause from the quarterback

Nick McDermott enjoying everything about this Watertown High football team, from the players to the coaches to the fans 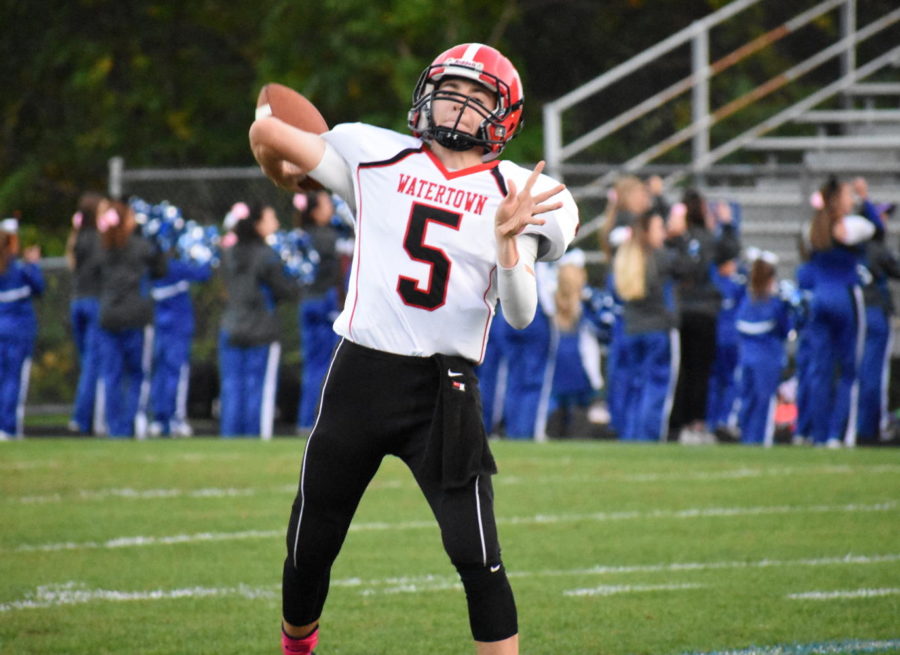 Junior quarterback Nick McDermott warms up before Watertown’s game at Stoneham on Oct. 13, 2017.

Nick McDermott is a great kid, great friend, and most importantly a great quarterback.

Nick has been playing football for six years and he still loves it to this very day. Nick has just started playing varsity for Watertown High this year as a quarterback. He feels the team has done a great job and he is loving the season so far.

Nick doesn’t just love the game he also loves his teammates and his coaches. When asked who his favorite teammate is this year, he humbly replied, “Not one person on my team is my favorite. I love them all equally.”

He said the same thing when asked about his coaches. He explained how they help and support him and his teammates so much and appreciates all of them.

Another reason Nick likes football is because of the fans.

“It’s so awesome to see all the people come out to support me,” he said.

When asked if he gets tense or worked up before the game knowing tons of people will be watching him, he said, “At first, it’s nerve-racking, but after the first play I get into the game and don’t let it bother me.”

His favorite memory was the Belmont game his freshman year. The game down to the last drive and the Raiders scored on the last possession and stopped the Belmont offense to win the game. What made this win even more sweet was the fact that it was also his birthday!

Though he has had high points in his career, he has also had lows. When asked about his worst memory, it wasn’t a moment when he messed up or just wasn’t playing, it was the game between Watertown and Triton in the North finals in 2016. Sadly, Watertown ended up falling short of a close game and it was disheartening. He said it was one of his worst football memories, just because of how disappointed he was since they had worked so hard to get to that point.

Nick is a three-sport athlete, who also basketball and baseball. When asked his favorite of those three and why, he said that although he enjoys the other two, he really loves football.

“I love taking the field with teammates on a Friday night,” he said.

When asked about his favorite aspect about it, he said, “I like playing with my friends and playing in front of all the fans at the games.”

Nick has always had the drive to play football because of his father. His dad played in high school and college and Nick always looked up to him for that.

When the future was mentioned to Nick, he was quick to respond with a mature answer. When asked about what he thought about the team will be like next year when he is a senior, he said he wasn’t too sure but wanted to keep his focus on the here and now and not worry about what might happen down the line.