Watertown shows its heart in 31-27 upset of Swampscott 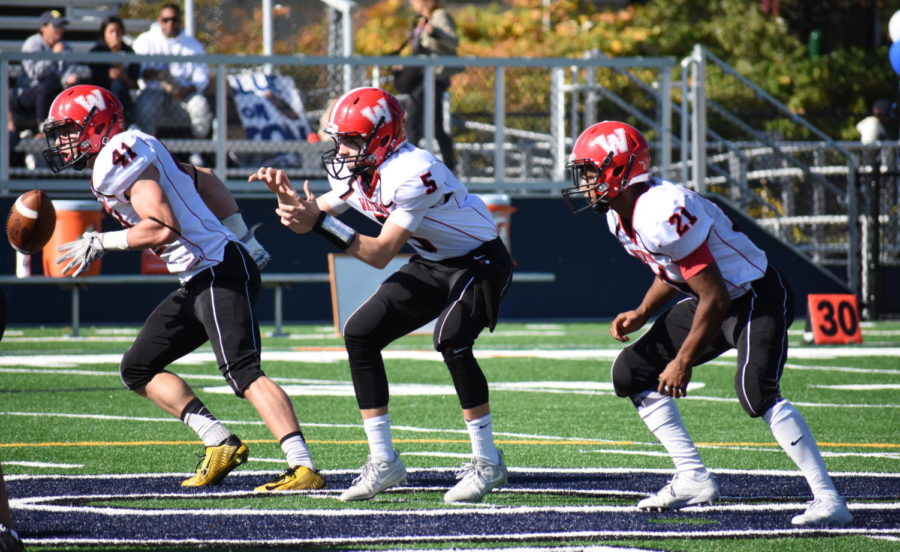 They had the smaller team, the poorer record, and were without the home-field advantage. They were counted out as the underdogs.

Despite all the noise, the Watertown Raiders came out victorious, 31-27, in the first round of the MIAA Division 5 North football playoffs against third-seeded Swampscott on Saturday, Oct. 28.

The No. 6 Raiders (4-4) advance to the semifinals on Friday night, Nov. 3, against second-seeded Somerville at Dilboy Stadium.

In an action-packed game that came down to the wire, the Raiders stayed calm and disciplined to pull off the upset, bouncing back from the three straight losses that concluded the regular season. Head coach John Cacace thought the team deserved a lot of credit for its toughness.

“It came down to the end. I just absolutely love my guys … to battle like that and make plays at the end,” he said. “It’s just a great effort.”

The Swampscott Big Blue had the chance to win the game with 50 seconds remaining, but the Raider defense held on and forced a turnover on downs. Senior John Korte knocked the ball away from a Swampscott receiver on a pass attempt in the end zone to seal the victory.

Senior quarterback Colin Frary from Swampscott finished the day with 355 yards and four touchdown passes, tearing up the Raider defense in the first half. Watertown managed to find an answer in the second half, holding Frary to just one touchdown and also forcing an interception.

“We had to change some coverages and some personnel,” Cacace said. “Those adjustments are what football is all about. I think we really did a good job and stepped it up defensively in the second half.”

“The coaches had many different types of coverages to shut down their quarterback, and we started to execute in the second half,” he said.

After jumping out to a 7-0 lead in the first quarter, Watertown found themselves down, 21-7, with a few minutes remaining in the first half. However, the Raiders quickly managed to put together a solid drive capped by a touchdown run by Muldrew. The defense then forced a fumble with 19 seconds remaining in the half, giving senior Conor Kennelly the opportunity to kick a field goal to make the score 21-17. Kennelly drilled the 32-yarder, and was also a perfect 3 for 3 on extra points for the day.

Heading into the locker room at the half, there was a marked change in the attitudes of the Watertown players. McDermott said that “the momentum after the field goal helped a lot, because it showed that we could actually play with these guys, and they weren’t any better than us.”

Watertown senior captain Ben Landry added that during the scoring drive before the field goal “we realized we could move these guys, and after this, we were able to play much better in the second half,” he said.

Indeed, the Raiders took the momentum from that last-second drive and immediately carried it over to the third quarter. The defense came to life and forced a three and out for the high-flying Swampscott offense. On the ensuing drive, Muldrew scored on 39-yard touchdown run to give the Raiders the lead for the first time since the opening quarter.

Swampscott would take the lead once more on a touchdown at the end of the third quarter, but wouldn’t score again after having the extra point blocked.

Watertown went 3-4 in the regular season in the very competitive Middlesex League, which is filled with much larger schools. Landry said this win proved that Watertown can compete in this year’s playoffs.

“It shows that even though we didn’t have a great [regular-season] record coming into the game, we are actually a pretty good team.”

Cacace agreed, saying: “We’ve come up short against some real good teams in the Middlesex League. I love this tournament [the MIAA playoffs]. We play teams our size, and we just battle.”

Cacace added “I’m really proud … I love the guys who battled today. It was just tremendous heart. I’ve talked about these guys having heart before, and they do. Like every Watertown team before them, this team’s got great heart.”

The game plan for next week awaits. The tough matchup versus Somerville in the North semifinals will test the Raiders’ heart once more.