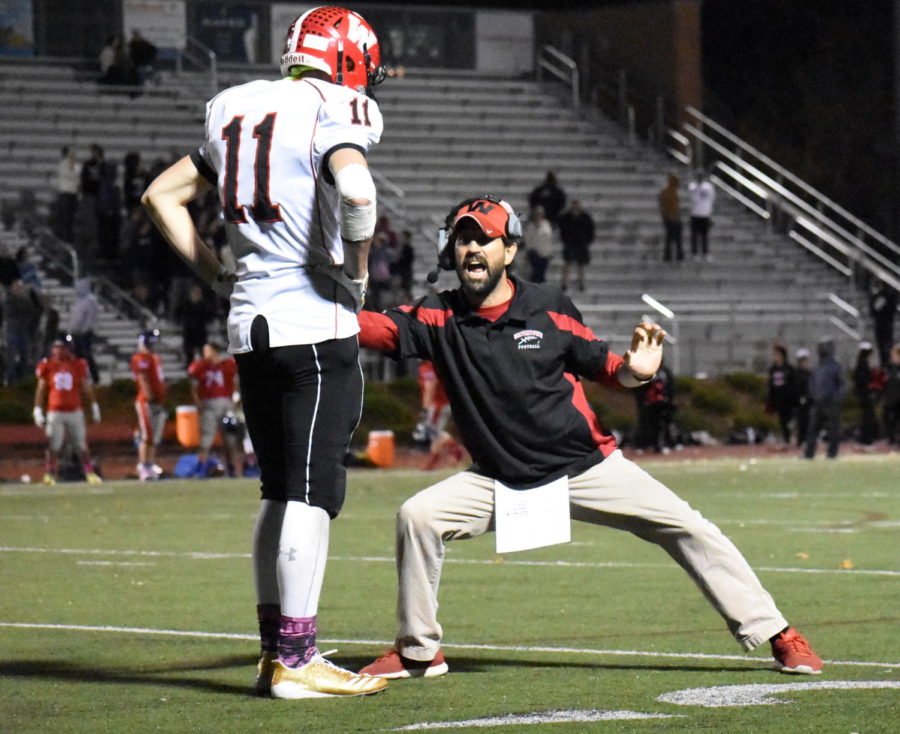 The No. 6 Raiders took down the No. 2 Somerville Highlanders, 21-20, on Friday night at Dilboy Stadium in Somerville. Watertown (5-4) advances to the finals of the MIAA Division 5 North playoffs against top-seeded Lynfield (8-1) next week.

In the most exhilarating game of the season by far, Watertown found itself down by 6 points with a little over two minutes remaining in the game. However, the Raiders stayed focused and composed to put together a strong 80-yard drive, capped by a miraculous 32-yard touchdown pass from junior quarterback Nick McDermott to senior wide receiver Conor Kennelly.

McDermott was forced out of the pocket under pressure, but he delivered a perfect chest-high strike to Kennelly, who turned around a few yards short of the end zone to catch the ball and then stepped into the end zone.

Kennelly then drilled the extra point with 12 seconds remaining to give the Raiders the lead over the Highlanders (6-3) for good.

“I knew when [Somerville] went down and scored it was going to come down to our drive,” said McDermott. “I was confident in the team and myself. I knew that we had it within us to go down and score. The whole team came together and showed the world what Watertown football is all about.”

“We execute, we stay calm, and we try to find the advantage,” said Watertown coach John Cacace of the final sequence. “It was just a really well-executed drive.”

The night was expected to be a high-scoring battle between two talented offenses. Instead, fans were treated to a dramatic, low-scoring game filled with incredibly tense defensive stands and strategic offensive drives.

The Watertown fan section started to grow as the game went on, and by the fourth quarter, the stands at Dilboy Stadium were as loud as they had been all night. The Raider faithful braved the windy conditions and were rewarded with a last-second victory.

Somerville won the toss and elected to kick off, which was surprising considering that Watertown often jumps out to early leads. Sure enough, Camara broke it open early with a 52-yard touchdown run less than two minutes into the game. Kennelly converted the extra point and the Raiders found themselves on top 7-0 on the road.

The WHS defense came up with a huge three and out on the initial Somerville drive, forcing the Highlanders to punt. When they got back on the offensive side of the ball, the Raiders quickly made it a two-score game, with senior Matthew Muldrew punching in a 1-yard touchdown run. Things were going well early for the Raiders, and there was hope on the sidelines and in the stands that Watertown could pull off an upset once again.

Somerville was not going to be counted out that easily. The Highlanders’ offense roared back to life at the end of the first quarter, as they capped off a solid 80-yard drive with a touchdown run to make it 14-7.

The Raiders had a few more offensive possessions in the first half, but couldn’t tack on any more points. Eventually, McDermott was picked off by speedy senior Jiovanny Pierre of Somerville, who returned it for a touchdown. The Highlanders had clawed their way back with the help of their defense to tie the game late in the first half at 14.

Heading into the second half, Somerville’s offense clearly had the momentum. However, the Watertown defense buckled down and held them in check, coming up with some key stops deep inside their own territory.

Watertown’s offense couldn’t get anything going either, as their only scoring attempt was a 47-yard field goal try by Kennelly. A rare miss by the senior kept the score tied at 14, and it remained so with about five minutes to go in the game. Just like last week’s comeback victory against Swampscott, the outcome of the contest would come down to the final moments.

Suddenly, Somerville found their old offensive firepower and began to march deep into WHS territory. With 2:15 to go in the game, Highlanders senior quarterback Elijah Jeffreys ran the ball in for a touchdown. Fortunately for Watertown, Somerville senior missed the extra point, so the score stayed at 20-14.

The Raiders were given one last drive, and one final chance for victory.

Cacace said that when the extra point was missed by Somerville, he told his Raiders that “if we score a touchdown here, we’re gonna win the ballgame.”

His prediction would turn out to be correct.

This win sends the Raiders to the Division 5 north finals for the third consecutive year. Cacace and the Raiders hope that the third time will be the charm against No. 1-seeded Lynnfield.

“I’ll take our chances, whatever they are,” said Cacace. “I know our team’s gonna go out there and fight. Win or lose, we know we’re gonna come down and have a chance in the end.”