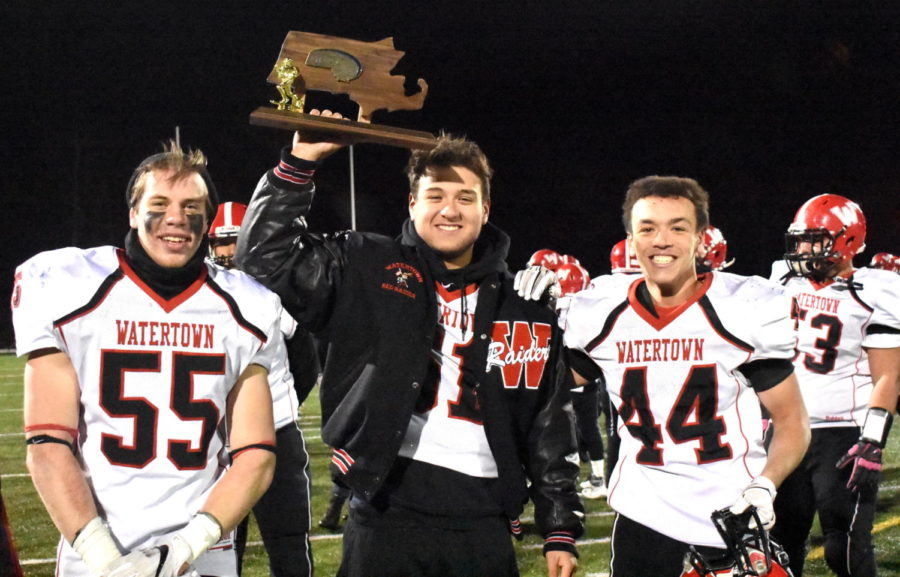 There was something special in the air on Friday night in Lynnfield — and it wasn’t the 12-degree wind chill.

Down by 10 points with less than three minutes remaining, the sixth-seeded Watertown Raiders came away with a stunning upset victory against the top-seeded Lynnfield Pioneers, 38-34, to win the 2017 MIAA Division 5 North championship.

The Raiders (6-4) advance to the Division 5 state semifinals next Friday against the undefeated South champions, Dennis-Yarmouth (10-0).

Watertown, under the leadership of junior quarterback Nick McDermott (four total TDs), scored two touchdowns in the final 1:15 of the fourth quarter to fell the top-seeded Pioneers (8-2).

Down 34-24 with 1:15 remaining, senior John Korte caught a 5-yard touchdown pass from McDermott to make the score 34-30. After senior Conor Kennelly converted the PAT to make it 34-31, he and Korte pulled off a perfect onside kick to retake possession at midfield. Korte was left uncovered and corralled the popped-up football easily in his arms before being downed by the Pioneers.

“We practice that onside kick every week, and every week it looks just like that,” said Raiders coach John Cacace. “It was perfect.”

On the ensuing drive, McDermott finished it himself on a game-winning 6-yard touchdown run with 11 seconds left in the game. Kennelly added the extra point to make the score 38-34.

“I knew that it’d be really hard,” McDermott admitted about the prospects of the miraculous comeback. “But I thought of what we did the last two weeks where we fought back against Swampscott and Somerville, and I knew that we had it in us to pull out the win.”

“It gets crazier and crazier every week,” added senior captain Ben Landry.

“We’ve had some good games this year,” said Cacace. “But this may have been the best of all time.”

Although the Raiders jumped out to a 17-7 lead in the first half, Lynnfield’s speedy offense clawed its way back and took the lead 28-17 with five minutes remaining in the third quarter.

The Raiders had many possessions in the second half that started off with great field position, but they weren’t able to capitalize. With six minutes remaining in the game and the score 28-24 in favor of Lynnfield, Kennelly missed a 48-yard field goal attempt. On the next Lynnfield drive, Murphy ran in a 29-yard touchdown that put the Pioneers up by 10 points with 2:50 remaining.

It seemed like a sure victory for the Pioneers, and the WHS fans began to quiet down. However, they had forgotten that all season Watertown has never given up on any game and wasn’t about to start now.

“I told the kids what I tell them every game and every year: ‘Never give up until the final whistle,’ ” said Cacace. “We come to play every game. I don’t care what anyone else says. Nothing else matters besides the 28 guys we have here on the sidelines.

“Tonight was an outstanding accomplishment for this team,” said senior John Korte. “This was all out of pure heart, passion, and grit.”

This will be a night not easily forgotten by the players or by the fans. The loyal supporters in the crowd braved the elements and freezing temperatures to support their team, and they were not disappointed. When Watertown roared back with two quick touchdowns to finish the game, the visitor’s side of the stands was trembling with excitement and shaking with noise.

The Raider faithful didn’t leave until the clock hit zero, knowing that anything can happen until the final whistle. They were rewarded by a victory and the promise of this incredible season continuing.