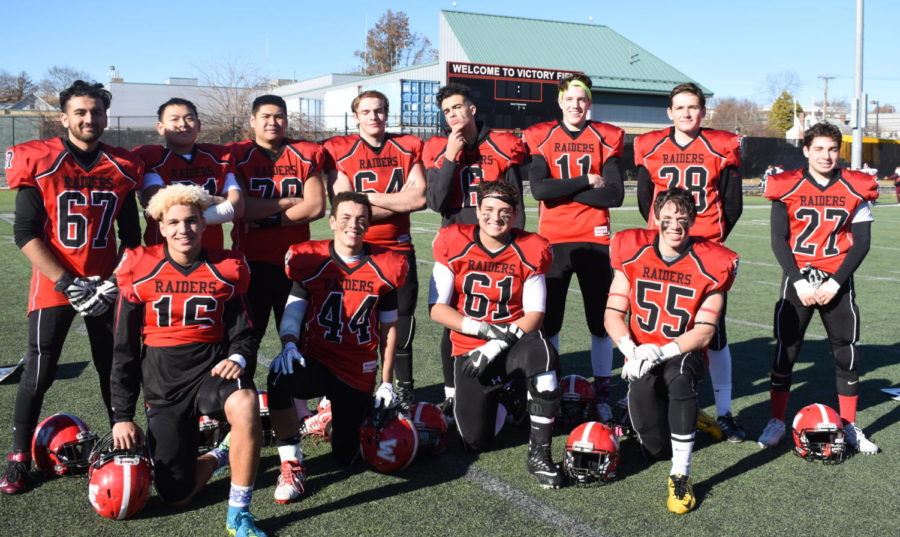 There is no better way to close out your high school career than with a win against your historic rival.

The Watertown Raiders did just that, finishing their successful 2017 season with a strong victory over the Belmont Marauders, 35-16, in the 97th installment of the Thanksgiving rivalry game at Victory Field in Watertown. For the outgoing seniors, this final contest capped their careers in the most satisfying way possible.

“It means everything, especially after [a playoff loss last weekend],” said senior captain Jake Matton, who was injured in the playoffs, but returned in the final two games of the season. “Going out with a win, I couldn’t imagine it any other way.”

Added fellow senior captain Matt Muldrew, “It means so much to me to beat Belmont. I’ve been waiting for years to be in this position [as a senior], and I’m just happy we won.”

Muldrew rushed for two touchdowns in the final game of his high school football career.

The win gave the Raiders (7-5) their ninth straight winning season, and it was their sixth straight win over Belmont in the annual game. Watertown won the Division 5 North championship this year for the first time in school history before falling in the state semifinals to undefeated Dennis-Yarmouth.

The Raiders had the game under their control from start to finish with a total effort on all sides of the ball. The defense came up strong, constantly pressuring Marauders quarterback George Fitzgerald while also stifling their running backs. The defense held Belmont to one touchdown until halfway through the fourth quarter.

“You don’t always get what you deserve in life, but you get what you earn,” said Watertown head coach John Cacace. “These guys have worked so hard this year and they played really hard today. I’m proud of these guys who got the experience of a lifetime this season. It’s just the way we wanted to finish things off.”

Junior quarterback Nick McDermott completed 10 passes for 223 yards and three touchdowns for the Raiders. Senior John Korte caught eight of those passes for 204 yards and three touchdowns. The highlight on the day came late in the first half when the duo connected for a 55-yard score over the middle, Korte shaking off two defenders before running into the end zone to put the Raiders up, 14-0.

“It’s very easy to find him on the field,” McDermott said of the special bond between him and his towering 6-foot-4-inch receiver. “Whenever I was in trouble, I could rely on him for the whole season. We’re gonna miss him next year.”

The Raiders never let up off the gas, pushing the score to 35-13 late in the fourth quarter on yet another touchdown pass to Korte. Belmont kept driving until the end, eventually converting a field goal to cut the WHS margin to 35-16.

The last play of the game was a special one. Korte, a receiver, took the final snap of his career under center, dropped back, and took a knee to run out the clock. As the players congratulated each other on the sidelines, the Watertown fans roared, and were given yet another reason to be thankful on the chilly November day.