The seventh-seeded Raiders blow out Essex Tech; await winner of Wednesday's game between Lynnfield and Swampscott 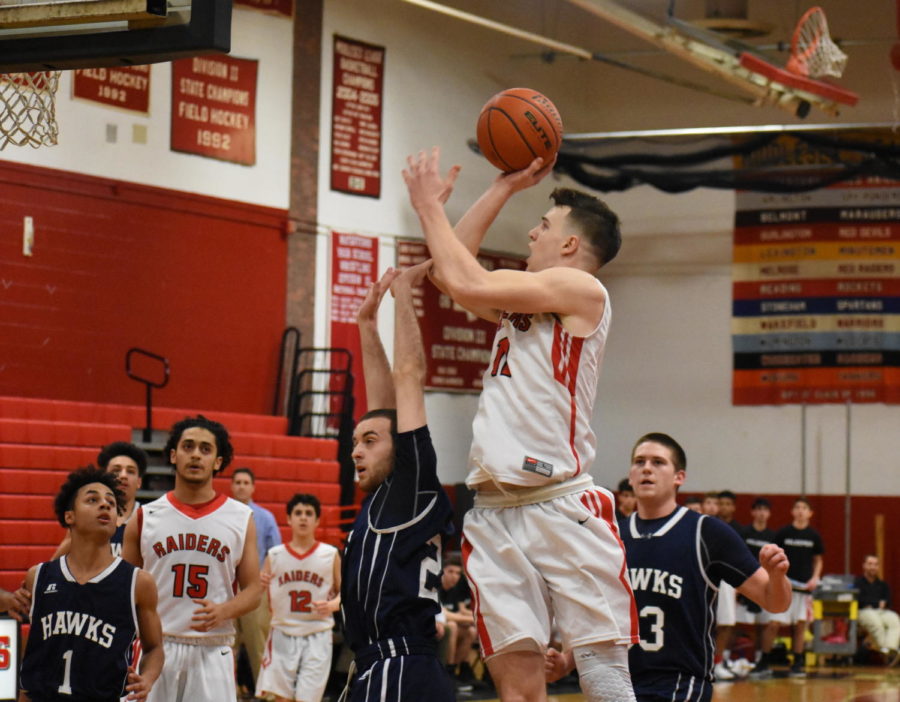 The Watertown Raiders are back in the playoffs, and they made sure everyone heard about it.

Coming out onto the court in warm-up jerseys reading “#SLEEPER” — representing their low seeding in the tournament this year — the Raiders looked like anything but a quiet team as they routed the Essex Tech Hawks, 77-32, on Tuesday night in Kelly Gymnasium in the first game of the Division 3 North playoffs.

According to senior captain John Korte, this victory sent a message to the other teams in the tournament: Watch out.

“We think we are the best team in the Division 3 North,” he said. “I feel like people outside of Watertown don’t really believe in us and think that we can go far, especially since we are the seventh seed, but we’re gonna come out and bring everything we have.”

Last year, the Raiders went all the way to the TD Garden, bringing home the Division 3 North championship. They are looking to repeat the feat again this year, and hopefully advance past the Division 3 state semifinals, where their season ended last year against Hanover. Watertown (15-6) also secured the Middlesex League championship for the second year in a row.

Korte, the Middlesex League MVP for back-to-back years, has been averaging 21 points and 11 rebounds per game during the regular season. On Tuesday, he racked up 18 points and eight rebounds in the victory.

Senior Wenston Rodriguez was the high scorer for the No. 7 seeds, pouring in 19 points to go along with seven rebounds.

“It’s the playoffs now, so I’m just trying to bring my game to the next level,” the guard said after the game.

Steve Harrington, the Watertown head coach, added about Rodriguez: “He really has been playing well for a bunch of games lately. Hopefully that continues for us.”

Senior Jose Tavares was the only real offensive presence for 10th-seeded Essex Tech, scoring 12 of their 32 points. The Raiders played lockdown defense, and their aggressive trapping and ball pressure made it impossible for the Hawks to gain any momentum.

Korte said the team was expecting a hard-fought game, but was pleasantly surprised when they jumped out to a 18-0 lead in the first quarter.

“We knew if we limited their 3-point attempts, we would be able to win this game. And I don’t think we let up any made 3-pointers in the first half,” he said.

At the half, the score was 51-14 in favor of the Raiders, with the Watertown starters having rested for the majority of the second quarter. They were briefly checked back into the game for the start of the third quarter, but soon Harrington let the second team run the offense.

Watertown will next play Saturday, most likely against Lynnfield (17-3), the second-seeded team in the North. To advance, Lynnfield must first beat 15th-seeded Swampscott (3-17) on Wednesday night, but they are the heavy favorites.

“That’ll be a very tough test,” said Harrington of a possible Lynnfield game.

“We played them in the semifinals last year,” Korte said of Lynnfield. “They are another tough team in this tournament, but if we come out and play like we did today, I think we can find some more success.

Korte has only one thought on his mind now that it is playoff season.

“Obviously the goal is for a state championship,” he said, “and I think [our team] is built to win it.”

If teams haven’t been paying attention to Watertown before, they certainly will be now after Tuesday night’s performance. And the Raiders will be waiting, ready to defend their title.