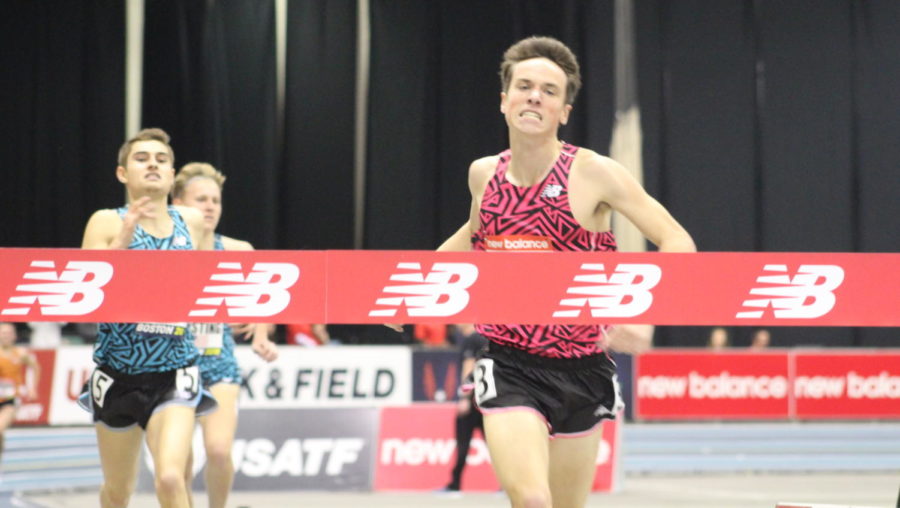 Gallery|10 Photos
Raider Times photo / Beth Powderly
Dalton Hengst heads for the tape to win the Boys’ Junior Mile, one of the events for younger runners during the 2018 New Balance Indoor Grand Prix at Reggie Lewis Center in Boston on Feb. 10, 2018.

The New Balance Indoor Grand Prix was full of many record-setting runs by collegiate and professional runners alike. But before the cameras turned on, the Reggie Lewis Track and Field Center turned its spotlight to another type of runner: the youth.

Hours before the professional races began Feb. 10, 2018,, middle and high school runners were given an opportunity to compete at a level of the highest caliber. Some as young as 12 were seen racing in the coed 4×200 meter relays, where Waltham Track Club’s winning time of 1 minute 49.79 seconds certainly set the bar for the rest of the day.

As the high schoolers made their way onto the track, it was the girls’ sprint medley relay that thrilled the audience. Milton edged out Andover and Woburn with a time of 4:09.68, fast enough to qualify for New Balance Nationals in March. Just as the girls crossed the line, the boys’ sprint medley relay took center stage. Newton North took the win with a time of 3:33.36 followed closely by East Orange and Belmont.

As the relays wrapped up, the crowd at the Reggie looked to a small group of high school sprinters in the infield. Pennsylvania had a strong showing in junior 60-meter dash, as natives Kristian Marche (6.85) and Thelma Davies (7.38) each took the respective wins in the event. For each sprinter, the event was a opportunity to run fast in an event not typically offered at high school meets. Marche and Davies were very aware of this and when the opportunity arose, they definitely took it.

The highly anticipated boys’ and girls’ junior miles rounded out the youth events, and they certainly did not disappoint. In the girls event, Kelsey Chmiel and Gabrielle Wilkinson battled for the top spot from start to finish, with Chimel winning in a time of 4:44.84 and Wilkinson following in a close 4:46.95. In a surprising turn, defending champion Josh Hoey did not start the boys’ junior mile, and Dalton Hengst won the event with a time of 4:10.57.

It can become easy to forget that these talented runners are just in high school. Unlike some of their older competitors, many of these high schoolers  are set to compete in the following weeks in their league and state meets. Certainly, as the sun set in Roxbury, the future of track and field certainly looks promising.