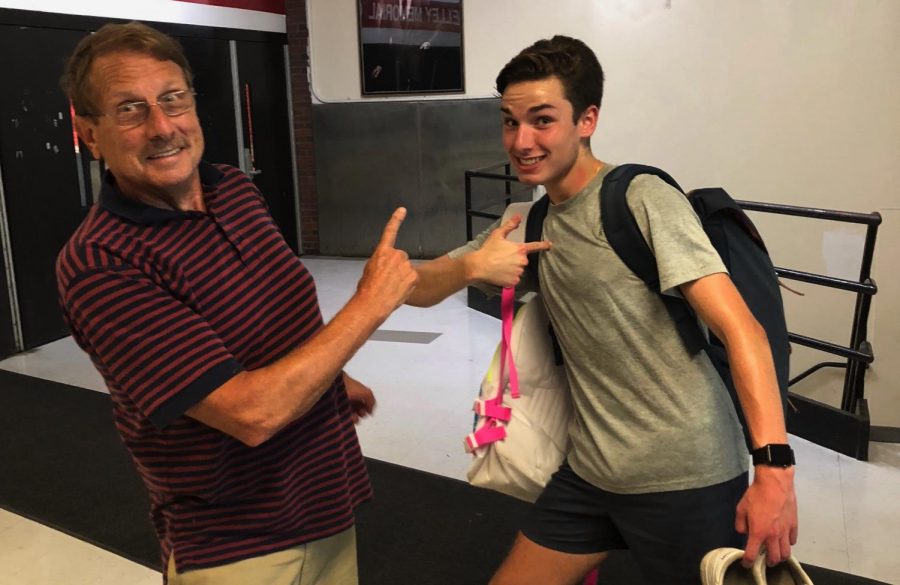 Watertown High coach WHS coach Thomas Wittenhagen (left) is counting on senior Jack Barry to be one of the Raiders’ best runners this season.

The warm-up — doing stretching, dynamic exercises, and speed drills — is a critical part of every runner’s preparation before a workout or a race. Many athletes are very particular about getting completely stretched out to avoid injury and can take hours before their run to get ready.

As the rest of the Watertown High School cross-country team slowly finishes their warm-ups, one team member is always standing there with his arms crossed, impatiently waiting to begin the day’s work.

Meet senior Jack Barry, whose need for speed developed from his passion for the sport of cross-country and his desire to hold his own against the region’s top distance runners.

“I’ve never been a patient person,” said Barry. “Being high energy while I prepare definitely puts me in a better mind-set come race day.”

Whether it’s blazing through his warm-ups in order to start a workout or encouraging the rest of the team to the finish line during a dual meet, Barry has found his calling in cross-country. Despite only beginning the sport in his junior year, Barry has quickly vaulted into the No. 1 finisher’s position for the Raiders.

“I did gymnastics for 11 years and rowing for two years before joining the outdoor track team my sophomore year, and the cross-country team as a junior,” he said. “It was most definitely the best decision I’ve ever made for myself.”

“Jack Barry is a very hard-working and dedicated athlete,” said WHS coach Thomas Wittenhagen. “He’s very motivational as far as his attitude, and he’s very positive and a good leader for our team.”

In just one full year of running, Barry has established himself as one of the premier long-distance runners in the Middlesex League and at the state divisional level. He runs a 17:39 5K, a 4:40 mile, and a 10:23 2-mile, which placed him 10th at the Massachusetts Division 5 Indoor Track Championships in February.

Barry wants to improve upon these high marks in the upcoming season.

“My individual goals for this year of running will be to go to All-States and to be a Middlesex League All-Star,” Barry said.

Despite his individual prowess, Barry still strongly values the team aspect of cross-country. Whether it’s the small, close-knit team, or the pre-race pasta dinners each week, he appreciates this part of the sport particularly.

“The community among the team is definitely what I find so enjoyable about it,” Barry said.

Wittenhagen spoke to what Barry contributes to this sense of community.

“He’s a wonderful athlete as far as cheering on and helping other runners in their workouts.”

This fall, the already-small boys’ team has gotten dangerously smaller with only six students on this year’s roster. The Raiders lost two prominent graduated seniors — Gus Brouillard, who now runs at Gettysburg College, and Kian Rice, who attends Tulane University.

Barry now begins this year in an unfamiliar situation — in a position of leadership as a senior himself.

“Not having the seniors here has been very strange so far,” he said. “Because I always looked to them for advice and discipline when it came to running, the fact that I’m the one people will be looking to for guidance this year is a scary but also very exciting idea.”

Being a senior will change nothing about his running, but Barry hopes to become an even better team member.

“Last year, in my first full year of running, I sort of did whatever I thought would be best for me,” he said. “This year, I definitely plan to be more of a team player and make decisions that will benefit the team.”

With Brouillard and Rice gone, there are two significant pairs of shoes to fill. However, Wittenhagen still believes the team can succeed this fall.

“Both teams are a little short on numbers, but I’m sure both teams will be competitive during the upcoming season,” he said. “Underclassmen have to step up and fill the void.”

The other runners on the WHS boys’ team are David Danielian, Nathan Follett, Paul Landry, Chris Gagnon, and Thomas Powderly.

“All the team members this year are a joy to coach,” said Wittenhagen. “They are all hard working and listen to coaching advice.”

On the girls’ side, the Raiders graduated two of the finest distance runners in Watertown history — Emily Koufos and Elizabeth Powderly.

Barry says he looks up to Koufos, who was also the one who convinced him to join the cross-country team last year.

“I’ve always drawn so much inspiration from her,” he said.

As both the team gears up for the long season, which begins Sept. 18 with a home meet against Woburn, Barry is eager to toe the line with some of Massachusetts’ elite runners, and thinks he can hold his own.

“You have to be willing to put yourself in positions that may not always be what you’re used to,” Barry said. “Only you can decide whether you cross the finish line in first or fifth place.”