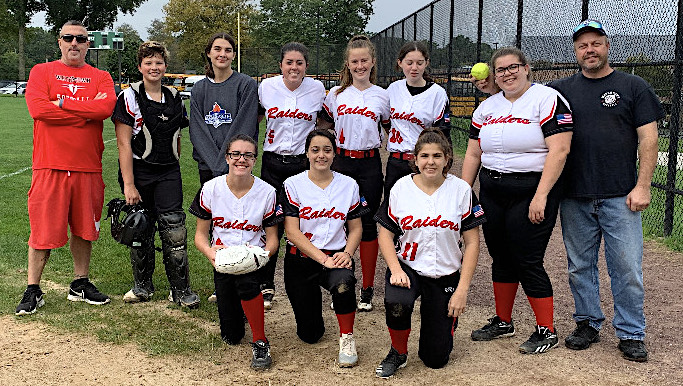 Players and coaches of the 18U Watertown Raiders softball team pose at their second game.

Being a part of the team may be hard, but it is a very rewarding experience for both the coaches and players.

Dive into the Watertown Raiders 18U team! Coaches and players on the team have a lot to say!

Amy Swenson, 18U catcher, has been playing softball since the age of 8.

“I wanted to join softball because it seemed fun,” Swenson said. “I started catching because I knew it had the most playing time and that was the most exciting to me.

“There’s a lot of action. I get to control the speed of the game as well. It also helps me make a good bond and trust with the pitcher. New friends!”

She likes the 18U Watertown Raiders team because the team has a great competitive and welcoming attitude.

“The hardest thing about catching would be blocking pitches and past balls,” she said.

On top of that, she said she practices blocking, passing the ball, framing home plate, and throwing down to second. She also practices with the pitcher.

“I plan on catching in the future,” she said. “I want to continue doing it in high school and hopefully I’ll get a scholarship for college.”

Bella Gamber, also wants to continue her softball career for high school and eventually get a scholarship.

“I think and hope I’ll be able to get a scholarship. I really like to play softball and pitch,” Bella said.

According to Bella, she started playing softball when she was 10 and started pitching about two years ago. After Bella’s mother asked her to sign up for the team, she agreed, thinking it would be a fun activity. Bella fell in love with the sport!

While Bella used to play shortstop, she finds herself more suited to pitching.

“I liked the fact that I can control the game,” she said. “I love being in control, going at my own speed.”

Bella doesn’t just like pitching. She also loves the team and the sport.

“I like making new friends, competing, and enjoying the team’s atmosphere,” she said.

The coach of the 18U Watertown Raiders, Jeremy Souza, couldn’t agree more with Bella.

“I love working with girls. Helping them mature, grow, and playing to their strengths is the best thing to see as a coach,” he said.

The girls on the softball team don’t just have hard things to do, the coaches do as well. Jeremy stated that getting the girls focused, making sure every player is doing their job, and competing to their best ability is the hardest part for him.

“Sometimes being a coach is hard. It depends on the game really, the situation,” he said. “I’ve been doing this for a long time now so it’s like second nature to me.”

Jeremy also explained how he feels that coaching is rewarding to him, saying, “Team building, achieving goals, championships, watching the girls have fun but also competing and the moments, friends, connections, that will last a lifetime!”

Jeremy had not initially considered becoming a coach, but, when he was asked him to volunteer, he stepped up.

“At my daughter’s softball game in 10U, I was asked to coach since the team was short on coaches. I was asked to help coach and I agreed,” he said. “After that, I instantly fell in love with it and kept going!”

Jeremy thinks he will stop coaching within a few years.

“Most of the girls, my core girls, will graduate high school, age out, and move on to college,” he said. “I remember I have worked with the same core girls for five-plus years now.”