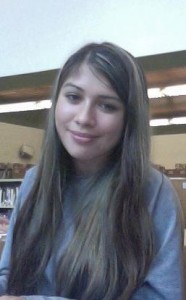 Nicole Mendez is a senior at Watertown High School.  She plays soccer and wants to go to (B.C.) Boston College or Emerson College to play soccer and major in Communications. She also did cheerleading in the past and is thinking about doing it again. She cheered at her old high school, Trinity Catholic, and went to cheer camp, UCA, Universal Cheer Academy, and won an award for standing out as a role model.

One day, she would love to be a magazine editor, columnist, or newscaster - she even has experience doing a cable show on Cambridge Cable.  If she went the print or online route of journalism, she wants to write about eye-catching fashion in a funny and helpful manner.  Also, she looks forward to one day travelling overseas and hopes to be a foreign correspondent as a way to learn about new cultures.  She really wants to go to London to pick up on the British rock music scene and its unique fashion.  Plus, she digs the accents (duh, who doesn’t?).

Nicole’s favorite magazine is Glamour.   She said, “I treat them [magazines] like my trophies.”  She has them stacked up on her desk.  Her favorite writer is “Jake”, an anonymous column writer for Glamour, who gives the guys’ perspective.

She loves music from Guns n’ Roses to Maroon 5 to One Direction and she even loves Luke Bryan.

She is really interested in television shows because of the cast bonding that occurs.  She thinks they are the best part of the show since the relationships between the actors is often so much funnier than the actual show. Her favorite shows are How I Met your Mother and The Big Bang Theory.

As a staff member of The Raider Times, Nicole will contribute as a feature writer.  Look for her fashion tips!