“Insurgent” strays from book, but scores with viewers 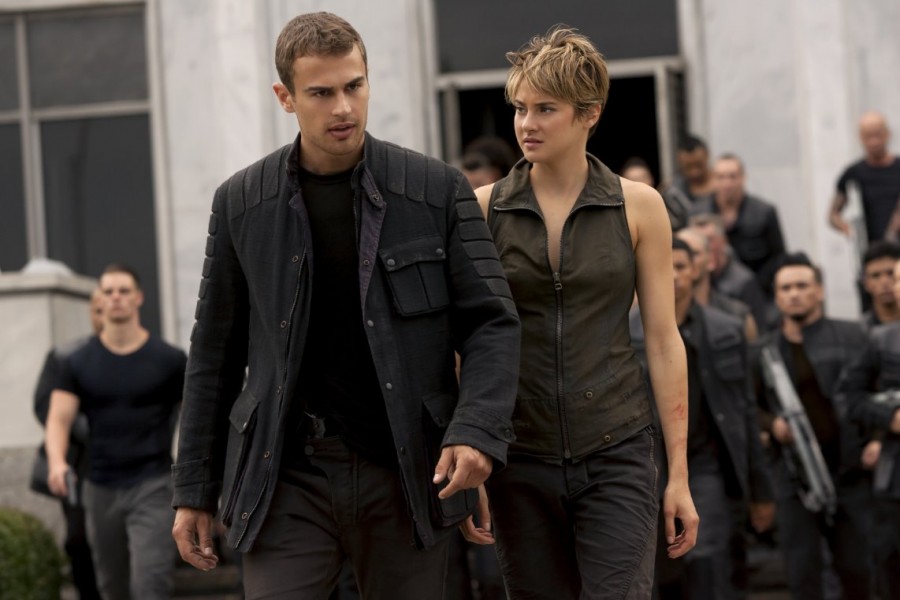 “Divergent” set high standards to live up to, but “Insurgent” exceeds expectations.

Kicking off where “Divergent” ended, “Insurgent” offers insight on the main characters’ changed lives. We see the world from the perspective of Tris Prior (played by Shailene Woodley), as well as if we were observing the world from the outside.

Throughout “Insurgent,” the many varied camera angles give a more lively effect to the movie. We, as the viewers, get to see the movie from all angles, not simply just from what one character sees. One moment, we get an up-close view of Tris’s face, then the next, we see her standing side by side with another character on a Erudite rooftop, the night sky enveloping the space around them.

The setting closely resembles what one might expect after reading the books. The movie was mainly set in the factions of Amity and Erudite, which were accurately set up, in terms of visual appeal as well as how the characters interacted.

“Insurgent” gives the sense of freedom and breaking free, which is the opposite of what a viewer would pick up from “Divergent,” which had more controlled and contained aspects.

The star of the books and movies is, of course, Tris. Woodley is very talented and plays the role seamlessly. Her acting is  exceptional and she never fails to portray the emotion her character is feeling. Not once does it seem as if Woodley is not giving the role her all. She is so dedicated to playing Tris that she wants to start doing her own stunts, claiming that since safety is a priority for the stunt doubles, she does not feel scared to get bumped or bruised. Due to insurance, she was unable to perform her own stunts in “Insurgent”, but nevertheless it shows her level of devotion.

Costar Theo James, who plays Four (also known as Tobias Eaton), does a fantastic job at putting on the tough guy look and attitude, but still manages to capture the sweetheart romantic part of the character that we are so familiar with from the books.

Peter Hayes, played by Miles Teller, is a crowd pleaser. A little bit two-faced, and a really humorous guy, Peter changes the atmosphere from serious and action-packed to funny and lighthearted. He has a more prominent role in the movie than in the book but no one seemed to mind, instead the audience will laugh at his witty comments.

One of the more disappointing casting choices was that of Naomi Watts, who plays Evelyn Johnson-Eaton, and looks too young to be the mother of Tobias. Instead of being mother and son, they look like they could be a couple.

Ansel Elgort, who plays the brother of Tris, Caleb Prior, did a good job of fulfilling the needs of the role, but his character was downplayed. He was not as important in the movie as he was made to seem in the novel. In his first appearances in the film, his character seemed to be portrayed as stupid, which is definitely not the Caleb Prior we got to know in the book.

While overall the movie was well-acted and well-directed, an “Insurgent” reader might be upset that the movie-makers did not follow the book as closely as they could have. For example, a main theme in the book is the fears of the characters (specifically Tris and Four), so much so that the characters are defined by them. In the movie, though, the fears did not dominated the theme — they barely even came up. It may seem like a big “Uh oh” to not have incorporated the fears too much, but the movie was never boring. Tris and Tobias seemed to be running into problems (like the ones they encounter in the book), so the movie kept flowing.

There were other minor imperfections, but they did not take away from the quality of the overall movie. Even with these slight letdowns, the movie was satisfying, action-packed, and full of love and humor.

This is a great movie for teens, especially those who like movies made from books. Romance does not overshadow the action of the movie, but it is not gory either. It has more shoot-em-up, fist-fight type of action. Half of a preview audience was made up of adults and even they got a good laugh out of Peter’s comedic persona.

“Insurgent” is a well-rounded movie, perfect for anyone who’s up to watching an engaging, jam-packed movie! So be sure to reserve your tickets to catch this eventful film!

Anya Gellerman is a member of the Raider Times staff.

Catherine Papayannopoulos is a veteran member of the Raider Times staff (2014-17).