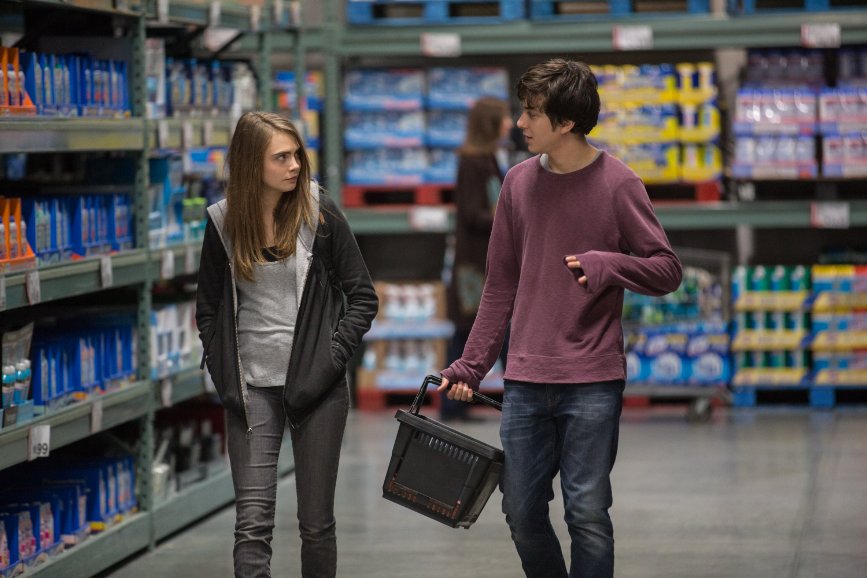 “Paper Towns” is a coming-of-age story based on the novel by the same name, written by John Green. If that sounds familiar, it’s because he also wrote “The Fault in Our Stars” — unfortunately this movie is the lesser of the two.

“Paper Towns” is about falling in love, growing apart, and growing up. All of this is told from the perspective of Quentin (Q for short) Jacobsen, played by Nat Wolff. After years of pining after his childhood love Margo, played Cara Delevingne, Q finally gets to reconnect with her during a wild night that involves breaking and entering, vandalism, and dancing. The next morning Margo disappears without as much as a goodbye. Q, along with his two best friends, set out to find her and bring her home just in time for prom.

The film is one part love story, one part mystery, and one part buddy road trip. The part that is supposed to hook the audience and get us interested in the two main characters is the love story. Sadly, that is the weakest part of the movie. What I’m sure is supposed to be a guy falling in love with a mysterious complicated girl comes off as a very careless manipulating girl luring a boy who, despite his implied intelligence loses all good decision-making skills. I came from the movie thinking they were the characters I understood the least, which is very bad since they are the main characters.

That’s not to say that the acting or the characters were bad. For example, I found myself laughing and really enjoying Q when he was with his two best friends, Ben and Radar, who were played brilliantly by Austin Abrams and Justice Smith, respectively. Whether discussing imaginary girlfriends, black Santa, or what happens after high school, Q was the most believable and sympathetic when he was with his best friends.

This wonderful trio was enhanced by the addition of Lacey, Margo’s former best friend, and Angela, who is Radar’s very mature and funny girlfriend. The addition of these two during the road trip section of the movie temporarily turned the movie from teenage love story into a wonderful comedy ensemble of endearing and enjoyable characters. Regrettably, that doesn’t last long and we’re soon back again into the less authentic love story.

When the supporting characters are more entertaining than the main ones, the movie has failed on some basic level. More so, the message the film is trying to convey about enjoying the present instead of planning for the future isn’t properly handled by the plot. But the movie does have its moments of genuine fear, love, and hilarity. Also there is a surprise cameo by a familiar face that I won’t spoil here.

Because of the flatness of Q and the ridiculousness of Margo, this is not a good love story. Instead, it is a wonderful story about young relationships, both romantic and platonic. I give “Paper Towns” a C-, but I still recommend this film to teenagers 14 and up.

This is still an enjoyable movie that makes you realize (or remember) that friends are better than girls that break into your room at night and make you steal your Mom’s car.