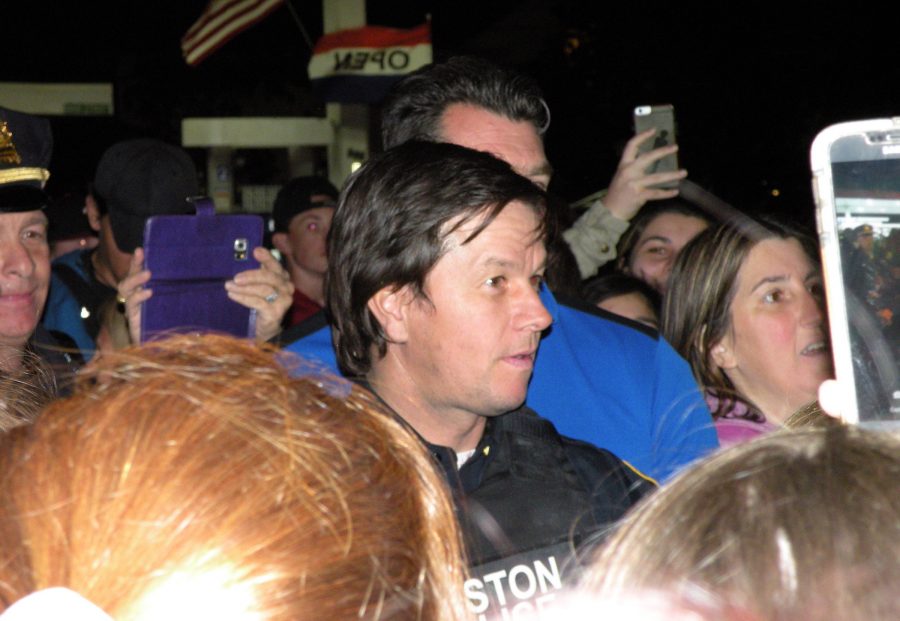 The evening of May 9, 2016, was no average night for the citizens of Watertown, Mass.

Main Street Mobile, a gas station near the square, was the site for the filming of a scene for “Patriots Day,” a movie about the 2013 Boston Marathon bombing and manhunt that ultimately ended in Watertown. What made the night even more exciting — besides the fact that a Hollywood movie was being filmed right in the town — was that producer and star Mark Wahlberg was on set!

The scene was hard to miss Monday night. While the actual street wasn’t closed to vehicles, the entire sidewalk and section of Main Street with the gas station was off limits to the general public.

Set up beside Main Street Mobile were production tents, cameras, boxes of equipment, and probably more than 100 staff members who were putting it all together. As for the actual set, there were police vehicles with their lights shining brightly, cars ranging from the Watertown Police Department to the Massachusetts State Police.

Across the street were masses of Watertown residents, all trying to get a glimpse of the action at the gas station. A production assistant, Delane Leahy, was watching over all the people and making sure that onlookers didn’t block the road. While doing her best to keep the people safe, she was also able to give the inside scoop on the scene, without giving away any spoilers.

She said that the crew had filmed earlier in Cambridge at a rehabilitation center, and also at Fenway Park. Leahy said that the decision to end the day’s shooting in Watertown was made by the location team for the movie.

When asked if Walhberg had any control over where they were filming, she replied, “No, he didn’t have any influence on picking this specific place.”

As for the reason why they chose Main Street Mobile? “It’s similar to the actual station where the event occurred,” Leahy replied.

And with that quick interview, she was back to her job safeguarding the people.

But not everyone in the crowd was only an onlooker. Nicole Mendez, a Watertown High School Class of 2013 graduate, had been an extra in “Patriots Day” earlier in the filming and shared her perspective as a participant.

“I actually play a victim in the movie who gets hurt after the second bomb,” she said. “I didn’t know they were doing this part in Watertown until someone in my family told me.”

Nicole finished her portion of the film early on, and she actually got to meet Wahlberg on set during her scene.

“I literally ran right into him,” she admitted.

Nicole said Wahlberg was very nice about the incident, and that he has a friendly energy and attitude in general. Mendez also mentioned that Wahlberg empowers everyone on set, and leaves them feeling motivated after every scene.

She recalled him saying, “ ‘Patriots Day’ is not just some movie about a bombing. We’re going to show the world what ‘Boston Strong’ means.”

While the process has been personally rewarding, Nicole said she had an additional reason to want to be in the film.

“I felt that someone from Watertown had to be in the movie, even if it was just a small role. I want to make Watertown proud,” she said with a smile.

After the casual conversation, Nicole blended back into crowd of citizens who were unaware of her participation in the film.

Through the night, the cast and crew filmed in chilly 50-degree conditions, while pedestrians stayed to watch, hoping that eventually the star would come to greet them.

Finally, around 10:30 p.m., the crowd’s prayers were answered and the one and only “Marky Mark” himself came across the street to meet the Watertown residents.

“Thank you all for coming out tonight and supporting us,” Wahlberg said.

He was only able to stay for a few minutes, but, in that time, he did the best he could to talk with fans and shake hands. They were hands that some citizens half-jokingly swore they’d never wash again. Lucky WHS students Ally McCall and Syndey Poulin were even able to snap selfies with the man of the hour.

Finally around 11 p.m., the cast and crew of “Patriots Day” ended their long day of filming, and the members of the large crowd of bystanders slowly returned to their homes in a chilly-but-satisfied star-stricken state.

For those who were there, it’s a memory they’ll never forget. But don’t fret if you missed seeing Wahlberg in Watertown, there’ll be plenty more chances once the film is in theaters starting Dec. 2.

Hannah McCall is a member of the Raider Times staff.