“Finding Dory” is funnier — but not better — than “Nemo” 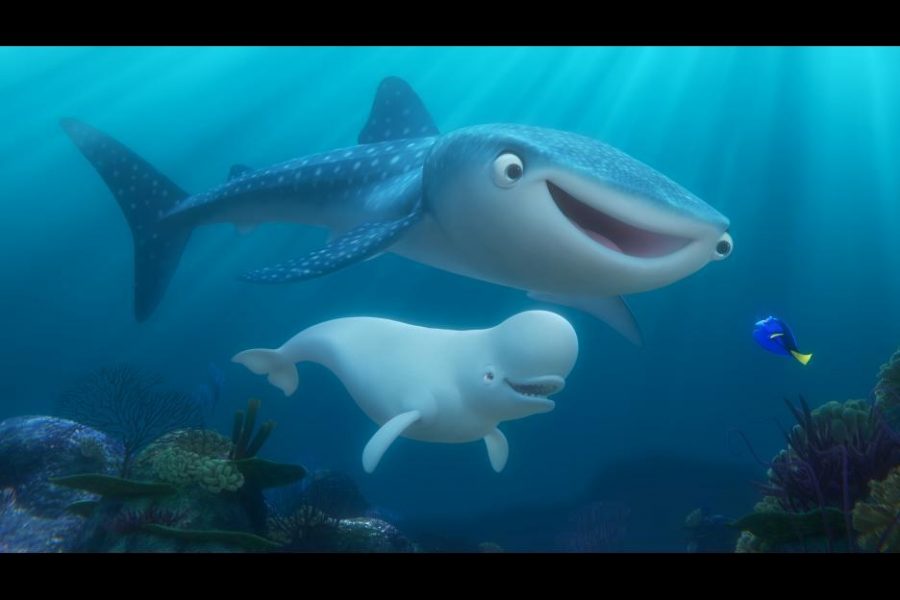 “Finding Dory” is the long-awaited sequel to the beloved modern classic, “Finding Nemo.” With such an expectation to live up to and Pixar’s more recent affinity for making terrible films — with exception being “Inside Out” — it is surprisingly a great film with minor flaws.

By saying this I am in no way trying to imply that this sequel surpasses its predecessor, rather it simply complements it. With “Finding Nemo” being such a cinemat masterpiece there is no way possible this film could surpass it.

As the title of this film blatantly states, this film is about Dory (Ellen DeGeneres) as Nemo is pushed to the side as a supporting character. Dory is on a quest (sparked by a jogged memory) to find her parents all the way in a marine life institute located in California after years of separation. On this journey we meet new characters such as Hank the octopus (Ed O’Neil), Whale’s Bailey (Ty Burrell) and Destiny (Kaitlin Olson), along with older, memorable ones.

This film has some of the best animation I have ever seen. It takes the wonder and beauty of the original and amplifies it beyond all belief. This is one thing that made me fall in love with the original, the fact that you felt like a fish in water. You could see every detail in every creature and the glistening of the water in every underwater scene.

The third act is off the wall with insanity, to the point in which it gets hard to believe that you are watching a sequel to “Finding Nemo” and not Looney Tunes. ”

This film is drastically funnier than the original. The humor of this film is spot on, from more mature nudges to the visual gags. I am not promising Monty Python, but you will not be disappointed. This is mainly in part to some great minor characters, such as the sea lions, Bailey, Destiny, and Becky the bird. They practically steal the show every time they appear on screen. This is a pretty decent departure from all of the gloom in the original.

The second and third acts of this film are spectacular, especially the third act. This is when we get some of the best visuals and jokes the film has to offer, as well as some truly heartfelt moments. The third act is off the wall with insanity, to the point in which it gets hard to believe that you are watching a sequel to “Finding Nemo” and not Looney Tunes. Which surprisingly works for this film for some reason.

However, the first act of this movie is emotionally manipulative and scary, but not for the reasons you would think. I find it scary because it is honestly a boring recreation of “Finding Nemo,” to a point in which I feared that the entire movie would just feel like a remake.

The emotional manipulation is too strong for its own good, I honestly almost cried within the first five minutes but didn’t because, even though it was sad, they chose the cutest voice that they could find to voice a younger version of Dory.

This film from beginning to end was missing something important. The magic and heart that encapsulated “Finding Nemo” and made it the amazing film we know and love it for. That something seems to be missing here. There was a sense of wonder and emotional depth to the original that  seems to be obviously missing in this sequel. The best example of this feeling can be captured in the opening scene in “Finding Nemo,” in which a barracuda eats Marlin’s wife and children and leaves him with the sole survivor, Nemo.

We feel so much for these characters and what Marlin has gone through in about four minute. But in “Finding Dory” we just get a little “Memento”-esque backstory that works, but not to the full effect that the original had.

The music score is tired and boring. Nothing is memorable and it sounds like the score to a direct-to-DVD rip-off of “Finding Nemo.” ”

A major gripe I have with this film might just be a personal one, but confining a film with such an amazing open world to what would technically be an aquarium truly irritated me. The first movie used the open world of the ocean and the beauty of the Great Barrier Reef to its advantage, so to completely throw this out for the “wonder” of confinement really puzzled me. Even all of the posters for “Finding Nemo” were truly dazzling, showing the depth and spectacle of the ocean.

Finally, one of the biggest problems I had was the score. As where the score for “Finding Nemo” was as emotionally compelling as it was beautiful, this new one sounds tired and boring. Nothing is memorable and it sounds like the score to a direct-to-DVD rip-off of “Finding Nemo.”

Now I have to admit, I might have some very biased opinions about this film due to my early childhood fanaticism with “Finding Nemo.” I vividly remember going to see it in the cinema and purchasing the toys, video game, and merchandise for it (all of which I still own to this day).

“Finding Nemo” was and still is my favorite animated film to date, while some Studio Ghibli productions come close.

This film complements “Finding Nemo.” It is not a must to see the original — Why haven’t you seen it yet though, seriously, it’s great — so you might be confused by some jokes or cameo appearances, but it is not a necessity in order to see this film.

This film is perfect for the entire family. Both a 4-year-old and a parent can watch “Finding Dory” and love it. The majority of the jokes are appropriate for the target age demographic of children, with a few more mature jokes flying over the heads of the little ones.

With all that I have said, I would not skip seeing this in a cinema. It may not be a masterpiece, but it is a beautiful and hilarious film with amazing characters.

And please stay for the very end for the continuation of the cliffhanger from the end of “Finding Nemo.” You know what I am talking about.