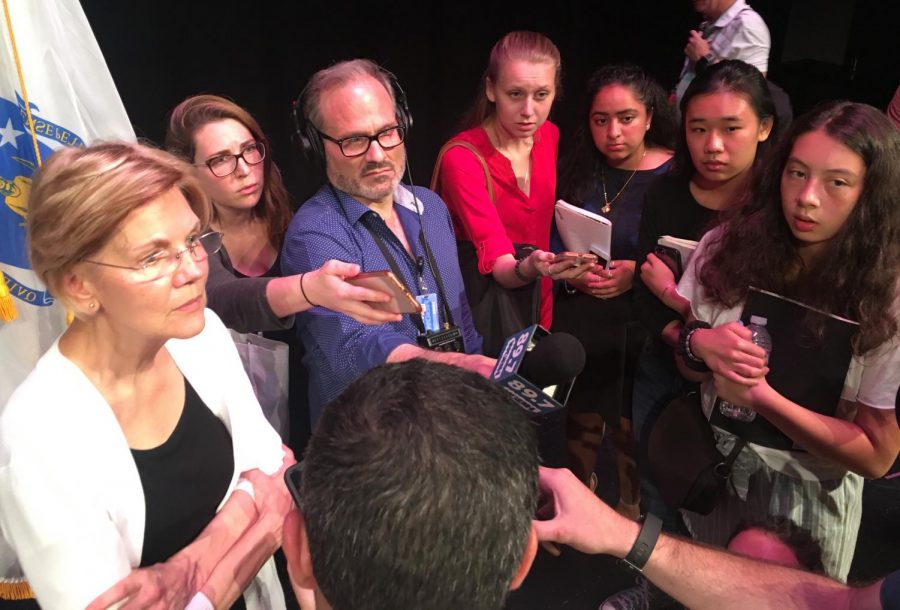 Senator Elizabeth Warren left is surrounded by reporters after a talk at Woburn High School on Aug. 8, 2018.

The murmurs from the crowd suddenly came to a stop as the first female United States Senator from Massachusetts, Elizabeth Warren, walked on stage to greet a massive audience of Massachusetts residents in the Woburn High School auditorium. Warren was hosting her 32nd town hall since becoming senator. The focus of this Aug. 8 meeting was on the audience, as the people would have the chance to directly ask their representative about the issues that were most prevalent to them.

Warren started the meeting discussing a little bit about her personal life and how it shaped her into the woman she is today. When she was young, her dad had a heart attack and, as a result, her life changed. She learned words such as mortgage and foreclosure, as her mother had to get a minimum wage job to save their family home. Warren initially thought this story reflected American spirit. However, she soon discovered that it was a story about government. Today, a minimum-wage job will not provide for a mother and a baby or a two-bedroom apartment. Warren questioned whether our government was one that works for the people, or a government that works for power.

What kind of a country says to a child, ‘You need a post-high school education, but good luck you’re on your own?’ ”

“Money shouts in Washington,” she emphasized.

Warren then discussed just how corrupt the people involved in government actually can be, saying they slosh a lot of money around and rig the rules. She also discussed how the rich try to get working people against working people, in an attempt to maintain power. She questioned if democracy even works anymore and thought we should have a new take on government as “government is our opportunity to build our futures.” Warren thinks that we, as a nation, should invest in our kids, college students, and workers.

On the topic of college, Warren discussed her own experience. In order to get where she is now, she first went to a commuter college that cost her only $50 a semester. She pointed out that this same opportunity is not available to many students now. Her suggestion is to put more money into our public colleges, universities, and technical schools.

“What kind of a country says to a child, ‘You need a post-high school education, but good luck you’re on your own?’ ” Warren questioned.

Warren also called attention to the fact that this is a burden that is hurting many young citizens.

“We are crushing an entire generation of young people,” she said.

In order to fix this situation, Warren said that one of her firsts bills would be to reduce the interest rate on student loans.

A resounding question that was continuously asked was Warren’s take on safety in schools and gun control. Her thoughts were that there should be some sensible changes in gun laws as students, teachers, and schools should be protected. On the topic of people of color being shot by members of the police force, Warren said her goal was to help regain trust for people of color with the police.

We are crushing an entire generation of young people.”

One question that the senator seemed to avoid was that of impeaching President Donald Trump. She didn’t give an answer as to whether she would like to see it happen or not, but instead said to let special counsel Robert Mueller finish his work. She said that she could not make a decision unless she heard what he was being impeached on exactly.

Following the town hall, people had the chance to go up to Warren, ask her questions, and take pictures with her.

Upon first meeting her, Warren seemed warm and friendly, pulling a group of student reporters into a hug. She was very easy to talk to and put time aside for the students and answered questions we may have had. Warren did not give off the vibe of a stuffy and serious politician, but instead a very approachable one.

After winning the Massachusetts Democratic primary, Senator Elizabeth Warren is now up for her re-election against Republican Geoff Diehl in November. No matter which candidate you support, head out and vote on Nov. 6!

Marissa Gorman is a member of the Raider Times staff.