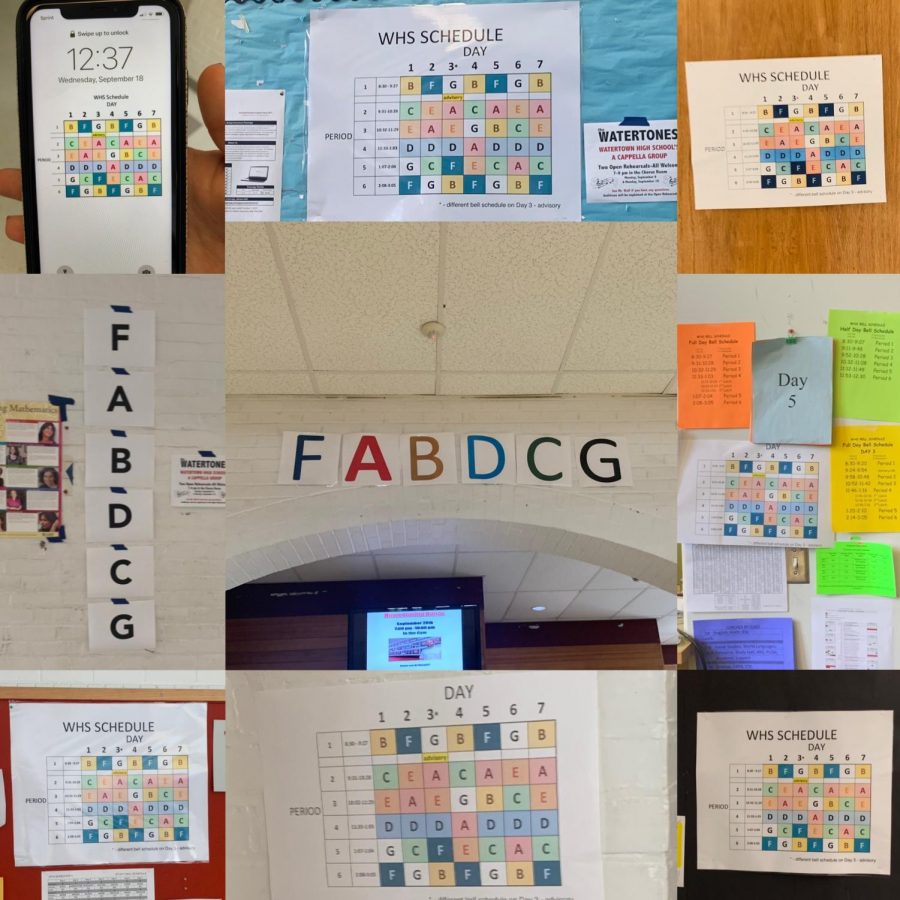 Watertown High School’s students and teachers have been needing a lot of help in learning the new seven-day rotating schedule.

These are the words of many Watertown High students and teachers this year.

This year, Watertown High School experienced a schedule change, from the old seven-day set schedule with one float block to a new seven-day rotating schedule with many classes changing meeting times throughout the week.

There are many opinions about the new schedule, some are positive and some are negative, it all depends on the person you ask.

The Raider Times student newspaper polled more than 150 WHS students and staff members, asking them to rate the new rotating class schedule from 1 (don’t enjoy) up to 10 (really enjoy).

One way the schedule can be a refreshing change was highlighted by guidance counselor Lindsy Orpen.

“Students experience different subjects throughout the day, so, if students are tired in the morning, they can try something like math in the afternoon and morning,” she said.

Keeping the schedule fresh is one of the many benefits of this new schedule. Many of the poll respondents said they liked having classes at different times.

“It is surprising and I don’t get bored,” said junior Caiden Kiani, who rated it a 10.

Sophomore Lara Cordiero gave the new schedule an 8, saying, “You don’t have a class the same time every day.”

With all of the questions surrounding the change, many students are comparing the new schedule with the previous one.

“There was nothing wrong with the old one. No need to change,” said Ramon Sara, a sophomore. “Everyone has to look at PowerSchool after every period because it’s not consistent.”

“Not that beneficial than last year’s,” said Janoah Thomas, junior

“Hard to learn, too much time to figure it out,” said Mili Ortiz, a senior.

Many of the freshmen are unhappy with the schedule as a whole — even though some of the issues are holdovers from the previous schedule.

WHAT ABOUT NEXT YEAR?

More than  75 Watertown High freshmen and sophomores were polled about what they want to see in the next class schedule. Here are their responses:

Do you prefer a five-, six-, or seven-day schedule?

“My lunch cuts my D block in half,” said ninth-grader Aren Cimenian.

Lwana Khalil, a ninth-grader said, “Seven days is too long.”

Many teachers also dislike aspects of the new schedule.

“It’s harder to track students down because they’re in a different spot every day,” said Ms. Orpen.

One whose viewpoint may differ from others at Watertown High School is principal Shirley Lundberg.

When asked where she would rank the new schedule on a scale from 1 to 10, she said a solid 9. She likes the rotating classes, saying it is better for focus and productivity. However, Ms. Lundberg acknowledged the schedule is confusing, adding, “[it’s] the only complaint I’ve heard so far.”

A new schedule was discussed for more than a year with teachers and staff.

When asked about certain details of the schedule and how it was put together, Ms. Lundberg said dean of students Brian Brewer had a major impact on the schedule.

Mr. Brewer said that he likes “seeing students at different times of the day.” But, he also says, it is “hard to remember the order.”

When building the new schedule, there was a lot of thought given to having some blocks during the week be longer, like 90 minutes.

Ms. Lundberg does think that the idea of having some long periods in the schedule should be revisited in the future.

In regards to the long\short class schedule idea, she said that teachers were concerned with how it would interfere with their curriculum. Adding to the complications of building a schedule are the WHS teachers who travel to classes in other schools during the day.

The WHS principal said that her schedule doesn’t differ much, as she still starts at 7 a.m. and ends in the evening.

The principal said that even if she wanted to change the schedule at this point, she doesn’t think that she could.

“It’s good to let things settle and see how it goes,” she said.

Gabriela Bondaryk is a member of the Raider Times staff.