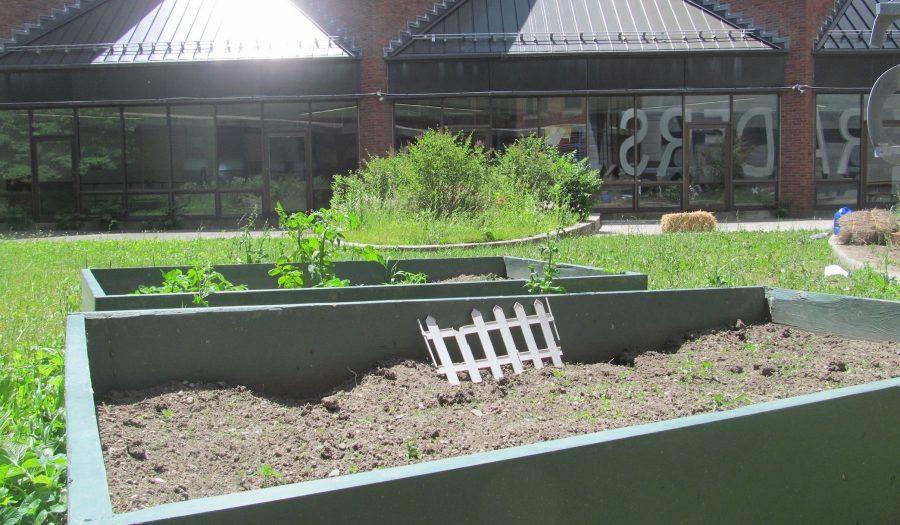 Gallery|9 Photos
The beds in Watertown High courtyards as they appeared in the spring.

“Both of the courtyards can be beautiful. They just need a vision,” says Shirley Lundberg, principal at Watertown High School.

Situated next to the cafeteria and the teacher’s lounge, respectively, the two courtyards can be found at WHS. In the late spring, as seen from the cafeteria doors, the larger courtyard is sunny and clean, a nice place, perhaps, to eat one’s lunch. Farther into the depths of the natural reserve, however, the flowers fade away. In a few cobbled areas, tulips and lilacs lie, but most of the yard is covered with weeds and sticks.

The smaller courtyard is far worse off. No flowers are visible, and weeds blanket the ground. An old bird feeder stands with peeling paint; no birds come, and none are fed.

In the spring, however, the district administration has pursued a new program for students of the district, one that may help rebuild our courtyards.

As part of a pilot program, garden coordinator Judy Fallows was introduced to the elementary schools; starting in March, she was able to take all three elementary school gardens through a full growing season. Now, partnering with Stephen Marshall, the manager of the district’s food programs, they have big ideas. They want to try to rejuvenate the status and operations of the courtyard, specifically the larger one. They also want  to start a WHS Club.

“I hope to work with a few WHS students, and I will run the club with Stephen’s help,” she says.

The club will start by testing the soil of the courtyard, using UMass Amherst’s agricultural services. The college will test the soil, officially clearing the club to grow vegetables in the year, which include cucumbers, squash, lettuce, and a variety of herbs. After that, the students who buy lunch will be able to eat some homegrown food! The food/gardening club will also raise a flower bed, and renovate and plant at least one raised bed. The club will also engage in a complete and general cleanup of that larger courtyard.

The courtyards haven’t been around since the beginning of Watertown High School, however. They were only conceived and developed when the cafeteria “bump,” was constructed.

Since they were built, the courtyards haven’t had many big changes. Until recently, the two courtyards were led and maintained by a master gardener: Nancy Dow, the occupational therapist of Watertown High School. She came into the school once a week to help a variety of students. She has since left for the Lowell School.

“I believe in the importance of functional activity and was looking for something to do with the students that would be meaningful and productive,” she says. “As a master gardener, I look at gardening as a functional skill, as well as a therapeutic activity.  I was hoping to help create a little haven for students as well as a place for them to try new skills and enjoy being outdoors in nature.”

The “haven” aspect of our courtyards, since she’s left, has somewhat fallen apart.

Dow was the architect of the garden as people now know it.

“Initially the courtyard was a neglected and a weedy mess,” she says. “I believe it was a science teacher years ago who had the vision for the courtyard and planted all the roses and perennial flowering bushes that are there.”

“We tried laying down cardboard to kill the weeds and make it easier to garden. The whole area under the cafeteria window was a mess,” she says. “It was not mowed and the weeds were everywhere.”

Dow worked through the problems. She partnered with a number of organizations, clubs, and other teachers, too, to rebuild the courtyard’s garden. She received a number of different grants and donations from local, state, and national companies and nonprofits, from Lowe’s to Watertown Landscaping.

“I shall forever be grateful to Mark Boudreau, who made the raised beds and covers,” says Dow. “Without his help, we wouldn’t have been able to proceed. I was new at the school but he made me feel welcome.”

Dow also thanked the administration, who was very supportive of the operations in general.

But when she left WHS, the garden fell back into disarray.

When Ms. Dow led the gardens, she also worked with the EDCO program in the summer of 2014. The EDCO programs, based in the Phillips School across the street from WHS, is a program for special education students that runs all the way up to age 22.

“It was heartening to hear how much kids said they liked the garden when we had cleaned up,” says Dow. “I would like a meditation space for those children who just need a little space and some quiet time.”

The courtyard would be more than a beautiful space to enjoy. It would be an educational benefit for students across all spectrums. Dow strongly believes in the numerous and positive effects of gardens and gardening.

“It would be great for it to be part of some curriculum and for classes to take advantage of it,” Dow says. “There are so many ways to access it such as through science, math, art, writing.”

The potential for the variety of courtyard projects is outstanding, from students, to teachers, to classes, to lunch. But the future is not here yet.

“These things are still very new… the budget is still not totally approved,” says Fallows.

So the WHS food/gardening club doesn’t exist — yet.

“There needs to be some structure so that the garden doesn’t fall into disarray again,” Fallows says. “I would like to get more students involved.”

Dow hopes for more, and we have two great leaders, both armed with a powerful vision for the courtyard. But to move forward with the courtyards, to beautify the space, for the students to grow their own, the need to act is now.

As Dow says, “ A Garden doesn’t just take care of itself.”

Jeremy Ornstein is a veteran member of the Raider Times staff.