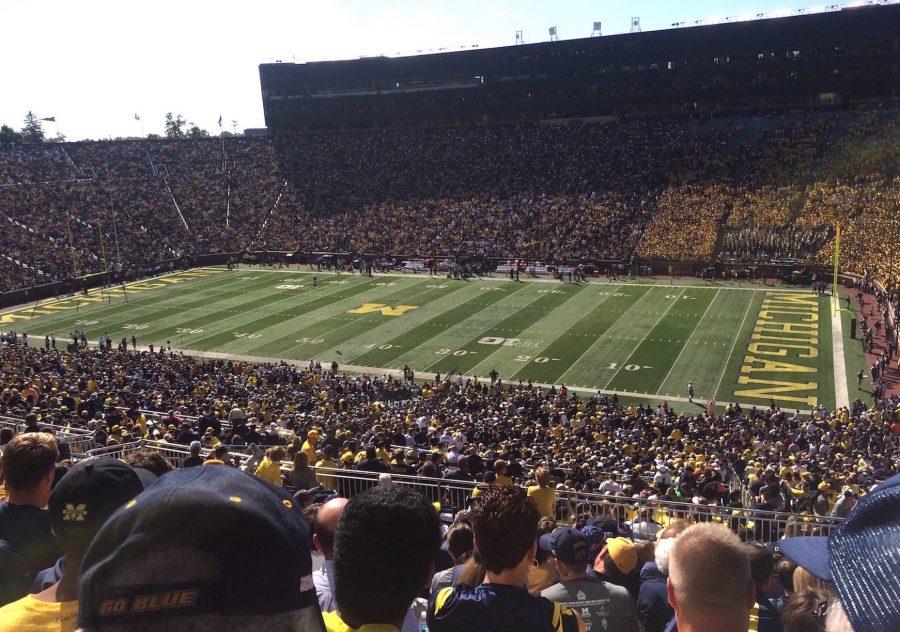 The University of Michigan football stadium in Ann Arbor holds nearly 110,00 people and is the second-largest stadium in the world.

I spent a recent weekend in Ann Arbor visiting the University of Michigan. On the September Saturday when I visited, the Big House — the nickname of the football stadium — was the epicenter of all school spirit, and everyone in town was headed to the stadium.

With nearly 110,000 seats, the Big House is the biggest football stadium in the United States and the second largest in the world, and is home to the most popular sport on campus.

The Michigan Wolverines were playing the Penn State Nittany Lions that day, and anyone wearing Penn State paraphernalia definitely had to watch their backs because of the sea of maize and blue that they were surrounded by. Walking into that stadium made Victory Field feel like a grain of sand! Everyone in the crowd seemed to know exactly what to do, as they had all been to many games before. To my surprise, the football players were not the only ones making the crowd go wild, as Michigan is also known for its world-class marching band. The band performed perfectly in synch, marching across the entire field in the shape of a big M, and delivering many renditions of “Hail to the Victors” (the Michigan fight song) for the crowd. It was truly a sight to see!

At Michigan, there is another team with talented players from all over the country and its very own pristine athletic complex dedicated to this sport. The field hockey team.

This Wolverines’ Division 1 team has a few outstanding recruits from the Netherlands and from all over the United States. All of these players were absolutely unbelievable, and I got to watch a very fast paced and intense game, one of the best that I’ve ever seen.

The University of Michigan has a whopping 26,000 undergrads in a fantastic college town. You can’t go 10 feet in Ann Arbor without seeing someone wearing the maize and blue. I have never experienced so much school spirit in my entire life.

The city of Ann Arbor is also home to numerous cute shops and restaurants that are perfect for any college student with a food craving, a sweet tooth, and a few extra bucks to spend. During my walking tour of the school, we focused on the Central Campus, and I was introduced to the beautiful architecture, both old and new, as well as the exciting atmosphere of this center of campus life.

There’s a strong contrast of grand, old buildings, such as the beautiful Law School library, to newer and more modern projects, like the new Business School, funded by an alum who donated $2 million.

In terms of classes and majors, Michigan offers numerous undergraduate study programs, including engineering, literature, science, arts, nursing, architecture, and urban planning. Michigan also has a very wide variety of world-renowned graduate programs. One advantage of going to Michigan is that its programs are top rated, across the board, so no matter what you decide to study, you will be getting an outstanding education.

Along with the wide variety of academically intense classes at Michigan, there is also a huge emphasis on social life. There are more than a thousand clubs to join, as well as a strong Greek life, offering about 60 fraternities and sororities. When I visited, it was rush week, and the campus was bursting with life and parties. Walking down to the stadium on game day was like one big party that the entire school was invited to. There’s so much to do both on and off campus, that you could not possibly be bored at the U of M!

All in all, it was a fantastic weekend, and I would highly recommend the University of Michigan to anyone considering a large, academically challenging school, with world-class sports programs, and spirited college community in a great Midwestern town!

Honor Petrie is a veteran member of the Raider Times staff.