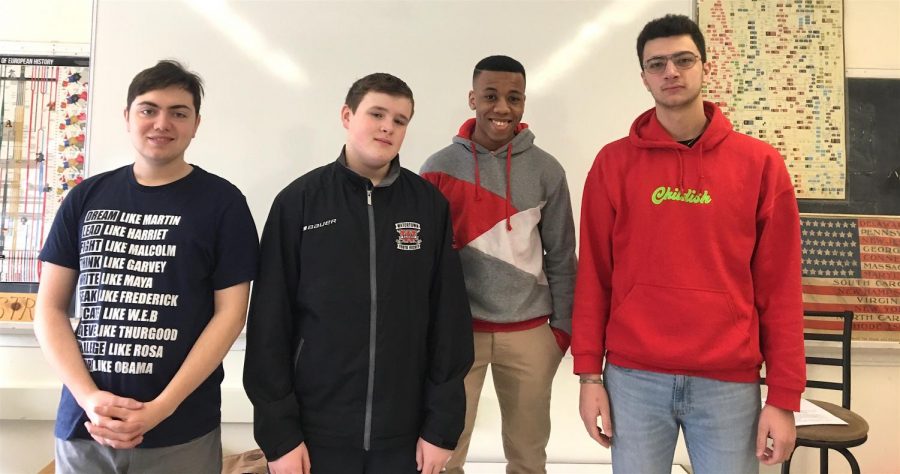 Watertown High students (left to right) Noah Ferraresso, Malcolm MacDonald, Brandon Alleyne, and Anthony Chebli will be among those competing for the title of Mr. WHS on Thursday, March 14, starting at 6 p.m. in the auditorium.

This year’s Mr. WHS competition looks like it’s going to be a tough run. There will be a lot of talent on stage at the 16th annual event, which will take place Thursday, March 14, at 6 p.m. in the Shaw Auditorium at Watertown High School. The competitors this year will be competing in formal and casual wear, a talent portion, an interview, and the rose ceremony.

Tickets are $7 in advance and $10 at the door. The competition is a fund-raiser for the Pride Committee, and it is sponsored by Formalwear Limited in Waltham. Mass.

Senior Ben Fandetti watched all the shows the previous years, and thought why not? The person who inspired him to do Mr. WHS was Gabe Cimino. Ben said he is funny and makes friends easily.

When asked if he could give any hints to his talent, Ben said, “This is it.” … and took a sip of Gatorade.

The reason why senior Max Bunnell is doing Mr. WHS is because he is broke and needs a tux. The person who inspired him to do Mr. WHS is dean of students Brian Brewer. Max wants people to know that he is friendly, sometimes.

When he saw the show, his favorite act was Maksim’s glow-in-the-dark routine. Max said people are going to have to go to the show to find out what his act is.

Senior Mange Camara said he is doing Mr. WHS for the clout — and the parking spot. Unlike the others, a teacher didn’t tell him to do Mr. WHS. Neither did a student. It was a vision of God and Jesus.

Mange wants people to know that he is a people person, likes to joke around, artistic, and a connoisseur of women. Just like Max his favorite act from a previous show, is Maksim’s dancing in glow-in-the-dark. Mange’s act is something musical.

Mr. WHS through the years 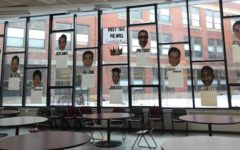 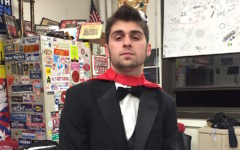 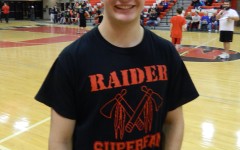 Ninth-grader Malcolm MacDonald said he is doing Mr. WHS because history teacher David Mastro told him to. One thing Malcolm wants people to know is it that he is going to win this competition. He hasn’t seen this show before, but he still wanted to be a part of it. For the talent portion he doesn’t know yet, so it’s even more of a surprise.

Senior Anthony Chebli is doing Mr. WHS because he wanted to tux. What inspired him to do Mr. WHS is that this show is the one thing his brother didn’t do. Anthony wanted people to know that he is very goofy, but has a serious side. His favorite act from a previous competition was when someone shotgunned four Fantas.

Senior Noah Ferraresso is doing Mr. WHS because he has had a great experience ever since he won this year’s talent show. The person who actually inspired him to do Mr. WHS was English teacher Tina Piscatelli.

Unlike some of these people, freshman Brandon Alleyne isn’t doing Mr. WHS because a teacher told him to, or because he needs a tux. He’s doing it, simply because it looked fun — although Mr. Mastro did inspire him. “Even though he kind forced me into it,” said Brandon.

We asked him what he wants the audience to know, he simply said, “Don’t mess with me.” When asked about his talent portion, he said it’s something creative. So be ready!

Isabella Nitschke is a member of the Raider Times staff.

Selin Kugu is a member of the Raider Times staff.