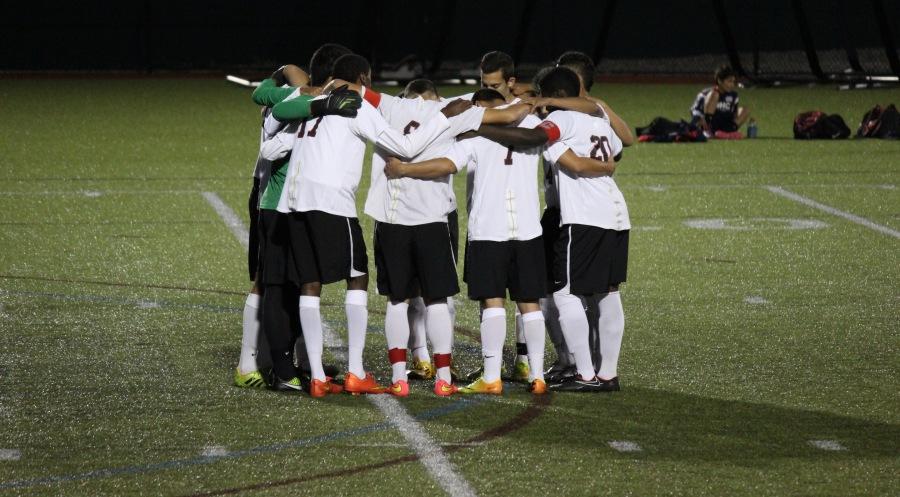 The Watertown High boys’ soccer team has regained its form in recent matches, racking up 7 of a possible 8 points in the last four games. The Raiders have improved their record to 4-2-1, leaving them tied for first place in the Middlesex League Freedom Division.

Still reeling from a 5-0 drubbing Sept. 11 at the hands of Winchester, forward Raffi De Souza buried two second-half goals to earn the Raiders a big 2-1 victory against Wakefield on Tuesday, Sept. 16.

On the first goal, De Souza found himself one-on-one with a Wakefield defender, before cutting right and firing home from 20 yards out, leaving the goalkeeper helpless as the ball whizzed over his head and just under the crossbar.

With the game knotted at a goal apiece, senior Demetri Dorceus drew a penalty with minutes remaining, and De Souza stepped up to seal the game for the Raider. He powered a shot just under the crossbar, in a similar location to his first goal, again leaving the Wakefield goalkeeper helpless as Watertown celebrated its go-ahead, and eventually game-winning goal.

De Souza has been racking up the assists this season, playing provider three times in Watertown’s 3-1 victory against Burlington Sept. 18.

Sophomore Igor de Souza (no relation to Raffi) scored five minutes into the game, before junior Roman Davis continued his goal-scoring form with two goals to kill the game off for the Raiders. Freshman goalkeeper Sergio Salas played his first full game in the starting role, and allowed only one goal while making five saves.

The Raiders started slow when they played host to Stoneham on Monday, Sept. 22, as they were goalless through the first half hour of play. However, once Igor De Souza opened the scoring at 32 minutes, he opened the floodgates. The sophomore scored again just minutes later, and Raffi De Souza and Davis added goals of their own to leave the score at 4-0 heading into halftime.

The Stoneham defense never recovered, as seniorsAraz Ashjian, Dorceus, and Chris Saroufim, and freshman Danny Zamora all pumped in goals in the second half to cap an 8-0 goalfest at Victory Field. Salas and senior Joe Keikian split the shutout, each playing 40 minutes between the sticks, neither allowing a goal and each making three saves.

After rattling off three straight wins, the Raiders hit something of a speed bump, as they marched into Wilmington on Wednesday, Sept. 24, to take on the Wildcats, with whom they were tied with atop the standings.

Davis and De Souza both managed goals in the contest, which was played to a 2-2 draw, leaving both teams right where they began the game, tied atop the standings.

Junior midfielder Hermes Melo, playing in his first game of the season, picked up an assist, as did senior Ulises Zamora.

As things stand, Davis currently leads the squad in scoring, with six goals, along with two assists. Raffi De Souza leads the team in points (9) as he has dished out five assists to add to his four goals.

The Raiders will host Wellesley in a nonleague match on Saturday night (Sept. 27) at 7 p.m. at Victory Field, before continuing their Middlesex League campaign against Melrose on Tuesday.