Raider boys lose battle of the boards to Wakefield 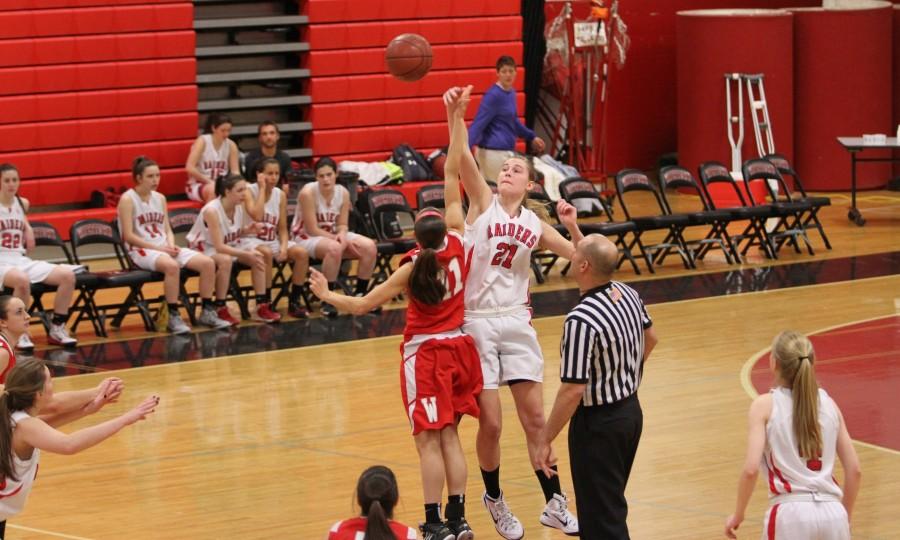 Watertown sophomore Shannon Murphy (21) had 17 points, 7 rebounds, and 8 blocks in the Raiders' victory over Wakefield on Jan. 2, 2015, at Watertown High.

With each squad returning to Middlesex League play, the Watertown High boys’ and girls’ basketball teams continued to move in different directions against visiting Wakefield on Friday, Jan. 2, as the Raider boys dropped to 2-4 with a final-minute loss, while the Raider girls continue to roll with another resounding victory.

Fresh off taking down Natick and Bellingham to win the Bellingham Holiday Tournament, the girls’ basketball team stayed undefeated at 6-0 with a 53-34 win over Wakefield.

Shannon Murphy led all scorers with 17 points, and the sophomore center dominated inside with seven rebounds and eight blocks on the night. Junior forward Katelyn Rourke collected five rebounds and blocked five shots of her own, as the Raiders allowed Wakefield no easy opportunities close to the hoop.

A 12-point Raider lead at halftime became an 18-point advantage during the third quarter, but a big Wakefield run at the end of the frame left Watertown up just 10 (41-31) going into the final period. The Raiders pulled away late on the way to a 19-point victory.

The win put the Raiders on top of the Middlesex League Freedom Division, 4-0 in league play, with Burlington up next on Jan 6.

For a Raider boys’ team coming off of a second-place finish at the Commonwealth Motors Christmas Classic, the night did not yield as successful of a result. Wakefield manhandled the Raiders on the glass, outrebounding Watertown, 42-15, en route to a 62-56 victory.

Wakefield’s Brian Dickey and Watertown’s Brendan Hoban led all scorers with 17 points each, and Raider senior Mike Hagopian had 15 points in the loss.

Raiders senior Nathaniel Munson-Palomba also had a strong performance, with 10 points, including a buzzer-beating-and-one putback at the end of the first quarter.

Watertown took a 31-27 lead at the half despite the rebounding disadvantage. The lead was just a point going into the fourth quarter, after Dickey drilled a half-court prayer as the buzzer sounded to close the third quarter.

It was Dickey who came through for the Warriors late, knocking down a huge 3-pointer with under a minute remaining to put his team up by 5, and the Raiders missed multiple 3-pointers in the final minute.

A free throw from junior John Miller left Wakefield up 6 (62-56), which would prove to be the final score.

The setback dropped the Raider boys to 2-4 on the season, sitting in third place in the Middlesex League Freedom Division, as they move on to face first-place Burlington on Jan. 6.