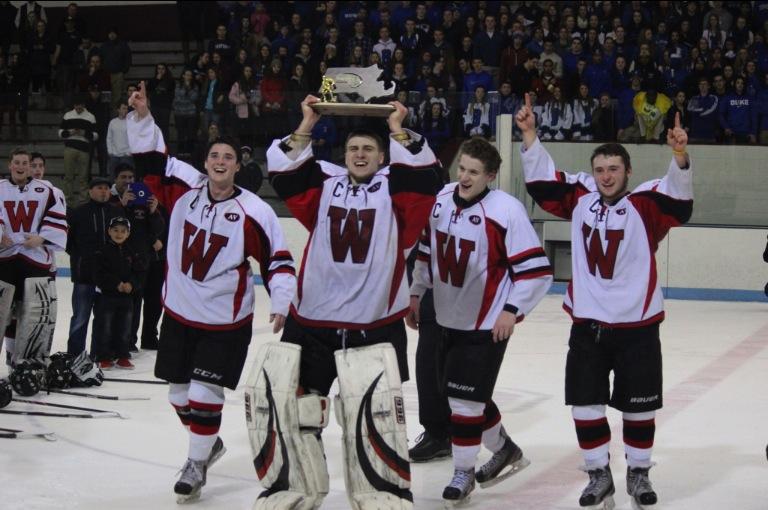 Great hockey teams start with a great goaltender, and when you have someone like Anthony Busconi manning the net, you have to feel good about your chances.

Led by a spectacular 34-save performance from its senior goaltender and two goals from junior Tyler Poulin, the Watertown High hockey team reached new levels of success Friday night in Billerica with a 2-1 win over Bedford for the Division 3 North championship.

The Raiders (14-3-7) await Sunday’s game between Norwell and Hanover to discover their opponent in the Division 3 state semifinal game.

“It feels awesome, all of our hard work paid off,” said senior captain Austin Farry. “Starting in December, coming in after losing a lot of guys from last year, everybody stepped up. We’ve played as a family and as a unit, and everyone’s done their jobs.”

Despite a lot of early chances Friday, the Raiders found themselves down early for the second time in a row. A rebound from a Busconi save fell to Bedford sophomore David Bartkus, and the Buccaneer forward buried the opening goal past a diving Busconi seven minutes into the game.

“I don’t think we played our best game,” said Farry, “but sometimes good teams win games that they’re not supposed to.”

Finding themselves in a familiar spot, in a nearly identical scenario to their previous game against Wayland, the Raiders responded exactly how they had before: quickly.

It took just four minutes for the Raiders to knot things up, when Poulin, who had been struggling to find the net this postseason, scored his first goal of the playoffs to level things at 1.

Though they were outshot by the Bucs, 11-8, through one period, and 24-15 through two, the quality chances were about even, and it was the Raiders who would capitalize on their chances. Good teams tend to get a little lucky, and luck was on Watertown’s side for their second goal when Poulin’s centering pass was turned into the net by a Bedford defenseman. Poulin was credited with his second goal of the game to pull the Raiders in front, 2-1.

Poulin, one of the team’s leading goal scorers in the regular season, had been goalless through three postseason games, and finally found his breakthrough with the two most important goals he may ever score.

“[The key is] just to try and not get frustrated, and to trust myself and my teammates and the goals will come, if I continue to work hard and battle and continue to find scoring chances,” said Poulin.

Poulin was also pivotal on the defensive side, particularly on two of Watertown’s penalty kills, as the forward seemed to be all over the ice. He almost single-handedly killed off one Bedford power play with a long solo puck possession and played a big part in killing off another.

With a lead established midway through the second period, the rest of the game was the Anthony Busconi show. Watertown’s all-star goaltender was impeccable between the pipes over the final two periods, making improbable stop after incredible save all night along, putting on a goaltending clinic at the Chelmsford Forum.

“He’s the best goalie in the league, no doubt,” said Tyler Gardiner of his teammate. “I’m sticking with that.”

With a one-goal lead and Busconi standing on his head, things got tense over the last 10 minutes. The Buccaneers (13-7-3) went on an all-out attack, putting immense pressure on the Raiders and peppering Busconi with shots from all over the ice.

Watertown head coach Mike Hayes called timeout with only a few minutes remaining, attempting to get his team back on the right track, to get his players to breakout and relieve the pressure on their zone.

“He didn’t really change anything, he just got us motivated,” Farry says. “He’s been telling us all year how proud he was of us, and we just took that and got motivated to win the game for our town, and our coach, especially.”

The Raiders finally managed to break the puck out and ended up with multiple scoring chances of their own, nearly clinching the game on multiple occasions. They probably would have, if not for the excellent play of Bedford goaltender Matthew Judge down the stretch. Judge, though overshadowed by Busconi’s heroics on the other end, was spectacular in his own right in the final 15 minutes.

The Buccaneers goalie kept his team’s comeback hopes alive in the final period with multiple huge saves, highlighted by a breakaway stop of Jeff Comeau with 1:03 remaining that would have sealed a Watertown victory.

With the door firmly shut by Busconi and strong defense in the late stages of the game, the buzzer sounded and the Raiders were able to raise the Division 3 North trophy, the first in program history.

“It’s a phenomenal feeling,” said Gardiner. “We worked so hard all year, and to get rewarded like this, it’s a surreal feeling.”

The Raiders will next play on Wednesday, March 11, at 6:45 p.m. at Gallo Arena in Bourne for the chance to play at TD Garden for the Division 3 state championship.