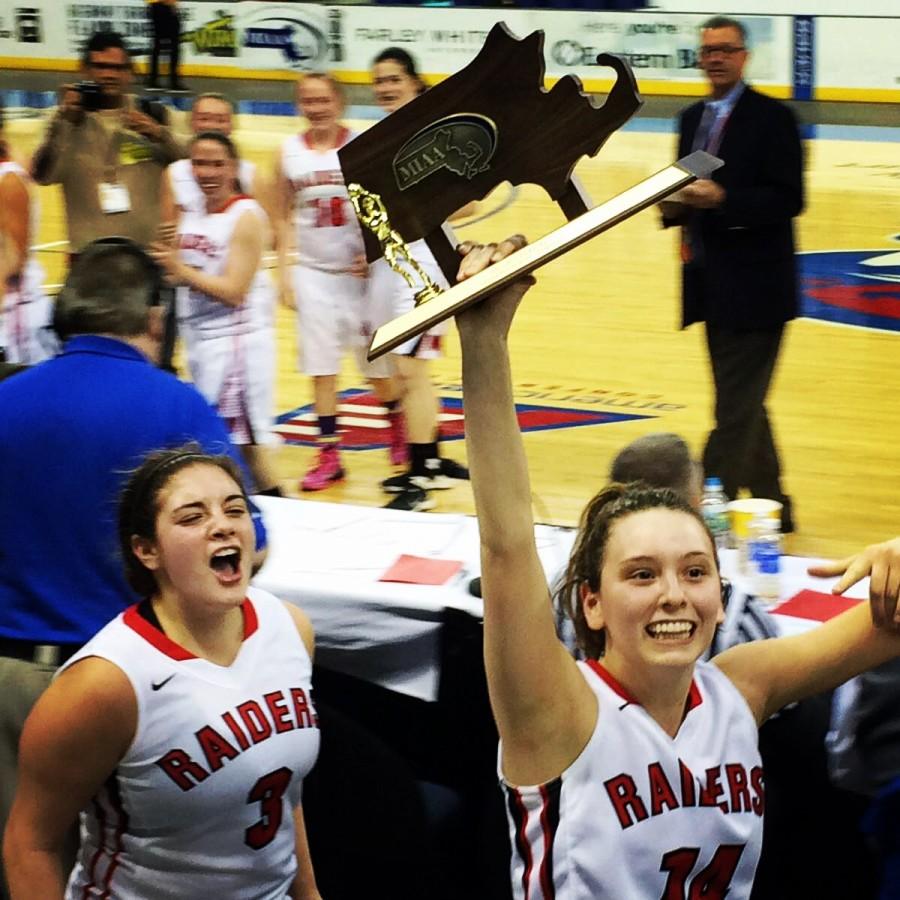 Basketball coaches always emphasize the importance of free throw shooting, and there’s a reason for it.

It took a standout performance from junior Michaela Antonellis (15 points) and some cold-blooded free throw shooting from senior Gianna Coppola as the Watertown High girls’ basketball team claimed the Division 2 North crown with a nail-biting 44-40 win over Pentucket on Saturday in Lowell.

“A win’s a win,” said Watertown head coach Pat Ferdinand. “We have a great team, and we did a great job of executing and taking care of the ball, for the most part. We hit some clutch shots when we needed to, and everyone was mature, engaged, and locked in.”

Coppola stepped to the line with a 2-point Raider lead and 14 seconds on the clock, and with the game — and the season — on the line. The senior knocked down two free throws to the lift the Raiders to the Division 2 North title.

“She’s clutch,” said Ferdinand of Coppola. “She’s got ice water in her veins.”

Playing in the Tsongas Center in front of a massive Pentucket crowd — which was all dressed in beach-themed costumes — the Raiders came out firing on all cylinders, quickly jumping out to an 11-3 lead. However, several Watertown turnovers and 11 first-quarter points from McNamara left the Sachems on top after one quarter.

McNamara finished the first half with 15 points, but the Raiders took a 21-25 lead into the half, knowing the task of shutting down the Sachems star was on top of the agenda.

“We actually thought we were doing the right thing,” said Ferdinand, “but we decided we had to sit on her right hand more and extend the defense out a little further.”

The job of shutting down McNamara fell to Felicia Korte, and the Raider junior’s aggressive defense was key in limiting the Sachems’ leading scorer to only 8 points in the second half.

Antonellis led the offensive charge in the second half and played a key role in helping the Raiders break the game open. The Watertown lead was eventually stretched to 12 after back-to-back Coppola 3-pointers.

A big 3-pointer from Sachem sophomore Colleen Jameson in the final seconds of the third quarter, however, cut the lead to 9 going into the final eight minutes of play.

“I thought [Antonellis] was phenomenal,” said Ferdinand. “Earlier in the year, she had some anxiety over replacing Gabby [Coppola, Watertown’s 1,000-point scorer and 2014 graduate].

“I always said, ‘Make your own footsteps. You don’t have to follow in anyone’s footsteps,’ and she’s been a great leader.”

With Pentucket down by 6 points and four minutes to go, McNamara made her biggest play of the game, utilizing a deadly stepback move to create space and connect on a huge 3-pointer to bring her team within 3, (41-38).

She very nearly brought the game within 1, but found herself on the receiving end (and on her backside) of a huge block from Raider sophomore Shannon Murphy (8 points, 10 rebounds, 6 blocks).

The Sachems eventually closed the gap to a single point, at 41-40, and the final minutes were tense as can be.

Everyone in the building was feeling the weight of the situation — except Coppola.

The Watertown senior was fouled went 3 of 4 from the charity stripe in the final 30 seconds to seal the win.

On her first trip, she made the first, but missed the second. Pentucket’s Audrey Tipson grabbed the rebound but went down with a knee injury on the play, fumbling the ball out of bounds.

Coppola caught the inbounds pass, was fouled, and calmly knocked down both free throws to put the Raiders up, 44-40, with 14 seconds remaining.

McNamara’s desperation shot on the other end rimmed out, and the Raiders ran out the clock and began their celebration.