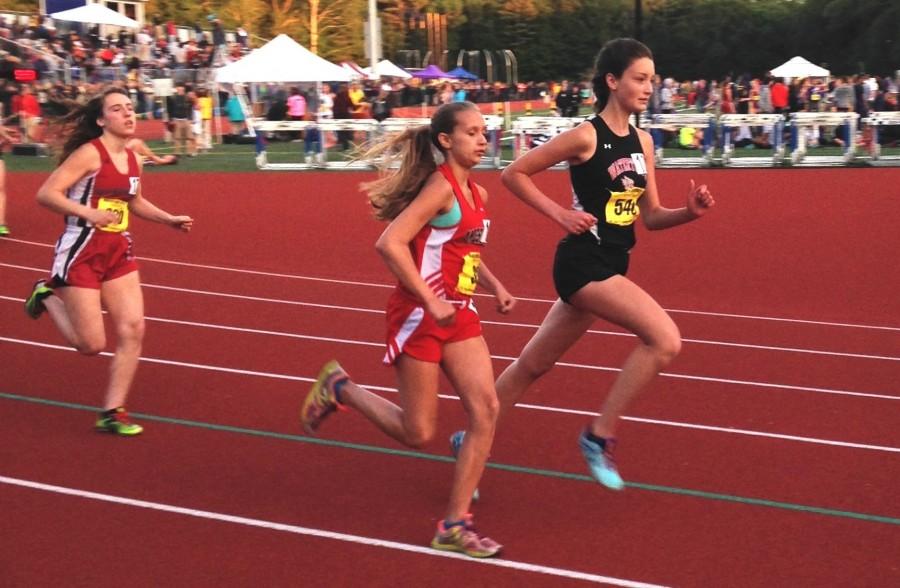 Watertown High freshman Elizabeth Powderly (right) competes at the MIAA Division 4 track championships in Norwell on Wednesday, June 3, 2015. Powderly set a Watertown High record with her time in the 2 mile, finishing in 11:53.65.

The Watertown High outdoor track team has zoomed into statewide conversation as having some of the best athletes in the state.

On Wednesday, June 3, a small group of students who qualified for the MIAA Division 4 track championships took to Norwell High School to compete for titles and placements and to move onto All-States coming up this Saturday.

The main talk before the event? How annoying the weather was going from warm to cold, back and forth. Nerves were high all round, but that didn’t keep these runners from slowing down.

Powderly, Touri, Tolman, and Koufos were in the first event, the 4×800-meter relay, starting the competition off on a high note when they placed second in 9 minutes 48.75 seconds. With that time, they qualified to compete in All-States this Saturday. Even more exciting, the team also qualified for Nationals in North Carolina on June 19.

Powderly, a freshman, set a Watertown High record in the 2-mile, finishing in 11:53.65 and placing ninth out of 27 girls.

“Running with all the girls in the 2 mile was such an unreal experience,’’ she said. “It was a long eight laps, but it goes a lot faster than you think.”

Also representing Watertown High was senior Brian DallaCosta, who won the outdoor pentathlon, an event that is made up of the shot put, 100-meter hurdles, long jump, high jump, and the 1,500. He finished first with 2,907 points, breaking the meet record of 2,609 he set last year.

The All-States this Saturday are next for Tolman, Lubega, DallaCosta, Amin Touri, the girls’ 4×800 team, and the boys 4×400 team.

For some of the athletes, the meet was the end of a great season. If you ask anyone on the track team what is life, almost 100 percent of the time they will say, “Track is life.” The WHS competitors at the Division 4 meet truly embodied that in their performances.

When Powderly was asked about the season as a whole, she said, “I think our outdoor season went really well, both the boys and the girls. Both teams got really good individual times and our relay teams are really strong,’’ she said. “I hope for next year we can win some dual meets.”

But next year they will be without their seniors.

“We are really gonna miss Tina, Molly, Keegan, and Sahar [Khan, one of the WHS captains]. They were not only really strong runners, but always really supportive and close friends.”