A kick for the ages 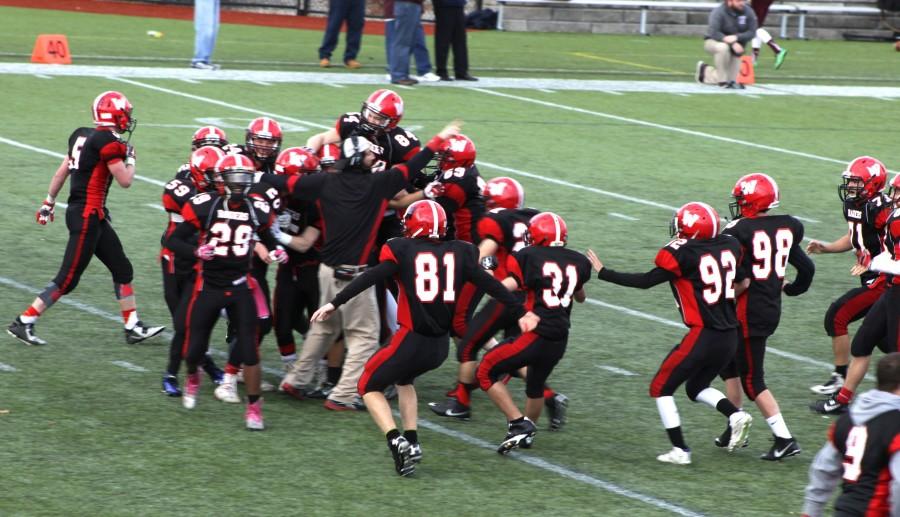 Though just a sophomore, Conor Kennelly knew the 35-yard field goal in front of him may be the kick of his life. But with the game on the line, and ice in his veins, Kennelly delivered.

With 13 seconds remaining in the 94th edition of the Watertown-Belmont Thanksgiving football game, Kennelly drilled the winning kick to lift the Raiders to a thrilling 24-22 win over their fiercest rivals at Victory Field.

“I was just thinking about how much work we’ve put in this season, how hard the seniors have all worked,” said Kennelly, “I just wanted to get the win for the team, for the program.”

Belmont coach Yann Kumin called a timeout to try and ice Kennelly, but he was unfazed.

“Honestly, it just gave me more time to calm down, get my head straight,” said Kennelly.

It was a good snap from Zach Rimsa, a good hold from Dan Farrar, and from there it was all Kennelly.

He sliced the kick left, but put it through anyways, then turned and sprinted down the field in celebration as his teammates ran from the sidelines to mob their kicker.

“I feel awesome,” said Watertown coach John Cacace. “We won a Thanksgiving football game for the fourth year in a row. It’s an awesome feeling.”

It was a messy, penalty-plagued morning at Victory Field, as both sides reached double digits in flags, a majority coming by false start or offsides.

“We really didn’t play our game,” said senior captain Stevie Mey. “We made a lot of mistakes. Lot of penalties, lot of blown coverages, but at the end of the day we got the win.”

“I do not think we played a great football game,” said Cacace. “Lot of mistakes, lot of mental mistakes, lot of things we coached up during the week that we didn’t execute on the field today, but the thing I’m most proud of is that this group has never quit. They’ve never stopped playing, they never pointed a finger, and that’s what this program is all about.

“That will be a great life tool for these guys, that when adversity strikes, you just keep fighting.”

It was a perfect day for Thanksgiving football, and the it was the Raiders who would strike first on their home field. After Deon Smith was intercepted in the end zone by Marauder senior Kevin Martin, the Raiders forced Belmont to punt, but Lowell Haska couldn’t handle a high snap and was brought down at his own 19, giving the Raiders great field position late in the first quarter.

On the very next play, Smith found a hole to his right, scampering to a 19-yard touchdown to give the Raiders a 7-0 lead.

Belmont came right back in the second quarter, showing off their passing game in contrast to Watertown’s option offense. Led by junior quarterback Cal Christofori, the Marauders drove down the field, aided by a big pass interference call. Christofori found Joe Shaughnessy on a slant route across the middle for a 7-yard touchdown midway through the second frame.

The Raiders, who usually see very run-heavy offenses, had some trouble stopping the passing game all morning.

“What [Christofori] is really good at is rolling out,” said Mey. “He doesn’t sit in the pocket, but he won’t really look to run. Even if he’s got some space in front of him, he’ll just roll out and wait and eventually find his receivers getting open. It happened, to me, it happened to a couple other guys.”

Smith took the kickoff to the Raider 46 to give his team great field position. Watertown then pieced together another impressive drive, highlighted by a 29-yard run by Smith. Senior Kyle Foley capped it off with a 7-yard touchdown run, diving for the pylon to give the Raiders a 14-7 lead with just 41 seconds left in the half.

With very little time to work with, Christofori showed off his arm in leading Belmont down the field, making multiple key throws to put the Marauders in field goal range. Raider senior Tyler Poulin wrapped up Belmont running back Mekhai Johnson (15 carries, 52 yards) at the 18 to save a touchdown, and the Marauders had to settle for a field goal to make it 14-10 going into halftime.

The Raiders caught a break coming out of halftime, when some confusion between Belmont players led to Mey jumping on a loose ball, handing Watertown the ball on the Belmont 22. A few plays later, Foley walked into the end zone from a yard out for his second touchdown of the day to put the locals up, 21-10.

Foley, who usually lines up outside the tackles as a wide receiver, was as surprised as anyone about his performance on the ground.

“I didn’t expect that,” said Foley, “It’s not too often that that happens, but I do what I can, and it was just a good day for me.”

On the ensuing drive, mistakes plagued the Raider defense. Two bad penalties — roughing the passer after a stop on third and 7, and an offsides call on fourth and 3 — helped bail out the Marauders in key situations. Soon, Johnson punched it in from a yard out to close the gap to 21-16.

The momentum seemed to be shifting Belmont’s way, as a series of Raider mistakes handed their rivals a gift midway through the fourth quarter.

Smith’s kick return to the 46 was negated by a personal foul, pinning the Raiders deep in their own zone. The Raiders offense stagnated, and they were forced to punt. But Justin Wagner blocked Foley’s punt, and the Marauders got the ball on the Raider 10.

Two plays later, Ben Jones rumbled into the end zone for a 6-yard touchdown. An unsuccessful 2-point conversion gave the Marauders a 22-21 lead.

The Raiders tried to respond, but Smith threw an incomplete pass on fourth and 3, giving the ball back to Belmont, as things looked bleak for the home side. However, after forcing Belmont to punt with less than two minutes to go, the Raiders had life.

With just under 1:40 to work with and without any timeouts, Smith led what may have been the most impressive drive of the season, ripping off big play after big play. Multiple big runs from the junior quarterback and a 20-yard throw to Poulin, brought the Raiders all the way down to the Marauder 18.

“I was very impressed, it was perfection,’’ said Cacace. “We did everything right on that drive. We executed, we got out of bounds, we just played terrific, and that’s a testament to these kids and their confidence in their own abilities.”

Watertown couldn’t convert on third and 4 at the 18, and the field goal unit had to come out with 13 seconds remaining.

The ensuing celebration drew a 15-yard unsportsmanlike conduct penalty, but it wouldn’t matter. The scoreboard read “Raiders 24, Belmont 22” and there would be no comeback for the visitors.

“I had complete faith,” said Cacace,  “The whole time I was just thinking that we had to get inside the 20, and we could get Conor out there.”

It was a thrilling win to cap off the season for the Raiders, but a bittersweet one for a group of seniors playing the final game of their high school careers. Included in that group were Poulin, Foley, Mey, Farrar, Farid Mawanda, Luis Moradel, Robert Kennedy, Barry Dunn, Erick Yax-Vidal, and Jake Leitner.

“It’s an amazing feeling, but a lot of mixed emotions,” Mey said. “The last game ever for a lot of us, and we worked so hard this year, I’m just glad we won.”

With the win, the Raiders finished 7-4 and topped their rivals for the fourth consecutive year.

“As a senior, you don’t want to go out any other way,” said Foley, “we really came together, and it was a great win.”

As you entered the Raiders locker room this season, the first thing you saw was a list of goals, which included a positive turnover ratio, a league title defense, and a playoff run. The Raiders checked off another goal, “Beat Belmont” with their Turkey Day victory.

The final goal on that list, however, was the one most important to this team: Become a family.

“I think we accomplished that,” said Mey,  “There were a lot of bumps in the road. For a few weeks, we weren’t [a family], but after we beat Stoneham, and went into Lynnfield and North Reading in the playoffs and got those wins — and even when we lost to Stoneham in the North finals — no one quit on each other.

“Everyone plays for each other on this team, and I had never been a part of anything like that. It was pretty awesome.”

Hannah McCall is a member of the Raider Times staff.