Back with one goal in mind 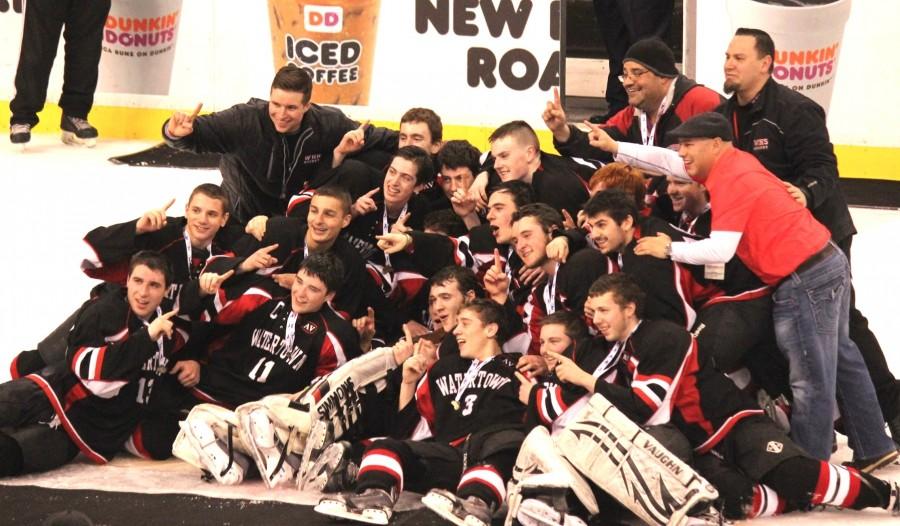 The last time the Watertown High hockey team played a game that counted was March 15, 2015, and the Raiders ended up on the TD Garden ice celebrating the Division 3 state championship.

The only thing harder than winning a title is defending it.

Nine months removed from a Cinderella run to the first state championship in program history, the Watertown High hockey team is hitting the ice again, gearing up for its title defense.

“It’s crazy how fast time has flown by since freshman year,” Poulin says, “but I’m excited to get back on the ice and defend the title.”

“I’m very excited for it,” said Giordano, “but it’s kind of sad because I’ve been playing with these kids my whole life.”

All nine Raider seniors have been on the team since their freshman year, and many have been playing together for the better part of a decade.

“It’s definitely exciting,” says Gardiner. “It’s exciting because I’ve been playing with these kids since I was 5 years old, but it sucks at the same time. I’ve had so much fun playing high school hockey through my four years here.”

The goal is to win another state championship. It’s been the goal since Day 1, freshman year. ”

“It’s crazy to think that it’s already senior year,” says Martino. “It feels like just yesterday that I started freshman year on the fourth line, never really playing … Now I’m a senior and a captain, and it just feels great to be back with the team and we’re really looking forward to it.”

In March, the Raiders made an improbable run to the state title, as they only had 18 players in the program, and were without a JV or freshman team. It was a title run that would have been impossible without senior goaltender Anthony Busconi.

Busconi was untouchable throughout the season and into the playoffs, en route to his second consecutive Middlesex League MVP award, as well as spots on the Boston Herald and Boston Globe’s All-Scholastic teams.

With Busconi moving on, senior Jason Hughes, who has never started a varsity game, finds big shoes to fill between the pipes.

“I think it’s a good challenge for me,” says Hughes. “I think that it’s going to be tough, but I’ve got some good guys testing me in practice and I think I’m up for the challenge.

“It’s definitely tough experience-wise. I just played my first two varsity games this past weekend, and it was a good chance to really see the tempo and the pace of the game for the first time. I think I can definitely make the adjustment.”

Hughes, who was solid in his first two scrimmages, is one of the only definite things on a Raider team full of question marks and low on numbers.

“Right now we’re just trying a whole bunch of different things,” Gardiner explains. “We’ve put Matt [Busconi] and Barry [Dunn] back on defense, Mike Giordano has had a couple chances back there, [Tyler Poulin] will have a couple, and I’ll have some, too. We’ll just be rotating some forwards back at defense, and we don’t know exactly how it’s going to play out, but we’re going to find something that works, because Coach [Mike] Hayes always has ways of figuring everything out.”

The impact players returning from last year’s team will have to step it up to compensate for the lack of depth.

“I think our strength is just the core group that came back,” says Gardiner. “We have a strong core coming back from last year, seven or eight guys that really know how to play, and we’re fast, and powerful, and can score goals.

“Our biggest weakness is probably going to be depth. When we get to the third period, we’re all going to be a little tired, especially when we’re playing back to back. That’s our biggest weakness, but that’s never stopped us before. We didn’t play with a lot of guys last year, and we won it all.”

“I’d have to say our biggest strength is probably our speed up front,” said Martino. “We’ve got some good, fast forwards that can get the puck deep and catch teams off guard. There’s also our hard work, and our unity we have a really tight bond as a team.”

Still, as the Raiders prepare to open their season against Arlington next Wednesday, everyone is unanimous in regards to the ultimate goal.

“The goal, of course, is to go back to the Garden and win state again,” says Martino. “The sky’s the limit for us, there’s no reason for us to think that we can’t do it again.”

“The goal is to return to the Garden and repeat,” Poulin says, “but in order to achieve that, we have to play hard day in and day out, and stick to our systems and stick together.”

“The goal is to win another state championship,” says Gardiner. “It’s been the goal since Day 1, freshman year. Just because we won one doesn’t mean we can’t chase another one, so that was the goal in the offseason and we’re going use last year’s experience and learn from that to go get another one.”