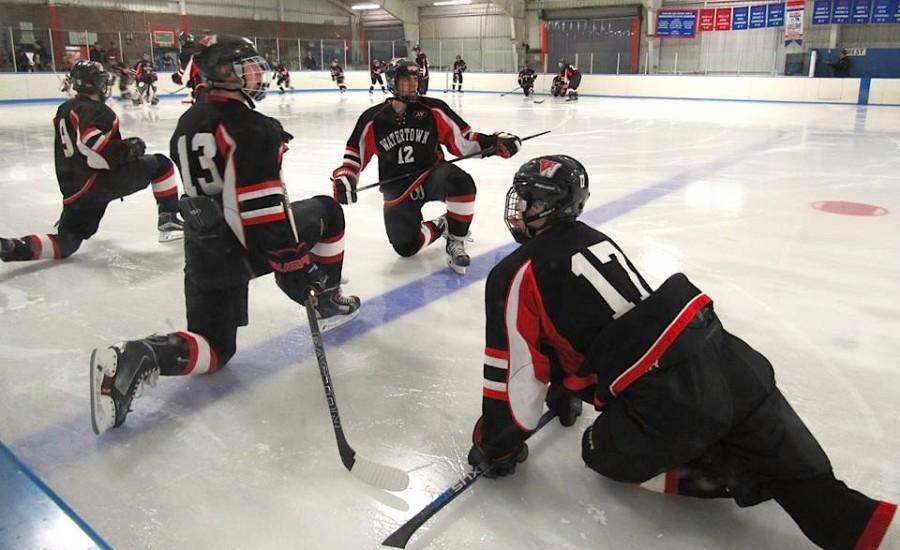 The Watertown High hockey team stretches out prior to its game against host Belmont at Skip Viglirolo Skating Rink on Jan. 27, 2016.

It’s been an up-and-down season for the Watertown High boys hockey team.

Despite no shortage of goals on the offensive end of the ice, there’s still plenty left to sort out defensively for a Raider team that graduated all four members of last year’s defensive rotation — as well as two-time Middlesex League MVP goaltender Anthony Busconi — as the defending Division 3 state champions look to make a final push heading into the playoffs.

After taking a 1-0 nonleague win over Swampscott, the Raiders took the ice last Wednesday for their biggest regular-season game of the year against Belmont. The Raiders fell just short to their rivals, 4-3, despite a spirited third-period comeback.

Following a scoreless opening frame, the second period was nothing short of a nightmare. A pair of goals by Belmont captain Dave Bailey gave the Marauders a 2-0 lead, and sophomore Connor Dacey added a third to leave Watertown reeling.

The Raiders weren’t backing down, however, as a huge goal from Raider senior Nick Martino in the final seconds of the period silenced the Belmont crowd, and cut the lead to 3-1 heading into the final period.

The lead was cut to just a goal in the early minutes of the third period when senior Michael Giordano buried a rebound to make it 3-2 with 12 minutes to play.

Hopes of a Watertown comeback took a blow with eight minutes to go. Belmont junior Cam Jefferson went bar-down on Raider goaltender Jason Hughes, leaving Hughes with no chance as the Marauders took a 4-2 lead.

Raider senior Tyler Poulin, in a near-replica of his highlight-reel goal against Marlborough earlier in the season, kept Watertown hopes alive with just under seven minutes to go. He put an offensive-zone faceoff through his opponent’s legs and roofed a shot past Marauder goaltender Kevin Dacey to cut the lead to one once again.

That would be all she wrote, however, as the Raiders couldn’t find one more breakthrough, taking a 4-3 loss at the hands of their rivals.

Four days later, it would be more of the same against Middlesex League powerhouse Burlington, as a Tyler Gardiner hat trick wasn’t enough for the Raiders, as Watertown fell, 5-3, to move to 6-9 on the year.

The Raiders now enter the final stretch of their season. They finish up with a four-game homestand — Stoneham (Feb. 3), Wilmington (Feb. 6), Melrose (Feb. 10), and Wakefield (Feb. 13) — followed by a trip to Marlborough to take on Nashoba Regional as Watertown still holds out hopes of a winning season going into the playoffs.