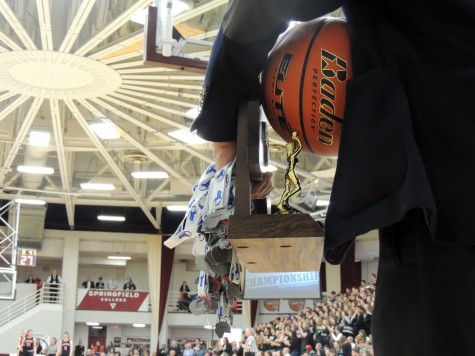 SPRINGFIELD — So close, yet so far.

The winter season ended in heartbreak for the Watertown High girls’ basketball team, as the Raiders fell to Longmeadow, 36-31, in the Division 2 state championship game on Saturday afternoon at Springfield College.

The Raiders were up by as many as 8 points in the second half, but an offensive nightmare of a fourth quarter saw Watertown held entirely scoreless until the final 10 seconds, while the Lancers went on a 15-0 run to claim their first state title. 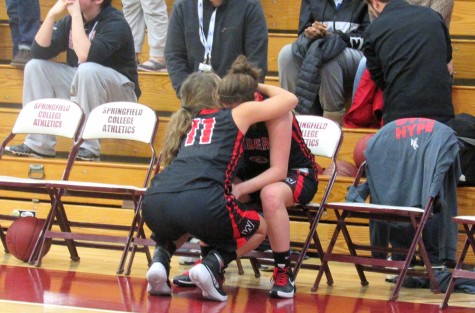 “Overall I’m still proud of this team,” said Watertown head coach Pat Ferdinand. “I’m upset at this point, but I think I’m hiding it pretty well. But I’ve gotta be able to look back and say, ‘They took it to the next step, and I’m really proud of them.’ ”

“We’d played well in spots, at points,” said Ferdinand. “Sometimes the ball went in, sometimes it didn’t. As [WHS dean of students Brian Brewer] tells me, the game plan is that the team that scores the most points wins, and we didn’t tonight.”

“They were just tough,” said Raiders senior guard Michaela Antonellis. “They were really good rebounders. There was nothing we really could’ve done better.” 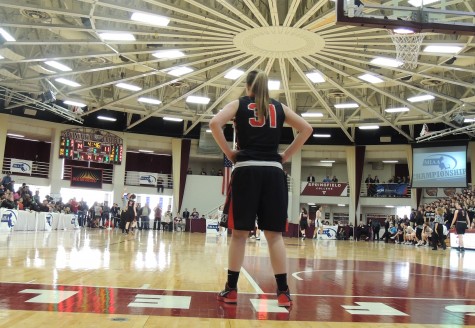 After a strong third quarter, the Raiders went ice cold in the fourth as every shot they threw up just refused to fall.

“We took good shots,” said senior forward Katelyn Rourke. “They just weren’t falling when we needed them to fall.”

The Watertown defense was strong as usual, holding their opponents to only 36 points. It was the offense that struggled, as not a single Raider reached double digits. Rourke and junior Shannon Murphy still had strong games underneath, as Rourke had 9 points and eight rebounds on the afternoon, while Murphy scored 8 and grabbed nine boards.

Longmeadow’s biggest force on both ends came in the form of sophomore center Kayla Mokwuah, who put up 13 points while grabbing seven rebounds and blocking six shots.

Mokwuah, who stands a towering 6 feet 3 inches, got the Lancer crowd into the game with her emphatic rejections. 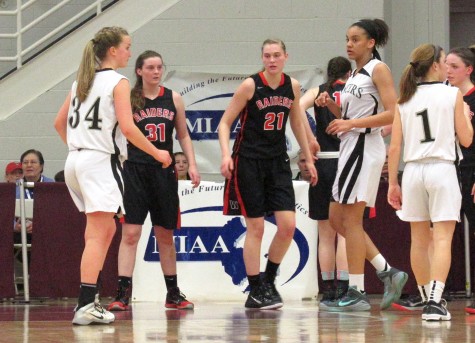 As they had throughout the postseason, the Raiders got off to a slow start, and the Lancers jumped out to a 7-2 lead. Mokwuah led the way, posting Longmeadow’s first 5 points.

Again, as they had all postseason, the Raiders clawed their way back into it, and Antonellis knocked down a 3-pointer late in the first to make it 10-9, Longmeadow, after one quarter.

The teams were very evenly matched through the first two quarters and went into halftime tied up at 21.

Coming out of the break, the Raiders looked like they were ready to take home their state championship.

“We were moving the ball really well and talking really well,” said Antonellis. “Our defense was really good, blocking their girls out.”

Watertown went on a run in the third quarter, scoring the first 8 points. 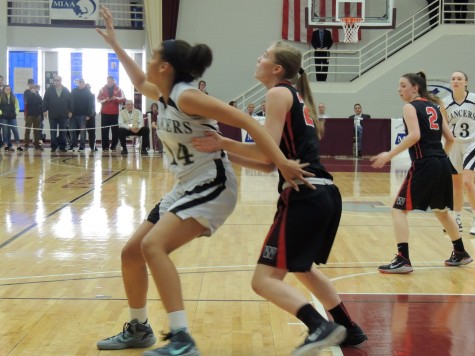 The Lancers were sagging off Antonellis as she brought the ball up, and she walked up to the top of the key and nailed a wide-open 3-pointer with 3:19 left in the third to give the Raiders a 29-21 lead.

On an 8-0 run and picking apart Longmeadow’s zone, it looked like the Raiders might just pull away. They were feeling confident.

“I did feel like, now we’re going to have to go man-to-man, execute, and run our stuff man-to-man,” said Ferdinand. “I think when they went to man, and defended, we didn’t move the ball enough. When we drove in, sometimes the ball didn’t go in, but we could have been more patient to move the ball to extend [Mokwuah] out of the paint, to get more stuff.”

Antonellis’s triple was the start of an 11:00 scoring drought, and the Lancers came firing back, going on a 15-0 run through the third and fourth quarters.

“Our emotions started to get the best of us once they went on their run,” said Rourke. “[Pat] just pulled us in, and told us to play the game we know how to play. We’ve done this a million times, we’ve been here a million times, but we just couldn’t pull through.” 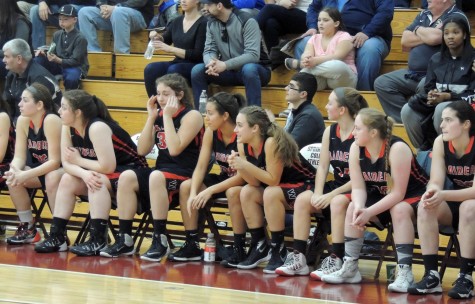 Absolutely nothing would fall for the Raiders in the fourth. Murphy and Rourke had layups bounce out, Antonellis pulled up in the lane and saw her shot rim out, and the Raiders weren’t getting any calls underneath, never seeing the free throw line in the final quarter.

Meanwhile, the Lancers were rolling offensively, and Mokwuah was imposing her will inside. Olivia Shapiro drilled a three with 2:15 remaining to make it 36-29, and Watertown’s title hopes were slipping away.

Senior Felicia Korte’s layup with 10 seconds to go finally ended the drought, but it was too little, too late, and the Lancers dribbled out the clock and began their celebration, while the Raiders were left in tears.

“We’re all so proud of each other,” said Rourke, “but we just didn’t hit the shots we needed to.” 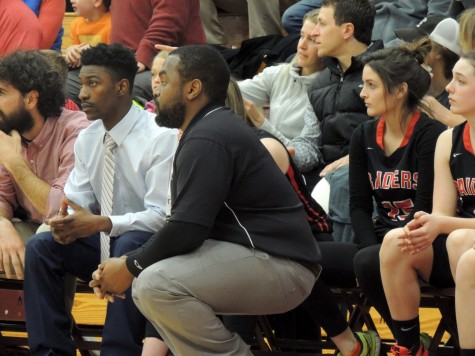 “I’m really proud of the girls,” said Ferdinand. “The whole goal, the whole wish, was to finish it off. But I’m going to take a step back and look at this, but I’m really, really proud of them and all the work that they’ve done, and their dedication to the program.”

The Raiders had to play without one of their starters in senior guard Nicole Lanzo, who went down with a knee injury in the state semifinal game four days earlier. Junior Hanna McMahon again had to fill in a larger role than usual.

“I think she did a great job,” said Ferdinand. “I think early on, she tried to do way too much, and she was kind of playing in the moment and being way too aggressive. But then she got to a point where she was just defending, she got rebounds, she got putbacks, she was moving the ball well, had great decision-making. I thought she played really well.

“With Nicole’s injury… She’s so much of our heart, you know. She’s a good rebounder, she’s tough, she’s got a midrange jump shot, but offensively, she’s really secure. She’s never trying to do too much, and there’s not many times Nicole puts herself in bad positions on the floor.” 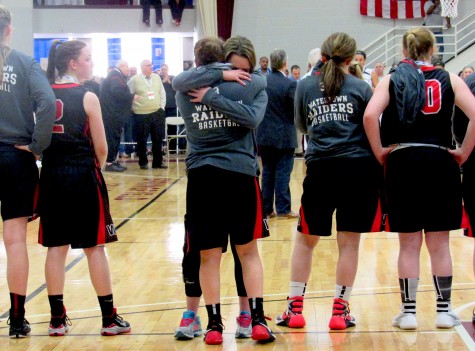 After the buzzer sounded, and before receiving their state championship finalist trophy, the Raiders walked back onto the court wearing their warmups, heather gray long-sleeved shirts with the words “Heart Over Hype” across the front in red, block letters.

A reminder that heart can go a long way, and hype means nothing.

The Raiders might be disappointed, but with another Middlesex League championship banner to add to Watertown High’s Kelly Gymnasium, a Division 2 North title for the WHS trophy case, and an EMass crown won on the TD Garden floor, this is a team with plenty to be proud of.