After making her mark on the national level in Mexico, Lilian Marr Calderon ready to suit up for the Raiders 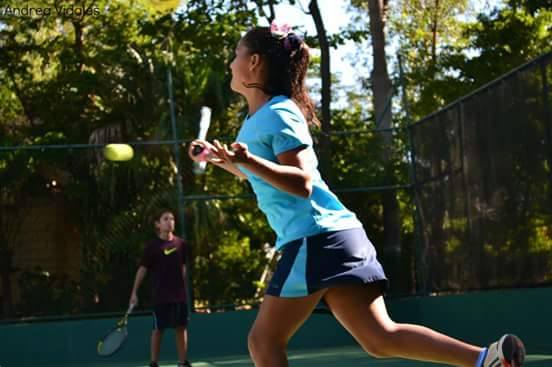 Lilian Marr Calderon, the newest member of the Watertown High tennis team, grew up in Mexico.

Lilian,17, is originally from Culiacan, Mexico, but frequently moved around the country until her family finally settled in Navojoa, a city in the northern Mexican state of Sonora. Last summer, Lilian’s family moved from Navojoa to Watertown, a transition that has been vastly different than previous moves.

“The main reason we moved is me,” Lilian said. “My father thinks that I can have a better future and more opportunities here.”

Though they’ve visited the United States many times, this is the first time her family has moved to the US. They picked Watertown specifically because Lilian has relatives that live in town.

Lilian started school at WHS in September, and her younger sister is in elementary school.

In comparison with her community in Mexico, Lilian feels Watertown is much smaller. Culiacan spans 24.32 miles and has more than 600,000 inhabitants, a size and population much greater than Watertown’s. Though no stranger to change, Lilian said that life and culture here contrasts a lot from what she’s used to.

“[Adjusting to] the school, the people, the food, it was kind of hard,” she admitted.

Though Spanish is Lilian’s mother tongue, she has done quite well with English, given that she’s only spoken it with her father at home and studied it a little at school in Mexico.

An important part of her life that Lilian hopes to continue here is tennis. From an early age, Lilian was pushed by her family to pursue the sport. Initially she was reluctant to start. After a lot of persuasion from her father, she eventually tried tennis and her first racquet was a gift from her uncle in Boston. Lilian’s father, a tennis instructor from the La Quinta Racquet Club, taught Lilian her first lessons when she was 7 years old.

Training with her dad is challenging. “He’s taking care of me all the time, as a father and as a coach,” Lilian said.
Though it is nice to have such great support, occasionally Lilian feels pressure to perform with her dad watching on the side. But she said she’d never trade the experience. And by having family so invested in the game, her tennis lessons never finish on the court.

With all her great training came great success. Lilian played in many important tournaments in Mexico, representing both her club team and Sonora. Last year, she emerged a winner playing doubles at the statewide level, and moved onto sectionals, where she played champions from the four remaining Northern states.

But it doesn’t end there. Three times, Lilian has represented Sonora in Mexico’s National Olympics. Unlike in sectional and regional tournaments, there she faced opponent from all 31 states in the country. She played mixed doubles (two people per team, one male and female), doubles (two people per team, all female), and singles. Lilian was ranked 20th in the entire county after the National Olympics, and says her experience competing at such high levels was very rewarding.

Lilian plays in junior tournaments for the United States Tennis Association (USTA). Just recently, she received her membership and met with her coaches and fellow players. Lilian will also be playing on the Watertown High team, and will, without a doubt, leave a mighty mark on the courts!