Blaming the gum and switching the shoes 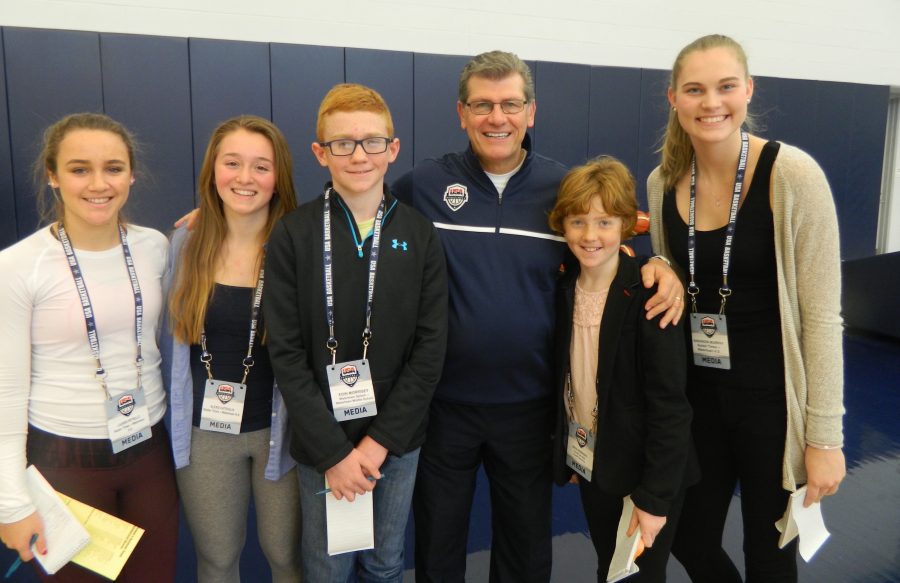 Gallery|6 Photos
Geno Auriemma (third from right) poses with student reporters from Watertown, Mass., at the US Olympic women's basketball camp on Feb. 21, 2016, on the UConn campus.

If you are an athlete, artist, or any type of performer at all, you can appreciate the “science” of superstition. Whether it is a full ritual or a small act, these routines can have a major mental influence on performers and how they are able to execute.

The 2016 US Olympic women’s basketball team is no different.

However unlikely, almost every single one of the women admitted to having some sort of superstition. It can be understandably mistaken that players like these wouldn’t need game rituals for luck, but the US Olympic team seems to hold a sincere connection with their traditions.

The players talked during the US Olympic camp on Feb. 21 on the University of Connecticut campus. The country’s top 25 players were invited to come to the three-day camp to compete for the dozen spots on the final roster. The players answered a variety of questions, most of them geared toward the practice of pre-game and pre-practice rituals.

Brittney Griner, the 6-foot-8-inch powerhouse who plays for the WNBA’s Phoenix Mercury, is making her Olympic debut this year at Rio. Throughout her career, she has proved to be a force to be reckoned with on the floor, averaging 14.5 points, 7.5 rebounds, and 3.6 blocks per game.

When asked if she had any pre-game rituals, she said that she always listens to music. Although this initial comment is common among many athletes, it was later discovered that her real superstition lies in her shoes.

Whenever she plays a “bad” game, she must buy a new pair of basketball sneakers. It is currently unknown what Griner considers to be a “bad game”, or how often it occurs, but if she plays with her usual dominance, no shoe will hold her back at the 2016 Olympics.

Griner was not the only superstar with crazy superstitions. Elena Delle Donne, a 6-5 guard, starts every game off with a piece of gum and has admitted to spitting out her chewing gum whenever she believes she is having a “bad” game. She does this because, as she mentioned in a sarcastic tone, “It’s obviously the gum’s fault.”

In a similar way, UConn star Breanna Stewart now finds herself spraying her hair after her an incident freshmen year. At one of her very first games at UConn, Stewart was just playing her game, when her teammates began commenting on her unruly hair. From that game forward, Stewart has been rocking the slicked-back look.

Center Stefanie Dolson is also worried about her looks. She explained how she keeps her game-day ritual simple. She has to wear makeup and her hair has to look good. When this simple yet, very different tradition was questioned, she stated confidently, “Look good, feel good, play good,” and beamed a smile with her perfectly done makeup and colored hair.

Leading the Olympic team this summer will be the dignified head coach Geno Auriemma. He has coached at the University of Connecticut for more than 30 years and has created a legacy.

He was won 11 national championships at UConn, building the most successful women’s collegiate team in history. Although he doesn’t currently have any superstitions, it did not start out that way.

As a young coach, Auriemma said he once won a very important game for the Huskies, and later discovered a dime and two pennies in his pocket. For many games after that, he sought out the exact dime and two pennies he found the first game to put into his pocket, worrying something would go wrong if he didn’t have them. As he matured as a coach and found more success, he changed his views.

It is this mind-set has brought him and his team immense success over the years.

It is obvious that the players and coaches heading to the Olympics this summer have achieved their goals regardless of their personally unique superstitions. The bottom line is that they are tremendous athletes with the skill and work ethic that can not be compared to any other national team. But as athletes, artists, and humans, we honor and respect their rituals.

At the end of the day, the mind is a powerful thing. Hold on to your superstitions because maybe one day, they will win you the gold.

Lauren Petrillo is a member of the 2015-16 Raider Times staff.

Shannon Murphy is a member of the Raider Times staff.

Alexis Catsoulis is a veteran member of the Raider Times staff.