Rowing on the Charles River has an irresistible pull

Community Rowing Inc. offers everything needed for people to learn and love the sport 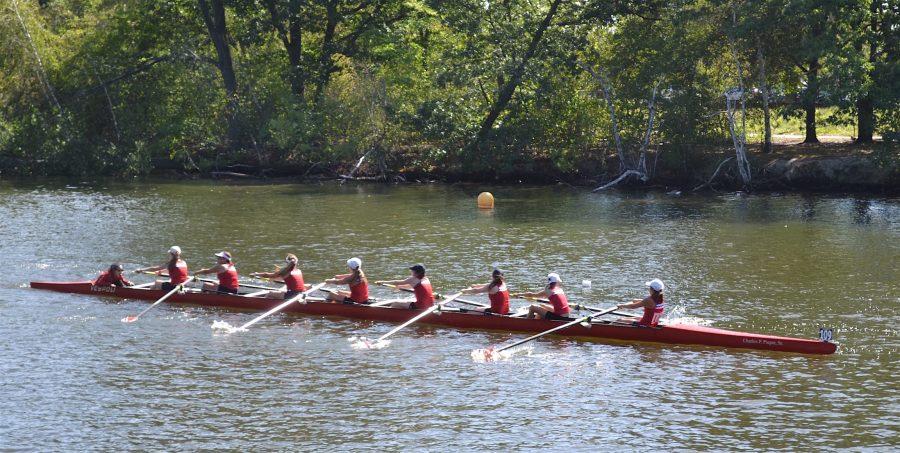 The novice girls competitive team from Community Rowing Inc. gets its work in on the Charles River.

Once in awhile during the fall of New England, you’re blessed with a brisk day that makes you want to sit outside and just clear your mind and release stress. The sun would be out, and just enough clouds to provide relief that you don’t get the horrible tan lines that scream, “Yes, I really did stop watching “Grey’s Anatomy” on Netflix and leave my house!”

But as a rower, those are the best days with or without tan lines. Those kinds of days make rowing 10Ks beyond bearable, even fun, with the wind blowing lightly on your back and your teammates all smiles and inside jokes.

I’ve never been a “sporty” person, but something clicked the first time I put my oar blade in the water”

Part of the reason many students here at Watertown High don’t row is because they don’t understand it.

“You row? That’s just canoeing isn’t it?” and “Your arms must be jacked!”

Community Rowing Inc., one of the best boathouses on the East Coast, is a short drive away from Watertown Square. Every day people from the age of 5 to 75 are on the water honing in on skills for the sport they love, being taught to be in synch with others and their bodies on the water, connecting and steadying a boat.

Rowing isn’t easy either; it’s considered one of the most physically and mentally demanding sports out there. But to rowers, we wouldn’t have it any other way. It’s what we love and what we do, six days a week, in pouring rain or 100-degree days.

I started rowing during the spring of freshman year. Now, 18 months later, I am on the novice girls competitive team.

From the Head of the Charles to the Head of the Fish in New York, athletes from my boathouse compete in their red, white, and black uniforms in the sport they love, rowing against thousands of crews from across the country and around the world.

After hearing this, many people think that they can’t row because they’ve started too late or don’t have access to the equipment needed to row. However, that’s not true! Community Rowing Inc. in Brighton, offers learn-to-row programs to competitive programs, and offers everything needed to succeed in the sport.

I’ve never been a “sporty” person, usually sticking to the light booth in the auditorium instead or hitting the gym, but something clicked the first time I put my oar blade in the water and I wouldn’t think to stop now. I tried karate in elementary school, but after having my best friend (mind you, a way higher belt color than my white belt) bruise me after sparring with her, I felt like I was destined to fail. But, for anyone who feels like that, I urge you to leave your comfort zone and try rowing, because it just be what you feel you’re missing.

The work you do for the sport might make you feel like you’re slowly dying and that you might vomit at any second, but rowers wouldn’t have it any other way. That way we know we’re putting our best in on and off the water.

“I don’t wanna feel like I’m going to vomit for fun,” trust me, neither do I. But if you ask any athlete — especially rowers — they will tell you that if you’re not feeling exhausted after a hard workout or race, then you didn’t put in the work.

For rowers, putting in that work is what we are trained to do. Pushing yourself to go faster, row harder, move more. It’s a constant mental game for us, and we’ve learned to love it.

Rowing’s changed my life for the better, and spending my afternoons on the Charles is the only thing I can think about after a long day in a classroom.

(For more information on Community Rowing Inc., go to https://www.communityrowing.org/.)