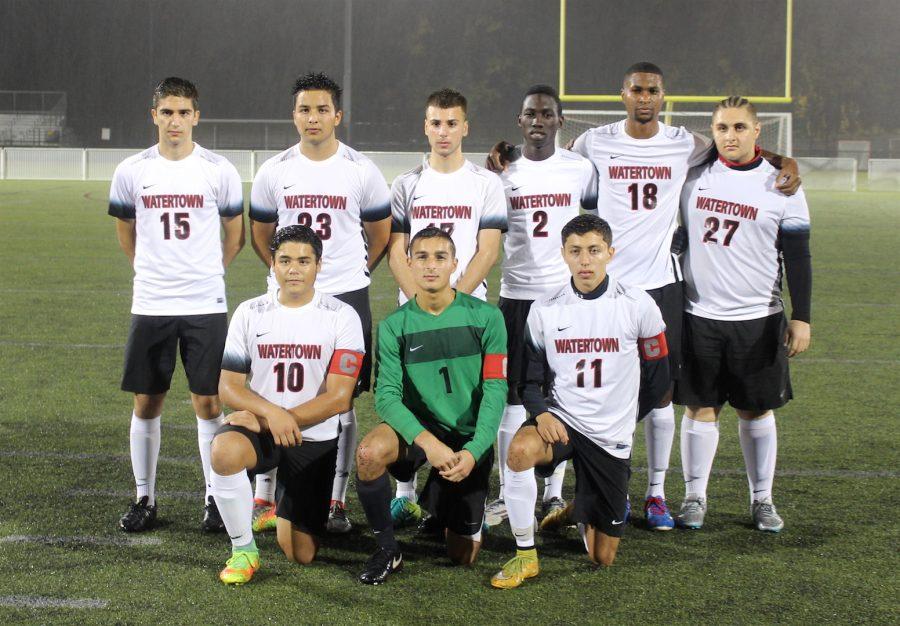 As the Watertown High boys’ soccer team get set to enter the MIAA state tournament, we look back on the past year’s success. Sporting the record of 9-7-2, the Raiders certainly came to play this season.

They won their last three games of the regular season. As a result, for the first time in Watertown history, the Raiders claimed the Middlesex League (Freedom Division) title. A very encouraging accomplishment heading into the postseason.

The Raiders started their season to a crummy 0-3 record, however things quickly shifted when the Raiders beat conference rivals Burlington twice; both on senior captain Jackson Da Silva’s set pieces.

The Raiders head into the tournament with a very young team but rather smart. Coach Frank Cacia has made the transition for the first-year varsity players a breeze and it’s showed on the field.

Da Silva commented on the change of dynamics compared with last year.

“Last year we had more skilled players, but we didn’t make it far,” he added. “This year with an average team, the quality of the game is much better.”

Leadership was something the team lacked last year.

“It was all individual play,” Da Silva said. “We weren’t playing as a team. We were out there individually. Sloppy soccer, not what Watertown is supposed to be represented as.”

Senior captain Andres Arenas added “tension between some teammates overshadowed our commitment to the game.”

Change was imminent; this year the Raiders got things started early into the summer by holding captains practices. The captains made sure all returning players were fit and ready to go. As for the first-year varsity players, they had a long road ahead of them.

Sophomore Luke Murphy was one of the players who transitioned from junior varsity to varsity.

“I didn’t know what to expect on Day 1, but I was glad to see the seniors leadership guide me into the direction of a varsity-tier athlete,” he said.

Murphy, already a standout hockey and lacrosse player, quickly took the spot at center back and has started every game this season.

The Raiders got the results they wanted this fall, showing many signs of improvement. One obvious one was junior Robert Danielian, who led the team in both goals and assists and is having himself an unforgettable year.

Come playoffs the Raiders are going to be in great shape. The team redeemed itself. It is a new team.

One thing is for certain, new team culture yields better results and if the Raiders keep on continuing to play this way anything could be in store.

Areg Ghahraman is a member of the Raider Times staff.