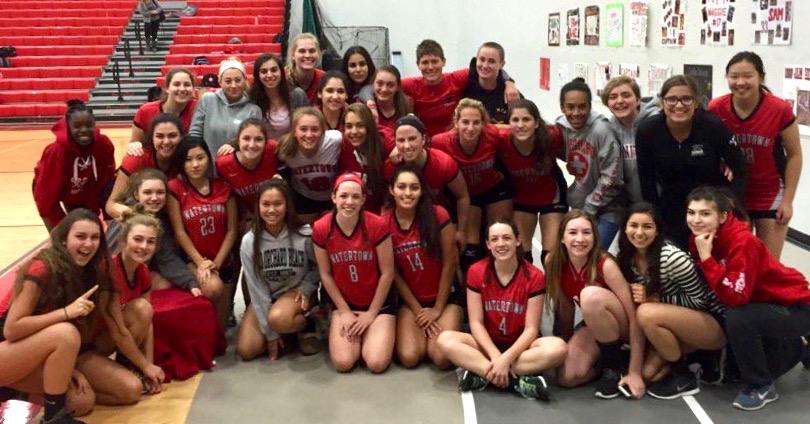 The Watertown High School volleyball team went 10-9 in 2016 and earned a spot in the MIAA Division 2 North tournament for the first time.

Starting strong with the first serve of the night, Watertown won its first game after several kills and aces, giving the Raiders a 1-0 lead. With their confidence high, and the excitement still rolling, the second and third matches were wins, too, moving them forward to the quarterfinals.

“I am proud of the way our kids traveled to a new school and handled their first tournament experience,” said coach Mo Hamel. “We have yet to travel outside of our comfort zone, so the way they were able to focus and get ready to play was exactly what I was looking for. I’m very proud of how far we have come!”

The Raiders will next play either No. 5 Burlington (17-3), who they have already played twice this season, or No. 12 Bedford (12-7), depending on the results of a match taking place Friday night.

WHS lost to Burlington, 3-0, in both meetings.

“The first game we did not play well, second we played much better,” said Hamel.

No matter the outcome of the game Monday, the Raiders had already made history, being the first volleyball team from Watertown ever to make it to tournament, and now by winning their first-round tournament game.

A big congratulations goes out to all the players and coaches on their big success!

Kaitlin Tracy is a member of the Raider Times staff.