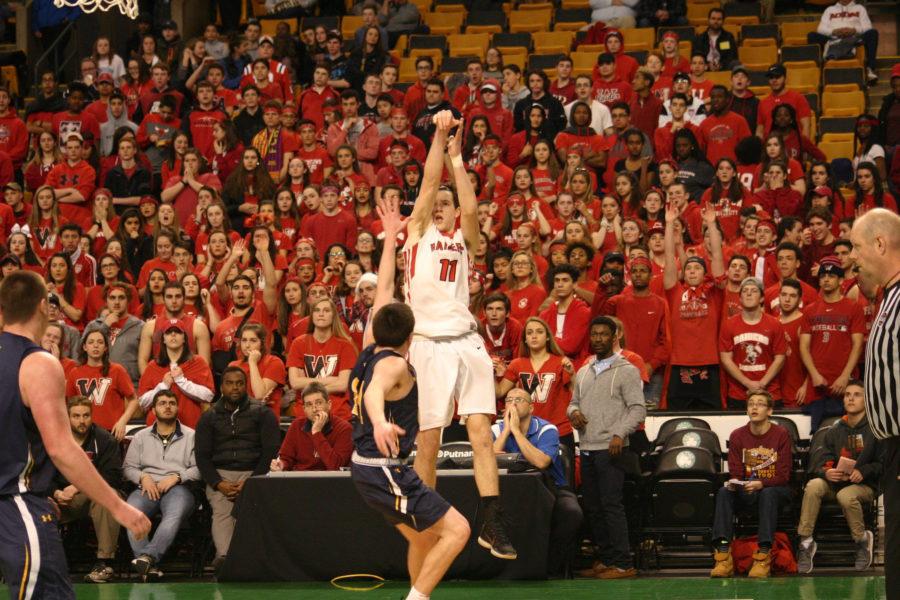 Gallery|52 Photos
Raider Times photo / Elizabeth Allen
The Watertown High School fan section has John Korte’s back as the junior goes up for a shot against Hanover in a Division 3 state semifinal game at TD Garden on Monday, March 13, 2017.

The dominant season of the Watertown boys’ varsity basketball team has come to a close.

Watertown (21-3) managed to overcome a slow start as the Raiders did not make a shot until there was less than five minutes remaining in the first quarter. Coach Stephen Harrington was forced to call a timeout when Hanover jumped out to a 9-4 lead. However, WHS brought the game close again to close out the first quarter, trailing 11-8.

The Raiders tied it up in the second quarter, thanks to a number of steals and solid defensive plays by junior guard Julio Fulcar. With one minute remaining in the half, they took the lead on a 3-pointer by junior John Korte. Korte scored 14 in the first half and 21 points overall to lead the game in scoring.

Hanover had a more balanced attack, with two players in double figures and even scoring around the board. Watertown did not make any substitutions until the last minutes of the game, relying heavily on starters Korte, Fulcar, senior Isaac Huff (3 points), sophomore Vondre Chase (4 points), and senior Jayden Hairston (4 points).

The Raiders had gone on a romp through the playoffs, beating North Reading, Lynnfield, and Bedford to win the Division 3 North title. Hanover proved a tough match from the beginning, however, frustrating the Raiders offensively and defensively. Harrington only had one thing to say about what needed to be improved upon as Watertown took a 3-point lead into the second half: “We need to make some shots.”

To begin the second half, this hope of beloved math teacher “Harry Hoops” seemed to come true: the Raiders started making some shots in a back-and-forth game, and gradually took a 4-point lead. This was to the delight of the Watertown fan section, filled with students dressed in red from head to toe. The yells of the raucous crowd seemed to fill the entire TD Garden.

But a late surge and defensive stand by Hanover prevented the Raiders from advancing to Springfield and the MIAA state championship game.

The Indians tied the game, 28-28, heading into the fourth quarter. After a number of clutch threes, floaters, and free throws, stretched their lead to 9 points. Watertown did not score for more than seven minutes and were not able to recover the lead.

The Watertown players seemed to be getting frustrated as the time ticked down and their shots weren’t falling. The Raiders went 1 for 11 from 3-point range, an aspect of their game where they have previously been more successful.

The Raiders tried bringing out a full-court press with four minutes to go, but Hanover still managed to get to the basket and the foul line and extend their lead to 40-30.

Watertown’s substitutes were brought in with under two minutes remaining in the game. Watertown still attempted to stop the clock and move the ball up the court, but continued to struggle getting open shots.

When the final buzzer sounded and the Hanover players ran onto the TD Garden parquet to celebrate, the Raider student section had lost much of its earlier bravado. However, the team was given an ovation as it left the floor, as well as a chant of “We still love you!”

The Raiders came up empty in the final game of the season, but their magical run through the playoffs will not quickly be forgotten by their loyal fans who came along for the ride.