During game nights, there’s a lot going on in the sports network’s nearby production facilities 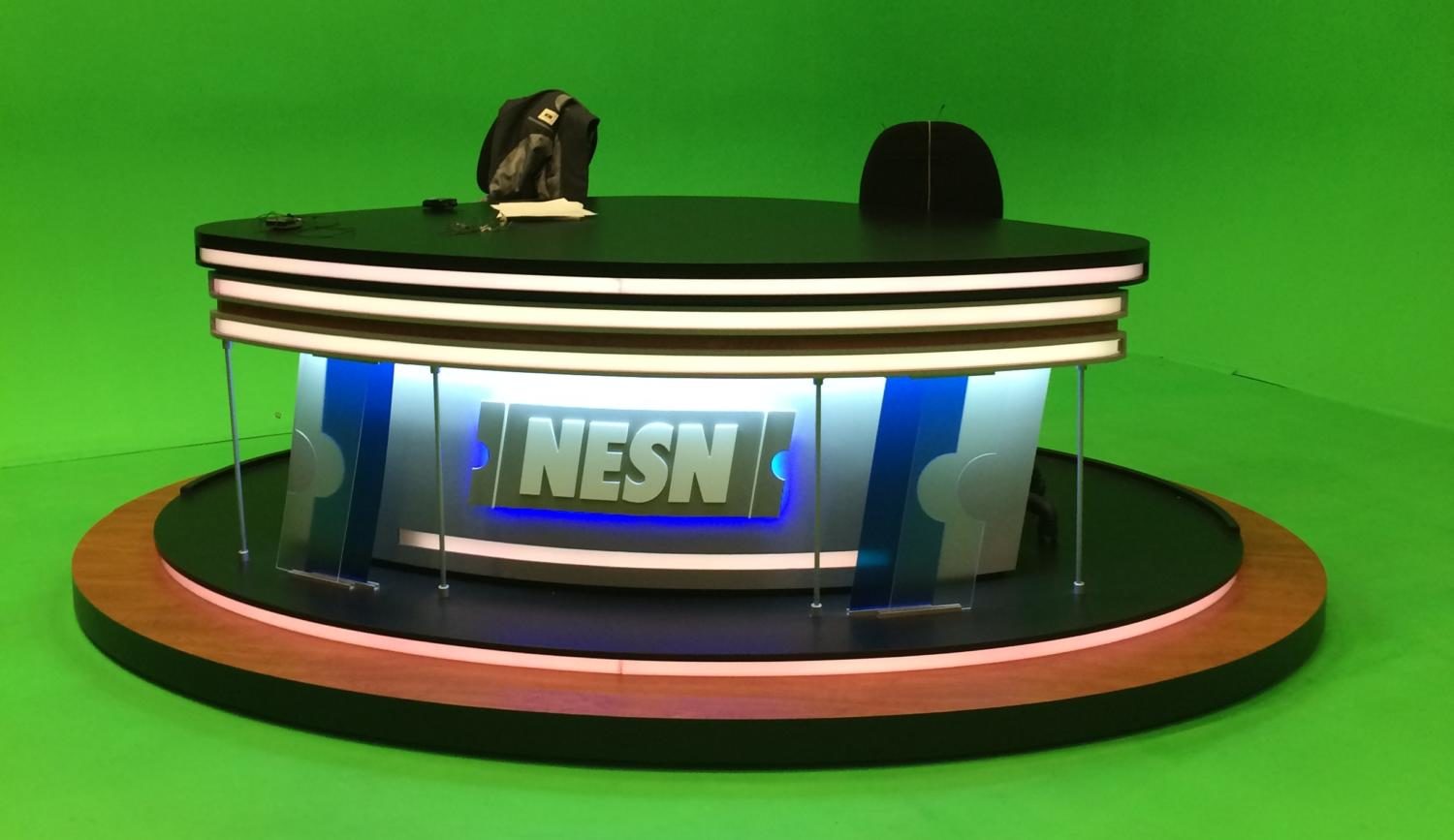 Studio B, with its green-screen backdrop, is where shows such as “NESN Sports Today” are filmed inside the Watertown, Mass., production facilities.

The Bruins are in Toronto to kick off the most important stretch of their season as they fight for playoff position. Back home, fans are ready to tune in to the game on their televisions.

But right here in Watertown, the preparations have been going on for hours to make that happen. In the NESN studios at 480 Arsenal Way, the entertainment is being put together as eager viewers wait for the game to start.

I enter the complex, which is behind the Watertown Mall and the bike path, guided by Gary Roy, the marketing and communications manager. Gary has been there since 1994, when NESN had studios in Fenway Park.

As we sit in a conference room, he tells me that there are plenty of paths to NESN. He got involved because he wanted to work for the Red Sox, but he ended up working down the hall when NESN was small. They now have almost 200 employees and are broadcast throughout New England and across the nation.

We head into the production control room, where director Amy Johnson is preparing for the upcoming show. On the wall are a dozen monitors, all with highlight reels and commercials playing that are about to be inserted into the feed. The room is small, with three rows of desks for the employees.

Down the hall in the darkly lit main control, even more screens are up, showing what is being broadcast throughout New England in the different regions (they vary their advertisements). It is slightly larger than production control, but with monitors on almost every surface it seems quite cramped.

Dale Arnold, the longtime commentator for NESN and WEEI radio, is in the building for the NESN pregame show. He had rushed in from his radio show and is preparing to go on set. Arnold and Billy Jaffe will host, leading into the broadcast of the actual game from Toronto.

There is a youth hockey team, the Bay State Breakers, in the studio to film a segment called “Pee-Wee Saturday,” which had been postponed to Monday because of snow. Because of this added element, things are a bit more rushed today as the staff gets things set for the pregame show on top of this.

We head into Studio A to watch the taping of the show and the set-up for the pregame show. The studio is a large space with faux-wood walls, huge monitors, and Boston sports colors (red, blue, yellow, and black). Lights are rigged up above the desk where Arnold and Jaffe will sit.

The girls from the team come into Studio A, sit on the “bleachers,” and are directed by the floor manager to practice cheering for the camera. A few have chosen questions to ask to Bruins players. The players’ responses have been taped, so the only live element is the girls talking to the camera. After a couple of slip-ups, the segment is recorded, and the girls go back downstairs to gleefully watch themselves appear on television. Arnold is a true professional, calmly coaching the girls through their lines and cues with ease. He chats easily with the girls, but when they are gone he focuses in on the notes for the show.

We stop by the now-empty Studio B, which has a green-screen backdrop. This is where shows such as “NESN Sports Today” are filmed. Appearing to be in a brick warehouse, in reality those anchors are here in our backyard filming. Back in production control, still only a couple of people are needed in preparing for a pregame show like this one, even on top of having a youth hockey team joining them on the set. Lots of the material is prerecorded, and not many bodies are needed in the room during the game, either.

Today, the feed comes from the NESN mobile truck stationed in Toronto outside the arena. It is relayed back via satellite. For home games, there is a high-speed fiber optic cable running from TD Garden to the studio in Watertown, making for slightly less delay on the live broadcast.

For the men and women in the NESN offices, work has been going on for hours before. The director will often arrive around noon time to prep for a 6:30 show leading up to a 7:00 game like the Bruins have tonight. Most of the work is done beforehand, like writing the scripts and setting up the “rundown” (the order of segments and clips), and monitoring the audio. At NESN there are less than 200 full-time employees, mostly in production and operations. There is a large tech department. Being a staple New England channel for historic franchises, NESN attracts plenty of advertising and the sales department is not as large as it might be.

The Pee-Wee Saturday program has run, and now the pregame show with just Arnold and Jaffe begins. They will then turn things over to Jack Edwards and Andy Brickley up in Toronto for the call of the game. They will come on again during the intermissions and for the post-game recap. (The Bruins would end up losing, 4-2.)

All is wrapped up around 10 p.m. in the main studio. However, there is still talent on air until much later that night. The crew will film live shows up until midnight, and will then tape “NESN Sports Update” once the final scores are in for all of the local teams.

Clearly, there a plenty of opportunities to help bring local teams to life, and they may be closer than we think. Maybe even right in our backyard.