Ben Landry leader on, off the field

Two-way senior lineman to be in middle of action Friday night when Watertown plays at Somerville in MIAA Div. 5 playoff game 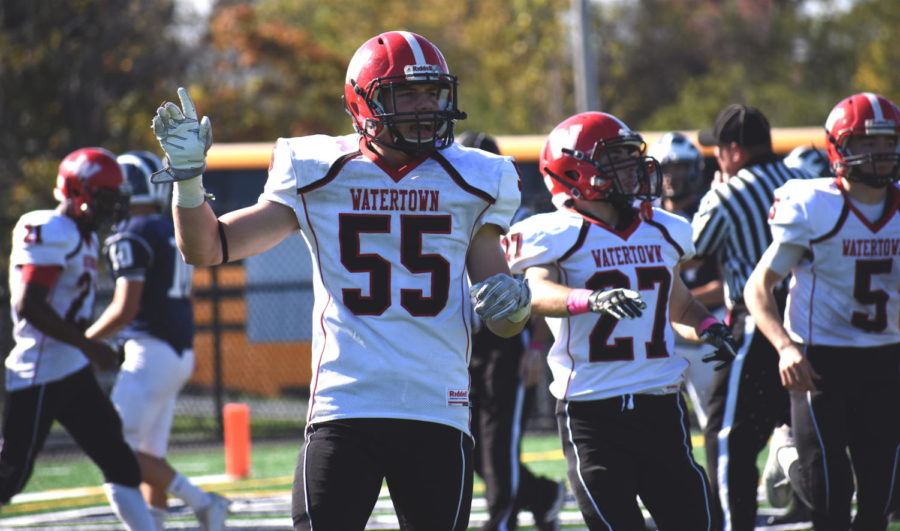 Ben Landry (55), a senior captain for Watertown High, is a big reason the Raiders are again in the MIAA Division 5 playoffs.

Heart. Passion. Hard work. These all come to mind when you mention senior football player Ben Landry to his Watertown High teammates.

Watertown is one of the smallest teams in the Middlesex League, and consequently most players play on both sides of the ball for the entire game. Landry certainly does his share and more; he almost never misses a snap on both offense and defense. Everyone in the WHS crowd recognizes No. 55 in red and white, perennially shutting down offenses as a defensive end and pushing the team down the field as a tackle.

Landry spent the first three years of high school being homeschooled, but for his senior year he is now enrolled at WHS. A three-season athlete who has played football for Watertown since his freshman year, Landry says only not much has changed in terms of football because of his move to attend the high school, but it does have some benefits.

“I do feel closer to my team than I have felt in the past. I know guys a lot better and I have better friendships with them,” he said.

As a senior, Ben has become a leader on the team, and this comes with many new responsibilities. Named one of three captains following the end of last season (along with classmates Matthew Muldrew and Jake Matton), Ben has stepped up to the role with his full effort. He notes that he feels a lot more responsibility in looking after the younger guys on the team. Captaining a varsity sport is clearly no easy feat.

“It is hard,” admitted Landry when asked what the experience of being captain was like. “People told me in the past that you know good leadership when you see it, but it’s hard to do it yourself, [and they were right]. We’ve definitely had good leadership in the past, with players like Zach Rimsa, Farid [Mawanda], and Steve Mey.”

Landry thinks of those players who helped him when he was younger now that he is in the authority position.

“You have to hold yourself to a higher standard,” he said. “But I do enjoy it and I am thankful that they chose me to be captain.”

Ben’s teammates speak highly of him. Junior Yoseph Hamad said even though he doesn’t play the same position as Landry, he still benefits from his leadership.

“He is a tremendous leader, very hard working. He did a lot of things in the offseason to get better,” he said. “On the field, he plays tough, and doesn’t take any snaps off. He’s a positive influence on the younger kids on the team that want to play varsity in the future.”

Although he is not the flashiest of players, Landry can always be counted on to come up with crucial stops. Often times the players who contribute the most to a team don’t show up in the headlines with eye-catching statistics. However, they are always known and respected by their teammates as the driving forces behind important victories. Ben would undoubtedly fall into this category.

Landry was thrust into high-stakes varsity action at an early point in his high school career, and hasn’t stopped competing since.

“In our second playoff game against North Reading my sophomore year, our starting defensive end got hurt, and I had to play for him. That was my first real varsity game,” he said.

The Raiders got the important win that day in his first real taste of football. He now plays defensive end and offensive tackle, and at times has even filled in for fullback when the team needed it.

Landry’s plans for after high school are not finalized. He says his future playing football depends on where he attends college, and whether or not the school has a team. He may also run track in college, the sport he plays in the winter and spring seasons.

When looking back on his high school career, he says he will definitely have fond memories of his time spent in the WHS uniform.

“Obviously as a senior, you’re sad to look back and see that your high school football career is about to be over. I’m thankful that I played football in high school,” he said. “Every year I’ve had some really good coaches who have helped me with everything, and when I was younger I experienced some great leadership.”

For the meantime, though, he is focused on finishing out this season. The No. 6-seeded Raiders went an underwhelming 3-4 in regular-season action, playing in the tough Middlesex League. But they came away with the surprise 31-27 upset of No. 3 Swampscott in the first round of the playoffs Oct. 28. With the win, Watertown advanced to the semifinals and a game at No. 2 Somerville (6-2) at 7 p.m. on Friday, Nov. 3, at Dilboy Stadium.

Ben says this season for Watertown may not be as it appears on paper.

“Our team has played really well in some of those close games that we lost against the Middlesex League, which is so good this year. We only messed up a couple of plays that decided the outcome of those games,” he said. “Now that we are coming off a playoff win where I thought we played very well. I really think we can win this Friday.”

Landry credits the team coming together as a group for their late success.

“At the beginning, we weren’t as close together, but I think since then we’ve become a lot better friends, and  more guys have bought into what we are doing.”

The Raiders will hope to continue their success and pull off another upset victory. Landry is determined to win this game, for an important reason, and he believes Watertown has a good chance to do so.

“I would really like to win the North final, because that’s a game we’ve lost two years in a row now,” he said. “I think we have some really good momentum, and other teams are going to realize that we are better than our seeding.

“Our coaches are really good at using their game plan to take away what the opposing team is good at. We just need to play well and be disciplined.”

Being the underdog obviously didn’t prevent the Raiders from coming away with the win against Swampscott last Saturday. On Friday night, they look to keep that momentum going and march their way into their third straight Division 5 North title game. In front of the Raider faithful, and under the lights at Dilboy Stadium, Watertown will look to Ben Landry, the tenured seniors, and anyone else who is willing to step up to dig out the victory.